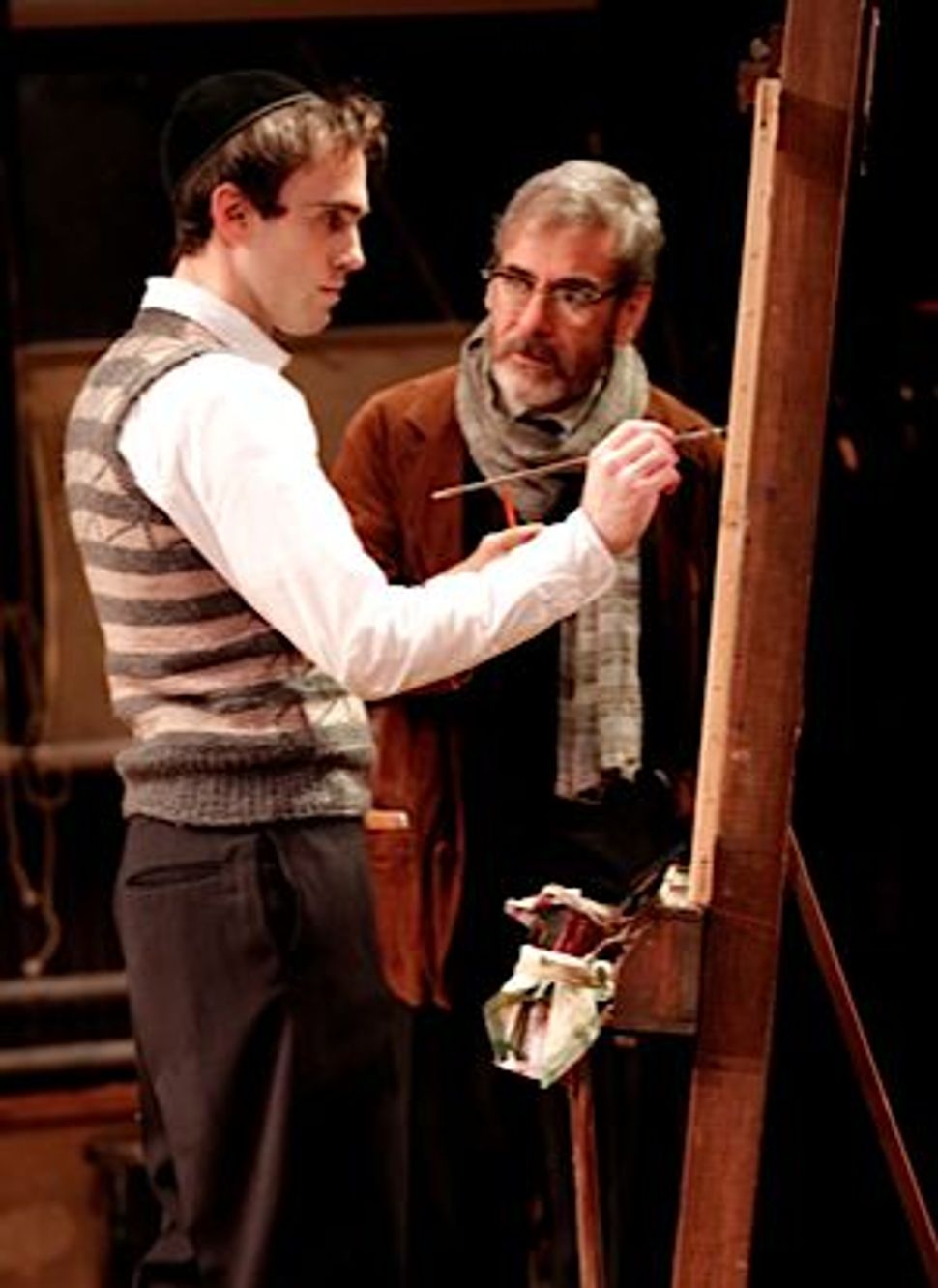 The most basic advice given to every would-be author is to write what you know. And Chaim Potok did just that.

His best and most popular novels — “The Chosen” and “My Name Is Asher Lev” — are about boys struggling between their ultra-Orthodox upbringing and secular destinies. In “The Chosen,” the protagonist, the son of a hasidic rebbe, wants to be a psychologist; for Asher Lev it is art that draws him from his family.

Though not hasidic, Potok was raised in an Orthodox household where reading and writing on non-Jewish subjects was discouraged. But for Potok, who was also an artist, there didn’t seem to be a choice.

And so it is with his creation, recreated on stage in “My Name is Asher Lev,” currently playing the West Side Theater, an off-Broadway shtetl that also houses “Old Jews Telling Jokes.”

The basic story is familiar. Asher (Ari Brand) is raised in the strict hasidic environment of Brooklyn. His father, Aryeh (Mark Nelson) is one of the rebbe’s most trusted aides and spends his time trying to save Jews in the Soviet Union. His mother Rivkeh (the unfortunately named Jenny Bacon) is a traditional sheitel-wearing Jewish mother and wife.

Asher has a passion and talent for painting that cannot be denied, despite the protests of his parents. Like Potok (an ordained rabbi), Lev tries to please two masters: his faith, his parents and his community on the one hand, and himself on the other.

For a while it appears he can pull it off. The rebbe places him in touch with a secular Jewish admirer, an artist of some repute, who agrees to tutor young Asher, and ultimately his parents come to grips with his dual life, until Asher paints a picture that infuriates them and the rebbe and forces his exile from the community.

Playwright Aaron Posner has done a creditable job adapting the novel; the play received excellent and well deserved notices during a recent run at the Long Wharf Theater in New Haven, Conn. Audiences are sure to be captivated by the play’s universal themes.

Still, the production is somewhat damaged, ironically, by exceptionally strong performances by Bacon and Nelson.

Rivkeh was very close to her brother and the primal scream she lets out when she hears’ he’s died in auto accident is the emotional high (or low) point in a play that should be about Asher. It is Rivkeh who visibly suffers from depression, who comes out of her shell to become more independent, who stays behind with her son when her husband takes an assignment in Europe. Bacon gives so strong a performance she almost hijacks the play.

Like Nelson she performs multiple roles, and when she transforms into the gallery owner who promotes Asher’s work, it’s as though she’s a completely different person.

Nelson, too, plays multiple roles, including Kahn and the rebbe. And like Bacon, his transformations are seamless.

Brand is certainly competent, but he spends much of the time as the narrator of his life, a living voiceover who moves things along. More often than not, he speaks his anguish rather than shows it.

Nevertheless, “My Name is Asher Lev” is a more than worthwhile experience. Bacon’s performance alone is one that will stay with you long after you leave the theater.