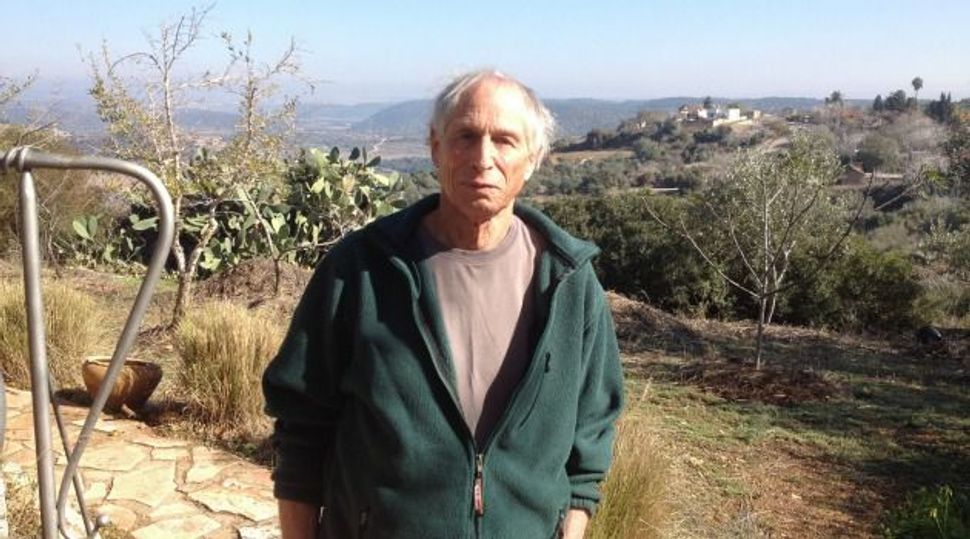 A Life With Advantages: Hillel Halkin?s home in Zichron Yaakov has a cozy, rural feel. Image by Nathan Jeffay

Back in 1977, a young writer published a bold book that tried to propel aliyah, or emigration to Israel, to the heart of the American Jewish agenda. Hillel Halkin, who had made the move himself from New York seven years earlier, didn’t mince his words, and declared the Diaspora “doomed.”

The future of the Jewish People, he told an imagined correspondent in “Letters to an American Jewish Friend: A Zionist’s Polemic,” was only in Israel.

It was a book that got under the skin of American Jews, because it wasn’t only about emigration; he presented much of the American Jewish way of life as hollow. Some of the trends he criticized have since flourished, such as Jewish rituals with a feel-good emphasis.

Halkin was — and remains — secular, but what many consider America’s flourishing Jewish creativity, he considers a distortion of Judaism.

Geffen Publishing has just republished the book. Between 1977 and today, Halkin has enjoyed a successful career as a journalist, writer, translator and author — which has included stints as the Israel correspondent and columnist for the Forward.

The children who were babies in the book are now grown up. Israel is more than twice the age it was when he was writing. And while the home that he had just built back then still has a rural feel, especially when he lights a cozy fire for our conversation, the rest of Zichron Yaakov has gentrified and become a popular commuter base for Tel Aviv. While he admits to being “young and rash” when he wrote the book, he tells the Forward’s Nathan Jeffay that it still rings true.

Nathan Jeffay: In your book, you presented Israel as a “community of faith,” committed to the revival and survival of Jewish life in a Jewish state. Do you still have the same sense of it?

Hillel Halkin: Personally, yes, although I think that perhaps fewer Israelis do nowadays than they did then. But I believe that many still find that kind of meaning in living here, even if they don’t go around declaiming it. The eldest of my two daughters was three years old when I wrote my book. She went to college in New York, continued on to graduate school, and for years didn’t want to talk about coming back to Israel — we were afraid we had lost her. And then she returned, and about a year after she did, she said to me one day, “I had a terrible nightmare last night.” “What was it?” I asked. And she said: “I dreamed I was still in America. I’m so happy to be back.”

She didn’t state that in Zionist terms. She didn’t put it ideologically or say, “I’m so happy to be part of Jewish history again in a way that I wasn’t in New York.” There are many reasons she likes being in Israel better than being in America. But I think both my children do have a sense of living in country that gives their life a significance it wouldn’t have anywhere else.

You argue in your book that Diaspora Jewish communities were “doomed” and predicted that the Diaspora will “effectively cease to exist whether there are Jews still living in it or not.” Of this, you said, you were “certain.” Are you still?

I think my original prediction of total doom for Diaspora Jewry was somewhat exaggerated. What is in the long run doomed — this has become more obvious to many American Jews as a result of the Pew Report — is non-Orthodox Judaism. The American experience has shown that there are, over time, no stable halfway houses. Jews who do not live wholly Jewish lives — who are not willing to undergo, for the sake of their Jewishness, some form of religious and social re-ghettoization — will sooner or later end up living wholly non-Jewish lives. And if one is going to re-ghettoize, surely life in a Jewish state has its advantages compared to life in an American ghetto.

But didn’t you also write in your book that Orthodoxy “cannot hold out indefinitely as it is”?

If I had been less young and rash, I would have qualified that, too. It’s clear that there will be an Orthodox Jewish community, whether Haredi or Modern, in the Diaspora a hundred years from now, too. No doubt there will be one in a thousand years. But as someone who is not a believing Jew in any traditional sense, I find that supremely uninteresting. The fact that Jews can go on indefinitely davening mincha in New York or London neither comforts me nor speaks to my sense of Jewish possibilities. It’s not a great challenge for a people to go on doing what it always has done. Will there be Jews who do it anyway? No doubt.

But why such pessimism about non-Orthodox Jewishness in the Diaspora when it appears to be so vital, with all sorts of new and creative expressions?

I think this vitality is, viewed historically, a very temporary phenomenon. It’s coming more from without Judaism than from within. Of course, you can make the argument that Jews have always interacted with the outside world and absorbed its influences, so why not in America today? But there’s an enormous difference between Judaizing such influences, which is what Jews have done in the past, and the Americanization of Judaism that one sees today.

Your comments remind me of an article you wrote about the popular idea of tikkun olam. You argued that this is a contemporary distortion and that traditional concepts of tikkun olam had nothing to do with promoting social justice outside of the Jewish community.

Tikkun olam has meant various things in Judaism, ranging from practical social legislation to various mystical practices, but it was never until recently thought to involve political or social action in the non-Jewish world. Rabbinic Judaism conceived of Judaism as a blueprint for creating a perfected society for its own adherents, not for humanity at large. Humanity, as far as the rabbis were concerned, could learn from Judaism or not, as it chose. It was Judaism’s task to change it by example, not by direct involvement.

This brings me to a part of your book in which you wrote to your “American Jewish friend” to criticize an inspirational, “feel-good” communal Shabbat, with uplifting song and prayer, spent by him and his companions. You were very dismissive, even disparaging, of this kind of attempt by Diaspora Jews to create positive new rituals

It’s not my job to tell Jews what kinds of Judaism they should or shouldn’t practice. I can only say that 10 or 15 years ago, someone persuaded me to attend a Yom Kippur eve service in a Manhattan synagogue. It was great fun, with lots of singing and jumping and hugging and kissing and clapping of hands, and everyone went home feeling they were having a wonderful time being Jews. If I hadn’t known it was Yom Kippur, I might have thought it was Purim. Is it fair of me to laugh at that? Perhaps not, but I do. If being Jewish is a matter of feeling good, you’ll be Jewish for just as long as it takes for something else to come along and make you feel even better.

The Shabbat I criticized was, in my opinion, a kind of play-acting — acting in which, as good actors sometimes do, everyone got so into their roles that they forgot they were acting. It’s one thing for Judaism to permeate every minute of your personality and life. It’s another to make of it a costume that you can put on and take off at will. A great deal of American Jewish life is a costume party.

Your negative view of Diaspora Judaism contrasts starkly with even small manifestations of Jewish culture in Israel. In your book, you lauded a non-observant friend of yours who ties a string to her cholent pot because this is what her family did in Poland to distinguish it from the neighbors’ pots . Why are you so negative about reinterpretations of Jewish tradition — even when made with great effort, in the Diaspora — but enthusiastic about effortless engagements with Jewish culture in Israel?

The cholent pot was a parable that was of no importance in itself. Any genuine culture is composed of thousands of such unreflected-on habits and customs that one generation passes down to the next. This was simply an example that I picked.

I don’t know if a lasting secular Jewish culture can be created in Israel. I do know that one can’t be created in the Diaspora. A culture is not about maximals; it’s about minimals. A Jew who wants to be a “maximal Jew” in the Diaspora can — with “great effort” as you say — be one. What Israel can create that the Diaspora cannot is millions of “minimal” Jews who are making no effort at all but just doing what comes naturally.

You can compare Jewish life in the Diaspora to a large table with many Jewish balls on it, all in motion; when one reaches the table’s edge it falls off, and that’s it. You’ll never see it again. Jewish life in Israel is like a billiard table; the balls can roll only so far before hitting the side and bouncing back. There’s a limit to how non-Jewish even the most non-Jewish Israeli can be. He’ll never fall off the table.

What would you say a “maximal” Jewish life in secular Israel would be like?

I think it would be the life of an Israeli who, even though he is personally non-observant, is familiar with Jewish history, with Jewish texts, with Jewish liturgy —who can, let’s say, walk into a synagogue and know what’s happening and what is expected of him. I think such an Israeli would have a sense of the thousands of years of Jewish life of which he is the heir and whose future depends on him and on his fellow countrymen. He would live with the consciousness of taking part in a great Jewish adventure, one of the greatest the Jewish people has ever lived through. He would be proud and happy and grateful to be part of it. I know I am.