David Krakauer Gets ‘The Big Picture’ 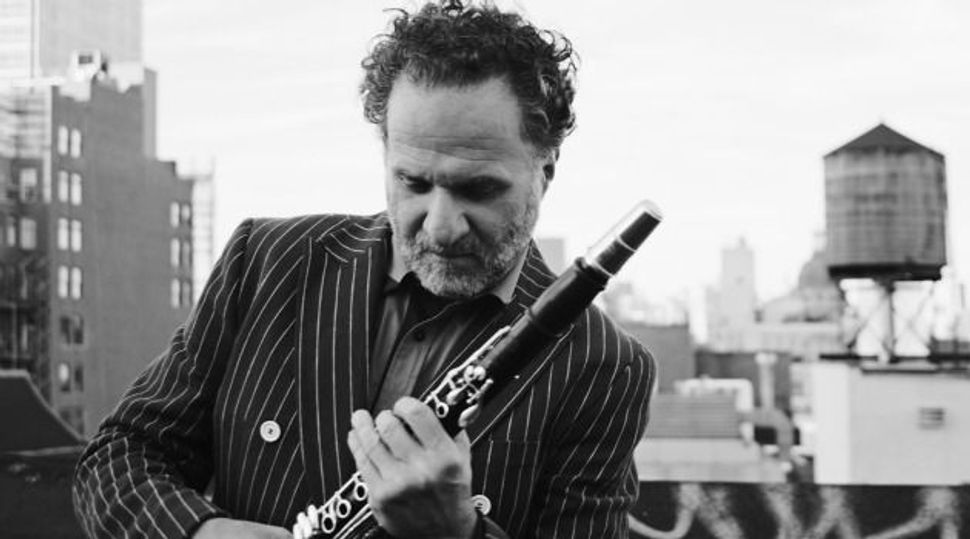 You wouldn’t think that a musician of David Krakauer’s caliber would be looking to put a new spin on his work, what with a nearly 30-year track record of virtuosity playing chamber music, klezmer and, most recently, a thrilling mash-up of funk, hip-hop and klezmer. But Krakauer’s manager, Steven Saporta, broached the idea of the clarinet player reinterpreting movies scores that have Jewish themes.

“At first, I have to say I was a little bit skeptical,” Krakauer recalled. “I create all my own material. I write my own stuff. This is all about my take on things.”

But Krakauer was intrigued. And now, the 57-year-old musician is unveiling his latest musical foray, “The Big Picture,” in which a new sextet will perform onstage with original videos projected onto a screen behind them. Table Pounding Records has just released a CD of the same name, with a dozen movie instrumentals. “There are a lot of projects I have done that have been more avant-garde, more edgy,” Krakauer said. “But to make this really fit into my whole story was a great challenge. And so in that sense, I think it is one of my most adventurous projects.” The Krakauer story includes a complicated relationship with jazz. Considered a teenage jazz prodigy, Krakauer abandoned jazz music by the time he went to college.

“I moved away from jazz because I was afraid I didn’t have anything to say in jazz next to Coleman Hawkins and Sidney Bechet and Louis Armstrong and John Coltrane,” Krakauer said. “I felt like, ‘Where am I going to find my place?’”

It’s no secret that Krakauer idolizes Bechet, the great reed player. At the suggestion of their son’s clarinet teacher, Joel Press, Krakauer’s parents gave him one of Bechet’s LPs when he was just 11 years old.

“That totally changed my life,” said Krakauer, who has referred to Bechet as the teacher he never met. Bechet’s “Si Tu Vois Ma Mere” is used in Woody Allen’s “Midnight in Paris,” which, Krakauer concedes, he included in “The Big Picture” even though it lacks a Jewish moment.

“To actually cover a Bechet piece was a daunting task for me,” he said.

Krakauer had previously paid tribute to Bechet in a rollicking 1997 composition titled “Klezmer a la Bechet.” Klezmer, it turned out, played an instrumental role in Krakauer’s return to jazz. Years spent as a standout member of the Klezmatics and then leading his own band, Klezmer Madness, allowed Krakauer to improvise in a way that is clearly influenced by jazz players.

That jazz influence comes through loud and clear on the new “Big Picture” album. In addition to “Si Tu Vois Ma Mere,” the CD highlights traditional jazz on “Body and Soul” from Woody Allen’s “Radio Days,” “Honeycomb” from the movie “Lenny,” “Willkommen” from “Cabaret” and “People” from “Funny Girl, which features Krakauer on bass clarinet and jazz violinist Jenny Scheinman.

Scheinman can also be heard wailing away on “Tradition” from “Fiddler on the Roof.” Krakauer viewed the film as “hackneyed” and was reluctant to include it in the “Big Picture” project.

“In our initial meetings, I said there’s no way we’re going to touch ‘Fiddler on the Roof’ with a 10-foot pole,” Krakauer said. “And then something came to me, and I said: ‘Okay, gentlemen, I am going to do this arrangement. I’m going to take care of this.” The sextet rocks hard on that track, which includes elements of klezmer, swing, avant-garde jazz and funk. “Keep It Gay” from “The Producers” is chock full of Broadway musical swagger. Krakauer chose not to reinterpret “Springtime for Hitler,” the number with goose-stepping dancing girls, even though it is one of his favorite cinematic moments. “I think that’s almost too obvious,” he explained.

Light of Day, a Manhattan television production company that specializes in TV commercials but has also done music videos for Beyonce, made original videos for the “Big Picture” project. Leo Nguyen, the 27-year-old head designer at the firm, said one of the biggest challenges was creating videos for a medley of tunes used in movies with a Holocaust storyline. Light of Day did not use footage from any of the films themselves. Instead, it employed 3-D modeling software and digital animation to create visuals of the Brooklyn Bridge for “Sophie’s Choice,” a staircase made of piano keys for “The Pianist” and train tracks for “Schindler’s List.” The latter film is part of the live performance but is not on the CD.

“Some pieces deviated more from the storyline,” Nguyen said. “In the ‘Midnight in Paris’ video, we just wanted to highlight all the quotes from Hemingway and Fitzgerald and other American writers featured in the film instead of showing Owen Wilson gallivanting around Paris.” Typography was also used in videos for the music from “Keep It Gay,” where Yiddish dictionary entries of words used commonly in English appear on the screen, and “Tradition,” which features translations of the song’s title word in many languages and typefaces.

Krakauer’s sextet will perform the “Big Picture” concert twice a week during a four-week run at Lower Manhattan’s Museum of Jewish Heritage — A Living Memorial to the Holocaust starting on January 29. The 375-seat auditorium features a 22-foot-wide screen and [a grand piano that is held in high esteem in the jazz world.

“It’s a departure for the museum,” said Gabriel Sanders, director of public programs. “There was a hunger on the part of the museum to do something big. We’ll do things that’ll happen once and they’re over, so this was a way of doing programming kind of like what we do with an exhibition.”

David Krakauer Gets ‘The Big Picture’