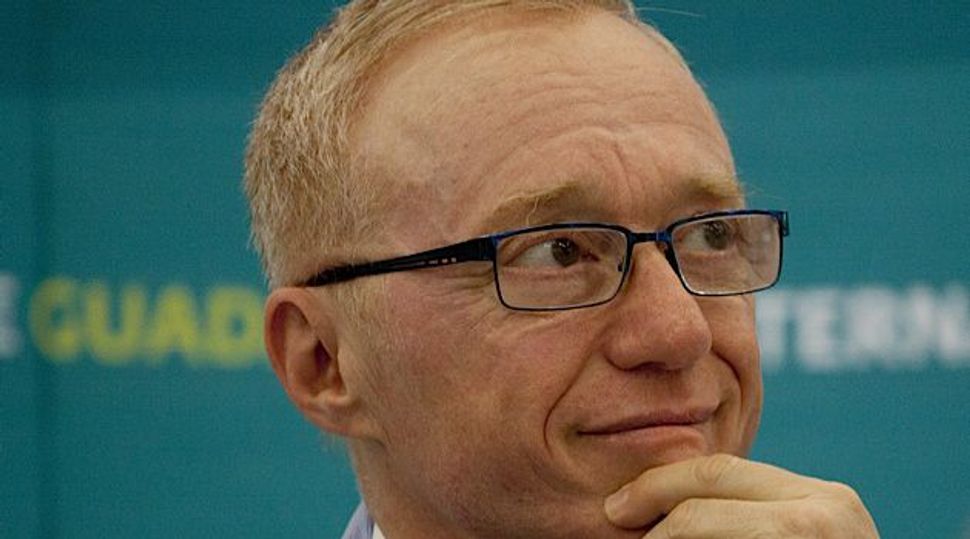 The Same Sea Twice: Grossman?s latest could serve as an emotional sequel to ?To the End of the Land.? Image by Getty Images

For readers left feeling bereft after David Grossman’s portrayal of the relation between the life of a family and the tragic corrosiveness of Israeli militarism in “To the End of the Land,” here is an audaciously unorthodox work that may serve as an emotional sequel of sorts. If we assumed that Grossman could hardly delve deeper than that book’s wrenching portrait of individuals emerging from terrible suffering (only to confront more ominous horizons), our answer has arrived in the form of a thrilling lament.

Set in a strangely timeless land (that is pointedly not Israel), “Falling Out of Time” begins with the agonized declaration made by an individual identified only as “Walking Man.” In a brittle speech, he informs his wife that even the ordinary ritual of their dinner has become unbearable and sets off on a quest to find their son who has been dead for five years. Wandering disconsolately, Walking Man’s ever-widening gyres of private grief inexorably draw in other townspeople, each struggling with their own lonely loss. Gradually we become acquainted with a “Canterbury Tales”-like assemblage of others (the Town Chronicler, Cobbler, Midwife, Elderly Math Teacher, even a Duke), each a mourning parent. Though Grossman initially stresses the excruciatingly solitary nature of grief, his vulnerable townspeople gradually awaken and respond to the presence of the others; their losses engender a deeper sense of human community.

For years each has stoically suppressed both memory and language; now as they stumble haltingly forward into life and speech, Grossman’s numinous rendering of their language captures both the ineffability of melancholic depression and the peculiar cadences of its linguistic manifestations: stuttering rhythms, broken logical sequences, parataxis and hypotaxis. Grossman’s greatest achievement here is voicing the townspeople’s discordant rhythms in language so raw and immediate that they never feel less than achingly real on the page. Officially categorized by its publisher as “part play, part prose,” neither quite captures the poetic multidimensionality of the narrative’s shifting perspectives nor the startling effects of the interplay among characters coping with inimitable memories of those they have lost.

Grossman’s experimental collage of genres and styles might remind some of his friend Amos Oz’s foray into free-form verse in “The Same Sea.” In that work, Oz took a meditative sabbatical from his country’s derangements to examine a tapestry of unsettled characters, their yearnings and tenuous relationships to memory and geography. Yet if the experimentalism of “Falling” may be a partial homage, the stakes here feel far more consequential, perhaps because Grossman’s own anguish was the catalyst for probing whether art really can serve as a meaningful balm for unbearable loss and absence.

At one time or another, each character may serve as a surrogate for Grossman himself, none less than the Centaur (a hybrid like the mythological creature, he is half-man and half-desk rather than horse), an embittered artist whose caustic judgment against himself also seems to obliquely incriminate the naïve novelist who had once presumed to capture the painful inner lives of others without having experienced an iota of real tragedy himself. At first, this mythical figure seems to bear a double burden that sets him apart: He is not just a grieving father but also one tasked with redeeming the suffering of others through his art. Yet ultimately he shares the struggle of all the others, their violent fluctuations of feeling inflicted by the painfully insatiable demands of memory, heroic exertions to live on without forsaking the dead.

Long after reading it, “Falling Out of Time” lingers in the imagination as a mourner’s prayer, at once profoundly Hebraic and profoundly universal (I would be very much surprised if some of its hauntingly beautiful passages were not adopted for official rituals of mourning and liturgy in the future). Its meditative language is both unbearable and irresistible. Here are hard truths, generously bestowed by one of our wisest and most compassionate artists.

The startling language of “Falling Out of Time” (translated by Jessica Cohen, who captures the chilling poetry of the Hebrew original in her deeply-attuned rendering) affirms once again that Grossman is one of a select group of contemporary writers who might, with some justice, be called a modern Ecclesiastes. He has long celebrated the sacred joys of the quotidian; thus some of the most deeply moving language here concerns the recollections of various characters cherishing the simple daily activities of their lost children being fed and put to bed at night. Less than three years after losing his son Uri, one of the last soldiers to fall in the Second Lebanon War (two days after Grossman protested its escalation), Grossman commenced the writing of this visceral lamentation, by which time he clearly knew as much as any of us ever will about the peaks and valleys of the grieving process. Intriguingly, “Falling” was published in Israel five years after Uri’s death, the same period of silence observed by all of its characters.

No writer has grappled more meaningfully with the vital difference between mere survival (of an individual or a society) and living authentically. And now that challenge has become painfully intimate. In the eulogy delivered at his son’s funeral, Grossman described answering his door in the middle of the night to be greeted by the IDF bearing the news of Uri’s death: “And I thought to myself — that’s it, life’s over.” Recently he tersely observed that the writing of “Falling Out of Time” was “a way of fighting against the gravity of grief.” In his essay collection, “Writing in the Dark,” (acknowledging the sometimes “paralyzing” effects of memory), he declares that “the act of writing creates for me a ‘space’ of sorts, an emotional expanse that I have never known before, where death is more than the absolute, unambiguous opposite of life… I write, and the world does not close in on me. It does not grow smaller. It moves in the direction of what is open, future, possible.”

The painfully restorative journey alluded to in those remarks seems fully honored by the starkly defiant affirmations uttered by two characters at the end of this harrowing odyssey; a hauntingly truthful declaration about art, life and absence that readers will not soon forget. This slim book’s dark music comes as close to Samuel Barber’s “Adagio for Strings” as language can possibly aspire. Frequently heartbreaking, yet ultimately profoundly consoling, “Falling Out of Time” is a triumphantly imaginative response to immeasurable grief and pain. A richly emotional, mystical and philosophical tapestry, it makes an urgent and eternal statement that deserves recognition among the greatest works in the brave and indispensable tradition of art that pushes back against catastrophe.

Ranen Omer-Sherman frequently writes reviews for the Forward. His most recent book is “Narratives of Dissent: War in Contemporary Israeli Arts and Culture.”