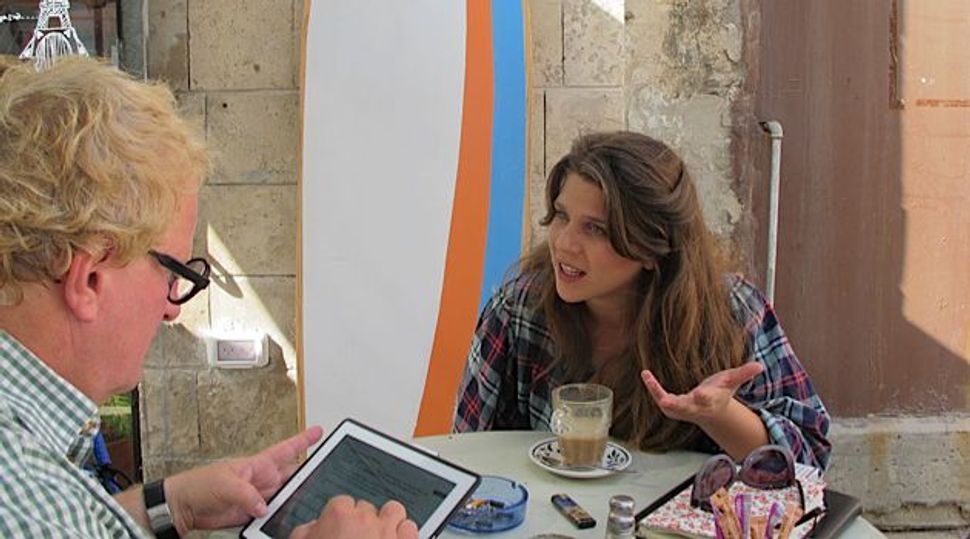 One More Cup of Coffee: Tuvia Tenenbom meets with Daphni Leef in a Tel Aviv café. Image by isi tenenbom

In summer of 2011, Daphni Leef’s apartment lease expired but she failed to find a new, affordable rental.

Forced to leave her abode, Daphni pitched a tent on the luxurious Rothschild Boulevard in Tel Aviv, igniting a social protest that eventually saw hundreds of thousands of Israelis taking over streets all over the land, pitching their own tents and loudly demanding immediate social change. Never before, nor after, have Israeli streets turned into a real home for so many people.

Some of those who hopped on Leef’s wagon in those days benefited enormously from their ride with her. Itzik Shmuli and Stav Shaffir, for instance, are members of the Knesset. But Daphni is as far from joining the Knesset as I am from being the next leader of China.

Why isn’t Leef, the heroine of Israel’s streets, at least a Knesset member, if not a prime minister? I don’t know. What I do know is this: These days Daphni lives in Jaffa, as a normal citizen, and I go to meet her. We sit in a street café of her choice drinking, talking and smoking.

“Daphni, you succeeded in getting thousands of people to the street demanding social change, something nobody before you did,” I said. “How did you do it?”

“I don’t know how to answer this question. You have to ask the people why they went to the street.”

“I’m not asking for an absolute answer, just for what you personally think.”

“I don’t know. Perhaps it helped that I’m a middle-class woman, a white woman, which framed what I did as a ‘news story’ that the media found interesting. One TV reporter, for example, was interested in this story because he thought that it would provide a good example of how you cannot make a revolution in Israel. Of course he was wrong.”

“Your social revolution ended, and failed. Why?”

“If you think it ended, you don’t read the map correctly. If nothing else, the protests changed the ‘conversation’ in Israel; now people are talking about social issues. But it takes time for a social change to take shape. We will be able to measure this change in 20 years or so.”

“What do you think will happen in 20 years?”

“I can’t frame it for you in exact terms. The whole world is going through a change, not just Israel. In the past we had the Industrial Revolution, and now we are going through the Information Revolution, which will cause many changes in society. Up to our time, very few people controlled information, and it is information that shaped society into what it was, but this control is now crumbling. There was a world before Wikileaks, but now a new one is replacing it.”

“You advised me before to ask people, and I actually did. I asked them if the protests made any difference. They told me that they went to the street hoping for a change, but nothing has changed. The system is corrupt, they told me, and they don’t think anything will ever change.”

“The change in the Knesset is an example. Yes, what’s happening in the Knesset today is cynical but still: The fact is that in the present Knesset there are 50 new MKs (out of 120), and this is a direct result of the protests.”

“Let me ask you a more personal question. Everybody knew the social problems in this land, and the inequalities in wealth, and yet nobody did anything about it for generations. What made Daphni Leef wake up in the morning and decide to make a revolution? What is it in you — a personal trait, education or whatever — that makes you different?”

“I don’t feel comfortable to answer this question. Let others do it.”

“Well, let’s go back to the protests, which are long over. What is Daphni Leef doing these days?”

“I’m in a period of pondering, observing, thinking of my future steps. Meantime I make a living, I work.”

“Video editing. I’m working on my own movie, a documentary. Also, once a week I work as a reception clerk at a beauty salon.”

“Are you in touch with Itzik and Stav?”

“They boarded your train, but they got off at a totally different stop than you did.”

Leef, a clerk in a beauty salon instead of a parliament member, won’t say a bad word against those who reaped the fruits of the seeds that she has planted. These days, not only is Daphni not a legislator but she is also on the exact opposite side of the law: A criminal case in which Daphni is accused of rioting and using force to prevent lawful arrest during a social protest is still open. And I ask myself: How come this leader is faring so badly?

This is not the only question I have about Leef. Jaffa, part of the Tel Aviv municipality, is where many leftist Israelis reside, spending much of their time and energies criticizing Israel’s handling of the conflict with the Palestinians. I thought that she would behave in the same manner, but she doesn’t. I am sitting here with her for over an hour but she does not utter a single word about the Israeli-Palestinian conflict.

“What’s wrong with you, Daphni?” I ask her. “How come you don’t even mention this issue?”

“I think that religious fundamentalism in both societies is the main cause of the conflict. I’m not proud of my government’s handling of the conflict, but there is a lot of hypocrisy on both sides, and on the side of the Europeans and the Americans, who are also involved in this conflict. To say that the responsibility lies only with the Israelis is a naïveté.”

She also blames the media.

“If you go to Jaffa’s beaches, you’ll see hasidic couples dating, you’ll see women with bikinis, and you’ll see Arab families having barbecues,” she says. “Nobody bothers anybody, because all they want is one thing: the beach. But you don’t hear about them in the news, because it’s not an ‘item’ and it’s not a ‘story.’”

“When was the last time that you went to visit Palestinian cities?”

“I was never there.”

“This is the first time I’ve been asked this question.”

“And what’s your answer?”

“I have no answer. This is a loaded question,” she says and, at this point, she gets animated, raging against what she calls “peace industry.”

“Look at all those amazing foreign missions in the middle of Ajami (a neighborhood in Jaffa) that are here because they want to show everybody how pluralistic they are, but the fact is that they are spitting at the faces of the poor. They have those f–king mansions in the middle of the poorest neighborhood in Jaffa, which create huge divides between the haves and the have-nots. Look at the Peres Peace Center: They don’t have one window pointing at the neighborhood! Do I need to visit the occupied territories to witness racism? I see it here. People are making money out of the concept of peace but the truth is that they have a financial interest in all this. They are not about making peace but about talking about making peace. I find it bizarre when tourists from abroad come to the occupied territories to see poverty and pain. To make peace you need two things: You need a broad enough support from within, a grassroot support, and you need courageous leadership, not NGOs coming from the outside. There is so much ‘peace’ money going to Palestinian areas; it has become a business. What will happen when there is peace? What will those NGOs do? There is nothing I want more than peace, but what I can do right now is peace within the country, to make sure people don’t live in poverty. There are people here who are in pain. I don’t care if they are Arabs or Jews; I just want their pain to end.”

The people whose pain Leef feels include the Gaza settlers who were evicted from their homes when Israel withdrew from Gaza in 2005. To this day, many of the evacuees still have no permanent home, a large number of them have developed acute mental problems, and the divorce rate in this community is the highest in Israel.

“Who cares for them?” Leef asks. “I think that one of the biggest hypocrisies of the Israeli left took place when those who call themselves ‘leftists’ did not stand by the settlers who have lost their homes. If you believe in human rights, how could you ignore the people who lost everything? Today, there are about 200,000 people living in Judea and Samaria, does anybody talk about what to do with them if they were to be evacuated? Why don’t we care? By the end of the day, we are all people, if we agree with each other or not, and we have to treat everybody with respect. When you grade people according to their political views, putting at bottom those you don’t agree with, you are not any better than those you call ‘racist’ or whatever name you give them.”

In my experience, Israeli right-wingers call the West Bank “Judea” and “Samaria,” and its left-wingers call it part of the occupied territories. Daphni uses both terms interchangeably, effectively mocking both right and left. Could this be the reason, or perhaps one of the reasons, why Leef drinks her coffee on the street and not in the Knesset’s cafeteria? I don’t know. What I do know is this: Wherever she is, one cannot avoid noticing how blessed is the land that has Daphni Leef as its daughter.

Tuvia Tenenbom is the author of “I Sleep in Hitler’s Room.” He is working on the follow-up, tentatively titled “Alone Among Jews.”