Solving a Linguistic Mystery as Quickly as ‘Poof’ 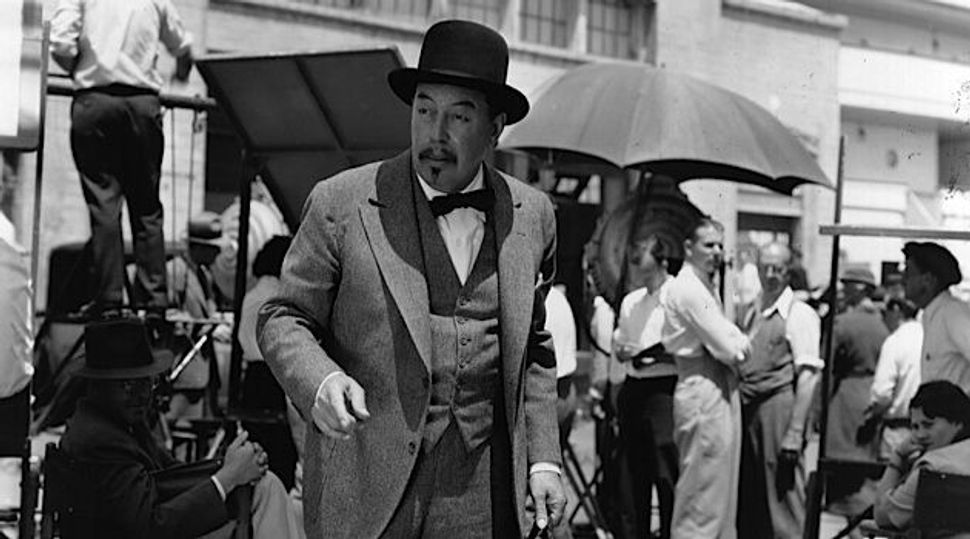 Number One Sleuth: The phrase ‘Piff, Paff, Poof’ was uttered in a 1937 film by Charlie Chan (played here by Warner Oland). Image by Getty images

It would be ironic if the single sentence for which John Kerry, an articulate politician, were to be remembered one day were “Poof!” And yet Mr. Kerry’s pithy description of a breakdown in Israeli-Palestinian negotiations whose failure surprised no one but himself may go down in history as his most memorable utterance. What is surprising is that “Poof!” turns out to have a Jewish angle quite apart from the Jewish state that the Palestinians negotiators didn’t want to hear about, one that goes back to the days when Theodor Herzl was still a boy wearing knickers in Budapest.

One wouldn’t expect this, because “poof” would seem to be one of those onomatopoeic words, like “buzz,” “gurgle” and “swish,” that doesn’t need anything in particular, let alone something Jewish, to explain it. “Poof, it’s gone!” we say — and though it might not be at the front of our minds, somewhere at the back of them is the sound we make when blowing out a candle. One second there’s a flame, the next there’s nothing but smoke. What better way could there be of conveying a sudden disappearance in one syllable?

And in fact, the first documented time we find “poof” used in such a manner in English, in 1868, this is the image attached to it. (Previously the word existed as only a variant form of “Pooh!” — that is, as an expression of revulsion or disapproval.) In that year, the now forgotten but then widely read British author Edmund Yates published his novel “The Rock Ahead,” in which a lengthy scene is set at a musical evening in London. The evening features an operetta written by the derivative composer Ferdinand Wisk, followed by the young soloist Grace Lambert, whose charm and talent steal the show. Depressed by being outshone, Wisk is consoled by “the fashionable music-master old Piccolo,” who is rumored to have been “allied with [the composers] Auber and Offenbach” in being the inspiration for Wisk’s operetta. “Miss Lambert’s triumph,” Piccolo tells Wisk, “is a mere succès d’estime, and she will go out like that — pouf!” Piccolo then illustrates the expression by “snapping his fingers and blowing out an imaginary candle in explanation.”

I will return to Yates’s odd spelling of “pouf,” but it would appear to be from his novel, or at least from the time in which it was written, that the word, spelled “poof,” entered English in the sense of, “Now you see it, now you don’t” and eventually became a magician’s term, especially in the sequence “piff, paff, poof,” which often accompanied the climax of vanishing acts. Starting in 1932, an annual Piff Paff Poof magicians convention was held in the United States, and the expression made it to Hollywood in 1937, in Twentieth Century Fox’s “Charlie Chan at Monte Carlo.” In the film, the Chinese-Hawaiian detective, the James Bond of his day, says of a triple murder, “And then three people are killed — piff, paff, poof — just like that.”

Was Boum using “pif, paf, pouf” as a magician’s term? Not quite. Pouf (pronounced “poof,” with the double “o” as in “food”) is onomatopoeic, too, but it is an old French word denoting not the blowing out of something, but the thud it makes as it falls to the ground, while pif-paf is Polish for “bang, bang!” Boum is declaiming, in other words, “Bang, bang, thud” — that is, “I shoot, and the enemy drops.” The English translation of pif, paf, pouf in the production of “The Grand Duchess of Gérolstein” that was staged the same year in London was, quite accurately, “With a bing, bang, bong.” That Yates saw this production a year before finishing “The Rock Ahead” and took “pouf” from it is indicated not only by his mention of Offenbach in the same passage, but also by his resort to the French spelling. And it was Piccolo who changed the meaning of the word from a thud to the breathy extinguishing of a flame that it was henceforth to have in English.

And from where, you ask, did Offenbach know Polish? He didn’t, but his father was a synagogue cantor in Cologne or Köln who must have known some Yiddish, and Yiddish borrowed pif-paf for “bang, bang” from Polish. Offenbach, who later converted to Catholicism, may have heard it at home as a child or picked it up in the Jewish environment he was raised in. Put that in your pipe and smoke it, John Kerry!

Solving a Linguistic Mystery as Quickly as ‘Poof’