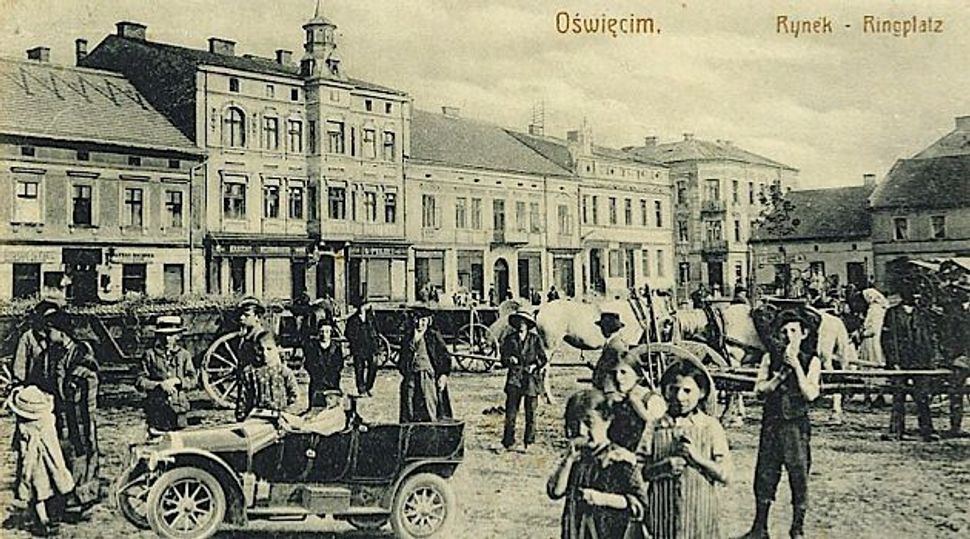 Shopping in Auschwitz: Many homes and shops near Oswiecim’s market square were owned by Jews. During the German occupation, Rynek (ring square) was renamed Adolf Hitler Platz. Image by Collection of Lukasz Szymanski

Of all the things and places to give an endearing Jewish name, Auschwitz would seem the most unlikely. Oshpitzin — which comes from the Aramaic word for guest, ushpizin, and is the name of a traditional Sukkot prayer that welcomes guests — was how Jews once referred to Oswiecim, the Polish town that would become the location of the Nazis’ deadliest camp.

Oswiecim, as we learn in a small, new exhibition of photographs at the Museum of Jewish Heritage in New York, was home to a thriving Jewish community from the mid-16th century until the Holocaust. Jewish life in the Polish town flourished from 1867, when Jews in the Habsburg Empire were awarded full religious rights and Galicia became a de facto autonomous region, up until the outbreak of World War II. Estimates show that the Jewish population reached an all-time high in 1939, when the majority of the town’s 14,000 residents, was Jewish.

Located at the confluence of Poland’s main river Vistula and its tributary Sola, Oswiecim had been a market town since the 1200s, known for its arable land and a medieval castle that still stands today. Germans were among the early settlers, calling the town Auschwitz, which is thought to be derived from the name of one of the early settlers. The first Ashkenazi newcomers from Central Europe arrived in the mid-16th century. According to a reproduction of a document displayed at the exhibit, Polish nobleman Jan Piotraszewski donated land to the Jewish community to build a synagogue and a cemetery.

In the mid-19th century, Oswiecim was connected to several major railway lines. On the eve of World War II, the town had between 20 and 30 synagogues, and a wide variety of Jewish organizations: Photographs show a gathering of more than 100 members of the socialist and Zionist Hashomer Hatzair movement next to an image of an Orthodox Purim celebration. The town was also a center of hasidic life, with three synagogues maintained by the Bobov sect.

“It’s easy to look at Jewish life through the lens of what was coming,” said Shiri Sandler, the curator of the exhibit and U.S. director of the Auschwitz Jewish Center, an affiliate of the Museum of Jewish Heritage. For this reason, the show focuses on the town’s vibrant Jewish life, which was completely eradicated once the Germans took over on September 3, 1939. By 1941, the entire Jewish population had been deported to three ghettos; 90% of Auschwitz’s Jews perished during the Holocaust. Most of the Polish population was forcibly moved to displaced person camps and the area inhabited by ethnic Germans, many of whom worked in the concentration camp.

Judging from what is on display, the interaction between Jewish and Polish inhabitants seems to have been mostly peaceful. One striking photo, for example, shows visibly observant and secular Jewish men as well as Poles working together to dig anti-tank trenches to prevent German troops from moving forward in the summer of 1939. Another shows a school class on a field trip to the village of Brzezinka (Birkenau). Some of the boys have their heads covered, others don’t. “The Jewish and Polish kids went to school together,” Sandler said. As she guides me through the exhibition, she mentions two periods of anti-Semitism, one at the end of the World War I, and another during the economic recession in the 1930s — but neither of them receives much attention in the exhibit.

Seventy-seven Jewish survivors returned to Oswiecim after the war. Most of them left the region by the 1960s, their lives made difficult under Soviet rule. The last Jew of Oswiecim, Szymon Kluger, a mechanic and electrician, died in 2000.

Jewish life in Oswiecim resembled that of many other towns in the region. Visitors with background knowledge about European Jewish history might find the story being told highly familiar. But the novelty, Sandler said, lies in the name: “It tells a story that is a new one to most Americans who didn’t know that the name Auschwitz could stand for anything else but a concentration camp.” Or who didn’t know that Auschwitz once had a Jewish nickname.

Anna Goldenberg is the Forward’s arts and culture intern. Contact her at [email protected]