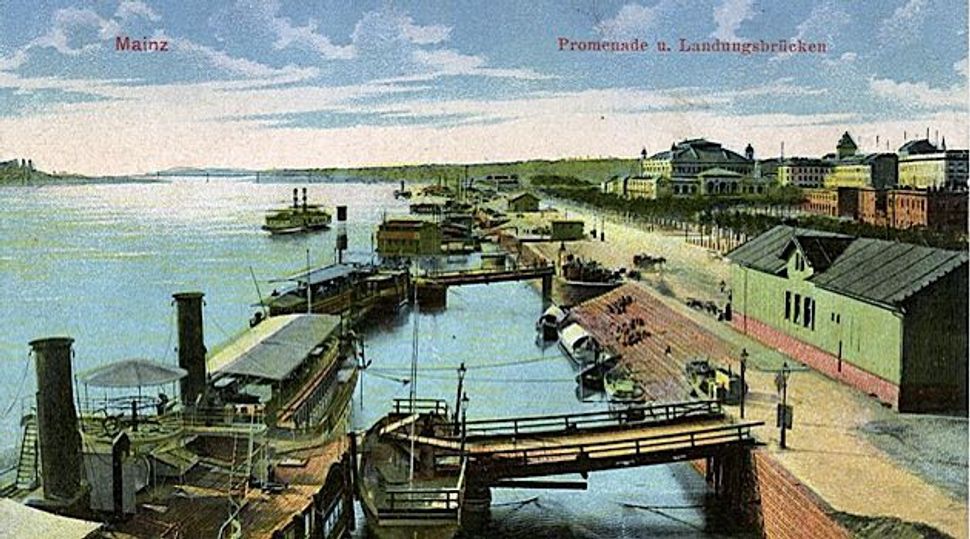 Mainz Event: Some argue that Yiddish started in the Rhine Valley. Image by wikimedia commons

In last week’s column dealing with two recent articles about the origins of Eastern European Yiddish, I dwelled more on the first — Cherie Woodworth’s account of the “standard theory” most systematically worked out by the great Yiddish linguist Max Weinreich (1894–1969) and of some of its problematic aspects that have led to the adoption of alternate hypotheses. This week I turn to the second article, Batya Ungar-Sargon’s, which deals with two of these hypotheses while profiling a prominent representative of each, plus a third leading Yiddish linguist who defends Weinreich’s position.

Ungar-Sargon writes about these three figures entertainingly — too much so in the opinion of one of them, Dovid Katz, who has just posted, in Yiddish, an Internet protest against her article’s sensationalization, as he sees it, of a serious scholarly dispute. Yet Katz, the Brooklyn-born son of a Yiddish poet who now heads the Yiddish department founded by him at the University of Vilna, is, if anything, more flamboyant than Ungar-Sargon makes him out to be. (I myself met him once, some 20 years ago, when he and I held, in the offices of the Forward, a debate about the historical “language war” between Hebrew and Yiddish that was published in the pages of this paper.) A man of many accomplishments whose long hair and beard give him the look of a 19th-century European revolutionary, he has a combative personality, a solid training in historical linguistics, a prodigious knowledge (and love) of Yiddish and its history and a sharply honed analytical mind.

Katz has challenged Weinreich (whom he always refers to with great respect) on two main issues. The first is the view that Eastern European Yiddish originated in southwestern Germany, in or near the Rhine Valley, where towns like Mainz, Worms and Speyer, first populated by Jews coming from eastern France, were important centers of Jewish commerce and learning by the late 10th and 11th centuries. Building on the work of Robert King, a professor of linguistics at the University of Texas, Katz argued that the Yiddish of Eastern Europe could not possibly have developed from Jewish speech in the Rhineland; that it must have initially crystallized in Bavaria, in southeastern Germany, and that the most likely place for this to have happened was in the vicinity of Regensburg, a trading hub on the Danube whose Jewish community, only slightly younger than the Rhineland’s, had become the home of illustrious rabbis by the end of the 12th century.

The copious linguistic evidence cited by King and Katz on behalf of this hypothesis testifies to the far greater affinities of Eastern European Yiddish with medieval Bavarian and Austrian dialects than with those spoken in the Rhineland. I gave as an example of this last week the Yiddish diminutive “l” ending, which is Bavarian but not Rhenish. Another of the many cases that could be cited is the German tense system, in which, in Bavarian as in Yiddish, the preterite, or simple past (for example, ich sah, “I saw”; ich schrieb, “I wrote”), disappeared in the Middle Ages and was replaced by the present perfect (ich habe gesehen, Yiddish ikh hob gezen, “I have seen”; ich habe geschrieben, Yiddish ikh hob geshribn, “I have written”), which came to function as a simple past, too. This did not happen in western Germany.

Katz’s second challenge to Weinreich was more original. First put forward in his 1982 doctoral thesis, “Explorations in the History of the Semitic Component of Yiddish,” it put forth what he called a “continual transmission theory” of Yiddish as opposed to Weinreich’s “text theory” — that is, the proposition that Yiddish’s very large Hebrew and Aramaic vocabulary (far larger than that of any other Jewish language) is due not to the gradual effect of rabbinical scholarship on a German substratum but to Yiddish’s earliest speakers being Semitic-speaking Jews migrating directly to the Regensburg area from Babylonia and Palestine rather than from France, Italy or other parts of Germany. Katz sought to prove this in a number of ways, among them the argument that Hebrew and Aramaic’s guttural “ch” sound, which had vanished from the speech of French and Italian Jews whose languages lacked it, would not have reappeared in Eastern European Yiddish solely because of the influence of German (which does have it), and must have been brought from elsewhere by Jews whose Hebrew pronunciation had retained it all along.

In recent years, Katz has de-emphasized his “continual transmission theory” (his 2004 history of Yiddish, “Words on Fire,” fails to mention it), perhaps because Middle Eastern Jews settling in Regensburg in the 11th or 12th centuries would have spoken Arabic, not Aramaic or Hebrew. Yet while the issues it raises are intriguing, it is hardly a necessary component of the Regensburg hypothesis. The contentions that Eastern European Yiddish originated along the Danube rather than along the Rhine, that it was from the outset a different language from Western European Yiddish; that it did not move slowly across Germany, from west to east, before reaching Slavic-speaking Poland, and that it absorbed its initial Slavic vocabulary from nearby Czech-speaking Bohemia deserve to stand on their own merits.

Next week I’ll get to the other two main protagonists of Ungar-Sargon’s article: Paul Wexler and Alexis Manaster Ramer.