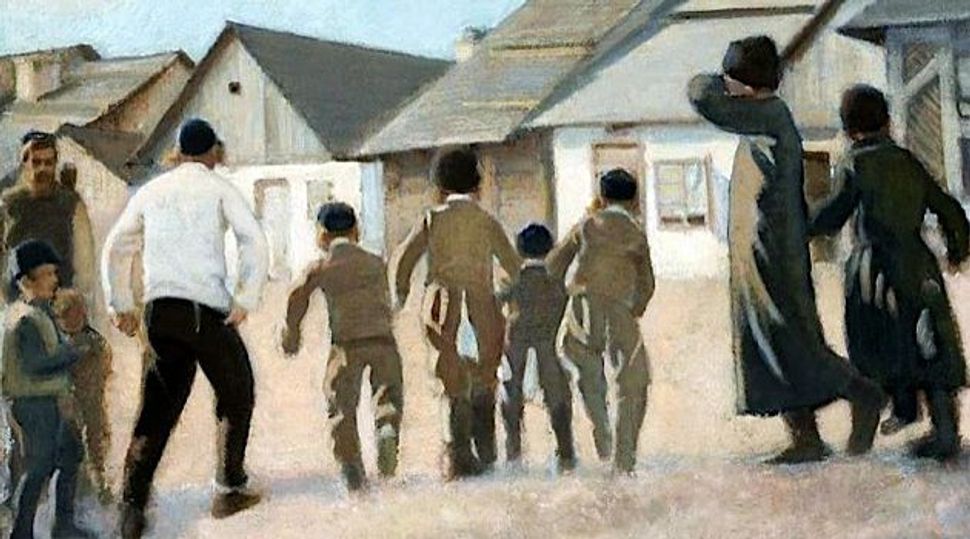 Yingl or Jungchen? Jewish boys going to school in Poland, where Eastern Yiddish was spoken, as depicted by artist Stanisław Dębicki in 1919. Image by Wikimedia Commons

Two recently posted articles in the Jewish Internet magazine Tablet provide an excellent introduction to anyone interested in the fascinating and problem-fraught field of Yiddish historical linguistics. One, by Cherie Woodworth, a scholar of Eastern European history who died last year, at the sadly young age of 46, first appeared in the journal Kritika in 2010. The other is by Tablet staff writer Batya Ungar-Sargon. The two are complementary and should be read together.

The questions of where and when Yiddish originated, who were its first speakers and how it spread were long thought by most Jewish historians and Yiddish linguists to be open-and-shut. The standard view was most forcefully presented by the great Yiddish linguist Max Weinreich (1894-1969), who developed it exhaustively in his four-volume “Geshikhte fun der Yidisher Shprakh” (“History of the Yiddish Language”).

Briefly summarized, it held that Yiddish first emerged as a distinct language around the year 1,000, when Jews migrating from northern and eastern France settled in the Rhineland of western Germany. These Jews (whose ancestors had come, via southern France, from Spain and Italy) spoke a French that had many Hebrew and Aramaic words culled from Jewish texts and traditions. And when, adjusting to their new environment, they switched to speaking German, they retained these lexical items, in addition to a smattering of words and names deriving from French, Spanish and Italian.

This new Judeo-German, the standard view goes, kept accruing more Hebrew and Aramaic vocabulary as Jewish learning continued to influence it; developed certain grammatical and syntactical idiosyncrasies as a result of the self-contained nature of Jewish life, and split into two main dialects: the “Western Yiddish” of Germany, Holland and Switzerland, and the “Eastern Yiddish” of Jews who pushed into the Slavic-speaking areas of Poland, Belarus and Ukraine. Now incorporating many Slavic words, too, Eastern Yiddish gradually became a distinct language. This is the language most of us know simply as “Yiddish,” Western Yiddish having almost entirely disappeared by the end of the 19th century as social barriers between Jews and gentiles fell in the countries in which it was spoken.

As accurately described by Woodworth, Weinreich’s view of Yiddish’s history is a gradualistic one, based on the assumption of slow and steady Jewish migration, over a period of many hundreds of years, from the south of Europe to its north, and from west to east. In part because it seems so natural an explanation, and in part because of Weinreich’s enormous authority, it went unchallenged during his lifetime.

When they finally came, however, the challenges were serious ones. Basically, they can be broken down into three categories: linguistic, demographic and genetic. Linguistically, an analysis of German dialects shows that a number of salient features in Yiddish have little in common with the speech of the Rhineland and much more with the German of other regions, such as Bavaria and Austria. To take a good example cited by neither Woodworth nor Ungar-Sargon, the ubiquitous Yiddish diminutive “l” -ending in words like meydl, a girl (from moyd, maid or young woman); yingl, a boy (from yung, a youth), and bisl, a little bit (from bis, a bite), characterizes Bavarian-Austrian dialects but not those of western Germany, where we find Mädchen, Jungchen and bisschen. It is hard to square things like this with the standard, Weinreichian view.

The demographic challenge is equally weighty. In the first place, we now know that in the year 1,000 or thereabouts, there were already Slavic-speaking Jewish communities in Eastern Europe that did not, apparently, come from Germany; why should they have been “Yiddishized” when German Jews began arriving among them? And second, if one wishes to argue that Yiddishization took place because Jewish migrants from Germany numerically swamped these Slavic speakers, studies indicate that the Jewish population of Germany in the 11th and 12th centuries was probably no more than 50,000, most of which would have remained where it was. The Jewish population of Eastern Europe in 1900, on the other hand, was close to 10 million. Allowing even for the relatively large families that Jews may have had, there seems no way to account for this on the basis of an eastward migration of German Jews, plus high birth rates and low infant mortality rates, alone.

Finally, and most recently, there are the DNA findings. Although difficult to interpret, they appear to indicate that a number of Eastern European Jews are genetically closer to populations in Central Asia, the Caucasus and Iran than to the Jews of Western Europe. This has led to a revival of the “Khazar theory,” the belief that part or much of Eastern European Jewry originally came not from points west, but rather from the Turkic tribes that inhabited the shadowy kingdom of Khazaria, the medieval state between the Black and the Caspian seas whose rulers, along with some of their subjects, were said to have converted to Judaism. When Khazaria was destroyed by its enemies in the 10th century, the theory goes, many of its Jews fled westward, multiplying by many times the numbers of Jews in Poland, western Russia and the Baltic states.

And yet, why, if this happened, is there absolutely no historical evidence of it? And why should a Turkic-speaking Jewish majority have become Yiddishized any more than a Slavic-speaking one?

Questions for Philologos can be sent to philologos @forward.com