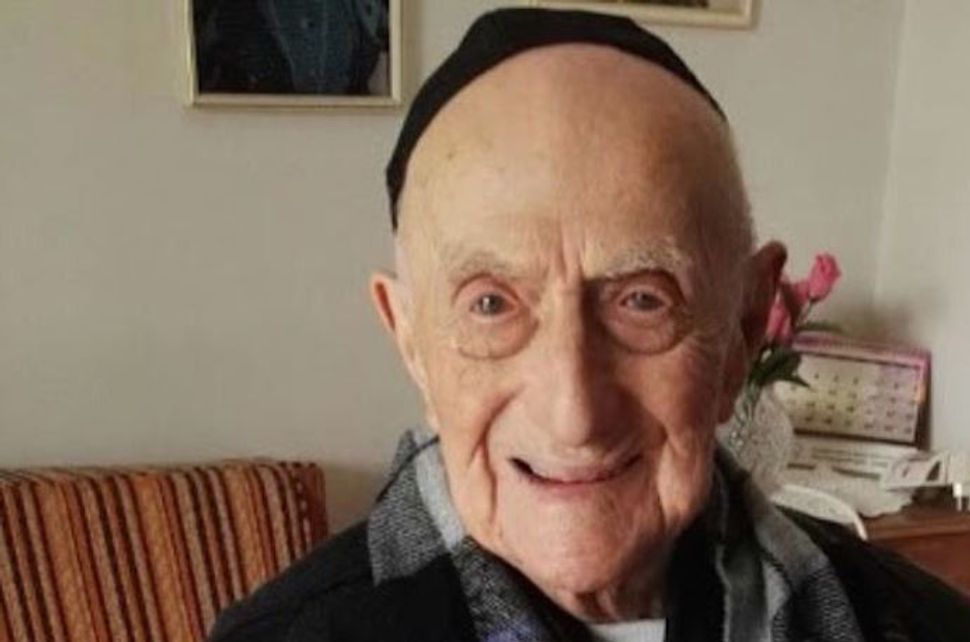 One day shortly after the outbreak of World War I, when Yisrael Kristal was a child, word spread throughout his hometown of Zarnow, about fifty miles from Lodz, that Emperor Franz Joseph was visiting a nearby town. The boy, along with a group of Jews from his shtetl, decided to walk the 22 miles to the town to see him. After the long journey, the boy looked at the Emperor’s automobile and, perplexed by what he saw, called out “but where are the horses?” Today, more than a century later, after surviving both World Wars and Auschwitz, Yisrael Kristal lives in Haifa, where the Guinness Book of World Records recently presented him with a certificate confirming that he is the oldest man in the world.

Yisrael Kristal was born 112 years ago on September 15th, 1903 in the tiny village of Maleniec, near Zarnow, in what was then the Russian Empire. Besides cars, his hometown lacked electricity, let alone telephones. It would often take a year for Zarnow’s Jews to receive an answer to the letters they sent relatives in America.

Word spreads much more quickly today. Shortly after I wrote a notice in the Yiddish Forward in January that the Guinness Book of World Records and the Gerontology Research Group were looking for documentation to confirm Mr. Kristal’s age, I learned that the supercentenarian himself had read my report. I found out about my oldest reader when Oren Kristal, one of Yisrael’s nine grandchildren, sent me a Facebook message explaining that a copy of the paper had reached his grandfather in Haifa. Oren wrote me again a few weeks later to let me know that Mr. Kristal had been officially certified as the oldest man in the world whose age can be verified. I arranged to speak with Oren’s father Haim about Yisrael Kristal’s extraordinary life.

When interviewing someone about their 112-year-old father, it’s nearly impossible to avoid the somewhat banal but obvious first question: how and why has your father lived so long? When I asked Haim, I received two answers: his own rationalist explanation and his father’s theological rejoinder to it. Haim, a physician who was raised religious but is no longer a believer, attributes his father’s longevity to a confluence of factors; first and foremost, his family appears to benefit from extraordinarily good genes. Yisrael’s grandmother was born in the 18th century, and many other relatives had lived into their 90s and beyond.

“His attitude also probably helped a lot,” Haim told me over the phone. “He’s always optimistic; he sees the glass as being half full. He eats slowly; he’s not a fresser. He’s also helped by the fact that he has good support from my sister and I and relationships with all of his grandchildren. So he knows that he belongs to a family and that helps.”

After giving his own opinion, Haim related his father’s explanation for his longevity. “My father has always been religious. He still puts on tefillin every morning. So for him it’s all God’s will.”

In a statement published on the Guinness Book of World Records’ website, Yisrael Kristal explained, “I don’t know the secret for long life. I believe that everything is determined from above and we shall never know the reasons why. There have been smarter, stronger and better looking men than me who are no longer alive. All that is left for us to do is to keep on working as hard as we can and rebuild what is lost.”

Rebuilding what has been lost is a good, concise summary of Yisrael Kristal’s life story. Long before the Holocaust, his childhood was marred by difficulties, and he was forced to reinvent himself and start all over again repeatedly. The third of seven sons, the young Yisrael started going to Cheder at the age of three, his father dutifully waking him up at 5AM so that he could finish his morning prayers in time for his lessons. Like most Jewish children of his generation in Zarnow, he never received a secular education. His mother died in 1910 and his father was drafted into the Russian army at the start of WWI. Due to the chaos of the war he would never have a Bar Mitzvah.

After his father was mobilized, Yisrael was sent to live with an uncle who exploited him, forcing him to work grueling hours on his farm. “He was basically a slave,” Haim said. “He worked and worked. He didn’t get to go to school.” Although Yisrael often went hungry, he would still give bread and other foodstuffs to Jewish soldiers who came by his uncle’s farm. One time a soldier asked Yisrael to say Kaddish for his relatives in case the soldier died on the battlefield.

At 17, Yisrael settled in Lodz, where he began working in a chocolate factory. He soon gained renown, first as an unusually industrious worker and then as a master confectioner. His success soon allowed him to open his own factory. In 1928, he married a local woman, Chaja Feige Frucht, and the happy couple soon had two sons.

In May 1940, Yisrael Kristal was confined to the Lodz ghetto along with 200,000 other Jews. He continued running his factory. German officers, as well as officials in the ghetto’s Judenrat, provided him with sugar and chocolate so that he could continue making sweets. “His profession probably helped him survive,” Haim Kristal told me, explaining that German officers would celebrate their birthdays and order sweets for their relatives in Germany. “If you’re making them chocolates and candies they’re not so angry with you.” Being a confectioner insured that Yisrael and his wife avoided being deported to Chelmo, where most of the ghetto’s inhabitants were gassed. His profession couldn’t, however, save his sons; both died during outbreaks of disease in the ghetto.

In August 1944, Yisrael and his wife Chaja Feige were sent to Auschwitz on the very last transport from the Lodz ghetto. Both survived the camp’s initial selection and Yisrael was able to stay in contact with his wife, who was confined to another section of the camp, via intermediaries. A few weeks after his arrival, however, he received word that his wife had been shot dead.

After three months in Auschwitz, Yisrael was sent to a series of slave-labor camps in Germany. When he was finally liberated by the Russian army in May 1945, he weighed a mere 81 pounds. Unable to walk, it took months of recuperation in a hospital until he could return home. Finding that Lodz’s infrastructure was relatively undisturbed by the war and that an influx of Jewish refugees from throughout Poland had settled there, he decided to stay. He soon opened a chocolate factory and met his second wife Batsheva, a fellow survivor, who had lost her husband and son.

The couple soon had their first child, their son Haim. Two years later, they settled in Israel where they would soon welcome their daughter Shula. Yisrael found work at a candy factory, starting his career all over again for the third time in two decades. He excelled at his work, helping his bosses modernize their production lines, and eventually he worked his way up to opening his own factory. He kept running his third factory until his retirement in 1970. Even in retirement, however, he found that he couldn’t fully leave his beloved profession behind. He continued making sweets at home and rented a stand at a local mall to sell them.

“My father likes to work,” Haim Kristal noted. “It was hard for him to give it up at first. But he wanted to study because he had never had the opportunity to get an education.” Yisrael spent much of his 70s taking classes at Haifa University where he studied literature, improved his German and learned English. Never a fan of television or wasting time, Yisrael spent his days reading books, putting on tefillin every morning and enjoying the company of his nine grandchildren and many great-grandchildren.

Shortly after Yisrael’s 110th birthday, his family wrote to the Guinness Book of World Records. Two years later, in January of this year, Guinness informed the family that Yasutaro Koide had died in Japan a few months shy of his 113th birthday, leaving Yisrael Kristal as the presumptive oldest man in the world. There was only one catch: the Gerontology Research Group, which confirms the ages of supercentenarians, required a document attesting to Yisrael’s identity that had been created before his 20th birthday. The earliest document Yisrael could produce was the wedding certificate from his first marriage, which he had been given at the age of 25. After several months, earlier documentation was located thanks to the organization Jewish Records Indexing in Poland, and on March 11th, the Guinness Book of World Records officially pronounced Yisrael Kristal the oldest man in the world. Upon hearing the news, Kristal remarked to his son in Yiddish “Oh, what joy has found me.” Then jokingly, he asked his son how much Guinness was going to pay him for every year he had lived.

Despite his jovial humor, Yisrael Kristal doesn’t understand why the world is making such a big deal about his longevity, considering it not a personal accomplishment but rather a sort of fluke, a divine accident which has less to do with him than with God’s mysterious ways. Rather than his age, he emphasizes that he takes pride in his personal accomplishments and in the lives of his many descendants.

When I asked his son whether his father had a wish or message for the world, Haim answered that his father wishes for world peace.

A Yiddish version of this story previously appeared in the *Forverts.*