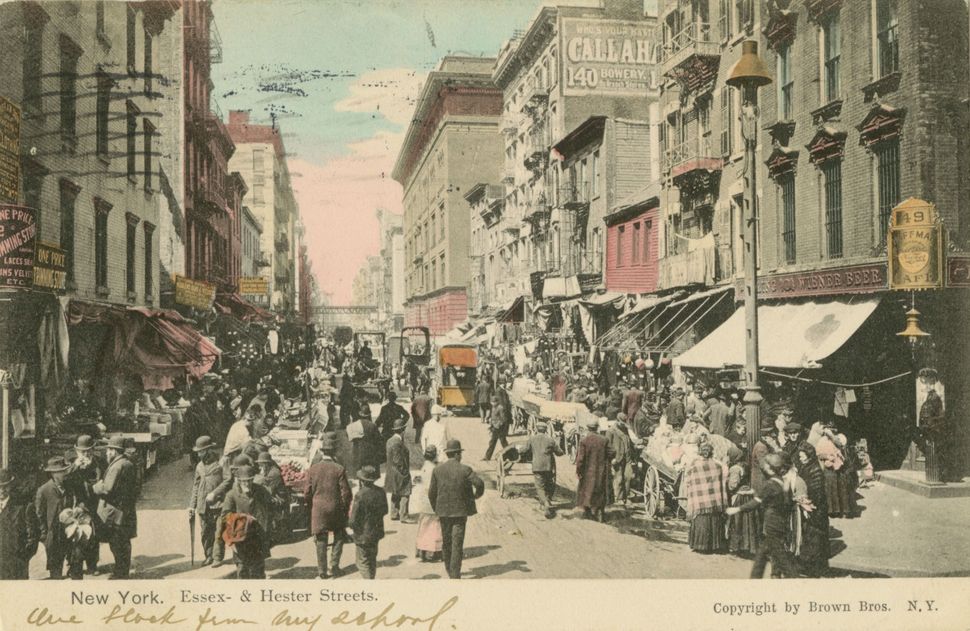 Image by courtesy of the Blavatnik Archive Foundation

The Museum at Eldridge Street, located inside a National Historic Landmark 19th century synagogue, has an interesting exhibition coming up next week – and it couldn’t come at a better time. The exhibition, which is being put on in conjuction with the Blavatnik Archive Foundation (“a non-profit foundation dedicated to the preservation and dissemination of primary resources that contribute to the study of 20th century Jewish and world history”) is titled “The Jewish Ghetto In Postcards: From Eastern Europe to Lower East Side.”

The exhibition will feature postcards from both New York and Europe – with some showing “rarely seen images of shtetls in Europe that were wiped out during the Holocaust.” While European shtetl life was abruptly eradicated by the events of the Holocaust (and, in the case of Poland, the period immediately after), life in the “Jewish Ghetto” of the lower east side was gradually phased out by assimilation. Either way, the exhibition will offer us a glimpse into a way of life that no longer exists.

The exhibition coincides with a rise in anti-immigration sentiment around the country and an increase in anti-immigrant comments at New York’s Tenement Museum. As Zach Aarons, a member of the board of trustees for the Tenement Museum, wrote in The Forward earlier this month, “we must recognize the threads that bind countless American immigration stories, some centuries old and some just beginning. Nearly every American has an immigrant past.” As we debate immigration policy, tolerance for Muslim Americans, and the “whiteness” of Jews, that is, as we debate just who belongs in mainstream America, it is important to remember that in the not too distant past, we were immigrants – the postcard exhibition will hopefully serve as an interesting, sobering reminder.

The Exhibition opens on December 15th and runs through March 8th, 2017 at the Museum at Eldridge Street on 12 Edlridge Street, New York