The Plight of WWII Jewish Refugees in Shanghai, and More Forward Looking Back 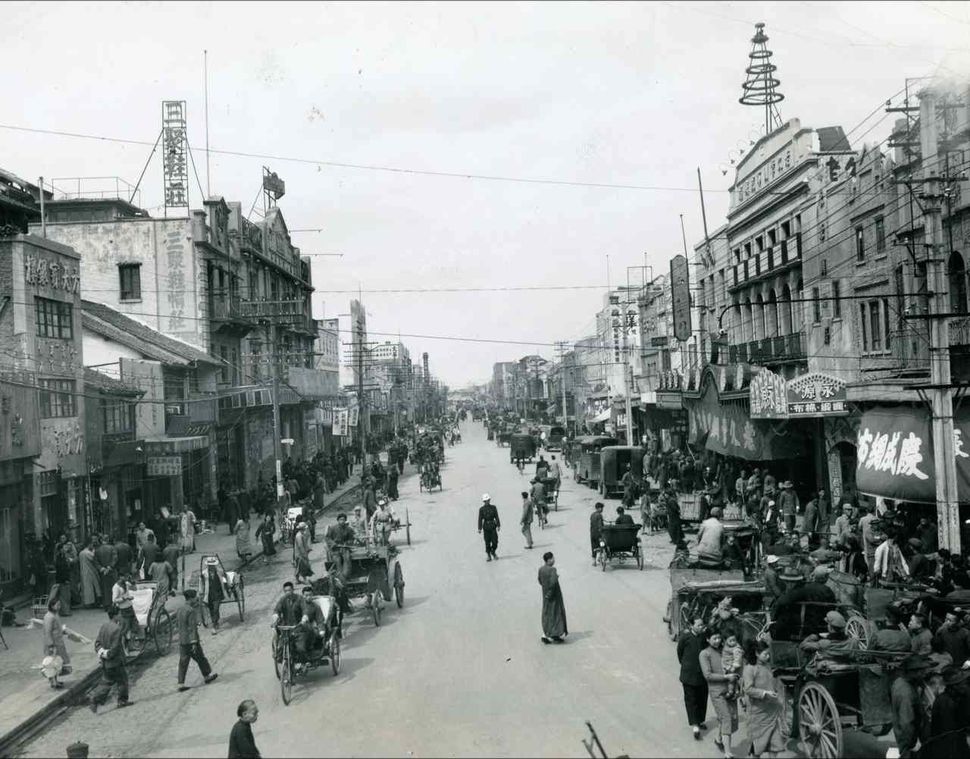 A street scene from Shanghai in the 1940s. Image by Forward Association

There was joy in the offices of the Hachnosas Orchim (Welcoming of Guests) organization on East Broadway in New York City this week. A group of about 200 immigrants from northeastern Poland and Lithuania had arrived, and their relatives were helping them enjoy the bounty of this land. Many of the immigrants were once wealthy people; however, they had been forced to leave because the conditions of the current war have caused business in the area to grind to a halt. One of them, for example, is Nokhem Oblonik, who owned the Hotel Grand, one of Vilna’s biggest. Wealthy nobles and celebrities were known to stay at his hotel, including famous Yiddish writers like Sholem Aleichem and Peretz Hirschbein. Oblonik was a considered a wealthy Jew in Vilna, but once the war began, his business collapsed and he had no means to make a living. Other formerly well-off Jews like him were forced to dig ditches or haul garbage for a few pennies a day just to buy bread. Others in this group of immigrants had similar tales to tell.

With the advent of war between the United States and Japan, there is great fear as to the condition of the more than 20,000 Jewish refugees currently stranded in Japanese-occupied Shanghai and in other, similarly occupied territories controlled by the Japanese government. Nazi elements in Japan recently initiated an anti-Jewish campaign. In connection to this issue, fear has gripped the Jewish refugee population in Harbin. According to information received from Yitskhok Shvartsbart, one of the Jewish members of the Polish Government-in-Exile, there are no Polish Jews in Japan but there are many in Shanghai. It is hoped that the Polish government will be able to help these Jews in some way. Meanwhile, the fate of German Jewish refugees in Hongku is still not clear.

America has warned Syria that it should cease threatening neighboring states. The warning was issued after the Soviet-backed Syrian president, Nureddin al-Atassi, had called for war with both Jordan and Israel. The American government said it would be keeping its eyes open in regard to the situation in the Middle East, particularly because the Syrian army took over the European-built and -owned pipeline that delivers oil to the Mediterranean Sea from Iraq. The seizure of the oil pipeline is considered the most brazen attack since Gamal Abdel Nasser seized the Suez Canal in 1956. In an unrelated matter, the Arab League is demanding that King Hussein of Jordan permit soldiers from Ahmed Shukeri’s Palestine Liberation Organization to man and monitor the border between Jordan and Israel.

The Plight of WWII Jewish Refugees in Shanghai, and More Forward Looking Back