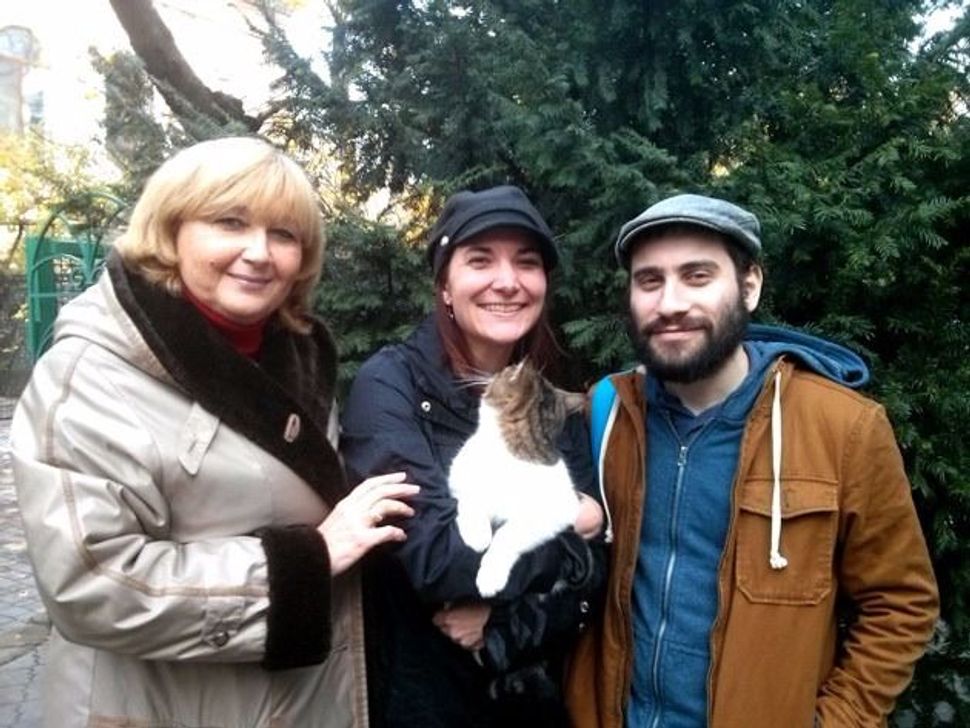 Once, Odessa was very much a Jewish city.

Before World War II, a third of those living in the Ukrainian port city were Jewish. According to the latest census, the Jewish population today is roughly 1%.

And yet, during a recent trip to Ukraine, I was surprised to find that nearly everyone I met in Odessa had Jewish roots.

I had gone to Ukraine to explore the city’s rich Jewish heritage and improve my Russian language skills through a 2-week program offered by the Odessa Language Study Center. My journey began at the second annual Polyglot Conference in Thessaloniki, Greece, a similarly vibrant former center of Jewish civilization in Europe. Accompanied by my polyglot partner-in-crime, Yankl Peretz Blum, we embarked on an arduously long bus ride from Greece to Moldova and Odessa.

Eager to provide opportunities for us to practice our Russian, the Odessa Language Study Center had set us up with a local host family. Oksana, our hostess, was a chatty divorced housewife whose entire wardrobe seemed to consist of a colorful collection of bathrobes. She lived with her daughter, who worked as a nurse, and a cat who – we later joked – had a face of true yevreyskaya toska, a Russian expression for Jewish melancholy. While we chatted with Oksana over tea, we discovered her own connection to Yiddishkeit.

“My grandmother was Jewish,” Oksana remarked, slicing herself a piece of pork fat.

“My mother’s mother,” she answered.

“Well, then, according to Jewish law, you’re Jewish!” I exclaimed.

Swallowing her food, she replied with unmistakable Yiddish irony: “And you think I care about Jewish law?”

We soon realized that Oksana’s story was far from unique in Odessa. Our Russian language teacher, “Tanya” (she requested we not use her real name), also mentioned that her mother was Jewish. During WWII, Tanya’s grandparents hid her mother, “Masha” – also a pseudonym – with a local Christian family, so that she would be safe while the majority of Odessa’s Jews were being deported and murdered.

Masha never saw her parents again, and by the time her surviving sister came to reclaim her after the war, she refused to leave her adopted family. “This is my home now,” Masha explained.

With all her ties to Jews severed by the war, Masha eventually married a man of Polish and Ukrainian descent.

Masha’s mother-in-law was a fiercely devout Orthodox Christian and, despite the political risk to her family at the time, baptized her two grandchildren, including Tanya, in the Church when they were very young. Masha never said a word to her daughter about her own Jewish family, though Tanya found out years later that her maiden name was Shechter.

Although Tanya’s baptism didn’t strengthen her faith as a Christian, she attributes her belief in God to both of her grandmothers’ devotion: one who saved her daughter’s life despite losing her own, and one who tried to save her granddaughter’s soul. Yet Tanya considers herself neither Jewish nor Christian. “The most important thing,” she stated, almost quoting Hillel’s maxim, “is to be a good person and do no harm to others.”

Tanya didn’t appear eager to embrace her Jewish identity, but she told us that she did make an effort to learn more about her roots.

A few years ago, she visited the Jewish Museum of Odessa in order to see if she could dig up some details about her family’s past. But the caretaker of the museum, who was Jewish, shrugged his shoulders and said that the name, Shechter, is so common, he couldn’t give her any more information. He did, however, say something she never forgot: “So your mother was Jewish… congratulations! That means you’re Jewish, too!”

Tanya didn’t see the employee’s enthusiasm in a positive light, though. “Why did that man congratulate me?” Tanya asked with a dramatic pause and then answered her own question: “Because he obviously thinks Jews are better than Gentiles.”

“This isn’t uncommon,” she added. “When a Russian doesn’t get accepted into the university, [Jews] will say that it’s because he wasn’t smart enough, but when a Jew isn’t admitted, suddenly it’s anti-Semitism!”

Struck by Tanya’s harsh assessment of her own people, Yankl and I didn’t know how to respond. And yet, her attitude was hardly surprising. After the systematic destruction of the Jews and their culture in Ukraine – first, by the Nazis, and then by the Communists – many Jews are understandably hesitant to identify themselves as such.

Still, we did find signs of a slow renaissance of Jewish life in Odessa during our two week stay.

The city today has several kosher restaurants and active synagogues. Additionally, thousands of Chasidic tourists come there every year during the Days of Awe, making a pilgrimage to the gravesite of the revered Hasidic Rebbe Nachman of Broslov.

One Shabbos, while visiting the largest synagogue in town – located on the appropriately named Yevreyskaya ulitsa, or Jewish Street – we saw hundreds of locals show up for the Friday night and Saturday morning prayer services, an event organized by The Shabbat Project. (The Shabbat Project, started in South Africa in 2013, stages events worldwide to connect Jews through the practice of Shabbat.)

A crowd this large for a Jewish prayer service in Odessa might seem surprising; no doubt it had something to do with the fact that it included free hot meals for all in attendance. Many guests even came prepared with plastic bags, which they used to bring the leftovers home.

Although some people may have come to The Shabbat Project event more for the food than for spiritual fulfillment (or as we say in Yiddish: “er meynt nisht di hagode, nor di kneydlekh,” “he’s less focused on the haggadah than on the matzah balls”), the fact that a 200-year-old synagogue was brimming with so much activity could bode well for the future of Jewish life in Odessa.

One young woman, a waitress at the kosher restaurant Rozmarin, even said that the high number of guests there wasn’t surprising. “I usually daven at Chabad,” she said, “and we get even more people than this.”

As Yankl and I walked back to Oksana’s house, I found my glance falling on the faces of the men and women passing me by, as I tried to discern which of them looked Jewish and which didn’t. One man with a child in tow caught my gaze and smiled warmly.

“Good Shabbos,” he said and disappeared.