A Yiddish Theater Boom, and More of The Forward Looking Back 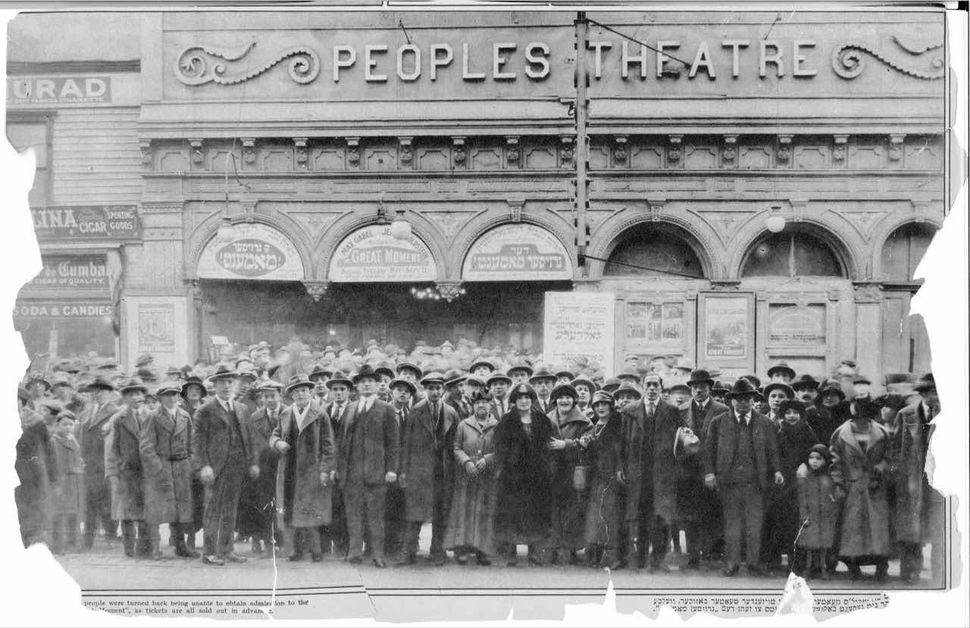 A mass of theatregoers outside the Peoples Theatre, waiting for tickets to the Yiddish play “The Great Moment,” which ran 1927-28. Many were turned away, the tickets having sold out well in advance. Image by Forward Association

There are currently 18 Yiddish theaters in America, and all of them are doing a bang-up business. This is in addition to the numerous Yiddish theater companies that are traveling around the country, performing in many different cities. There are five theaters in New York: Kessler’s, Shevski’s, People’s, Gabel’s and the Grand Theater. Because Harlem is also in New York, we can add a sixth: Lenox, which is managed by Goldberg and Jacobs. In Brooklyn we have the Lyric and the Liberty. There is also the Metropolitan, in Newark, New Jersey; two in Philadelphia; one in Boston; one in Detroit; one in Toronto; two in Cleveland, and two in Chicago. It is a mystery why Yiddish theater is so popular. Perhaps the current war has put us in a nervous and philosophical state. We want to forget about the war, so we go to the theater.

In Nazi-occupied Poland, hundreds of Jews are dying of hunger, cold and typhus. According to reports out of Geneva, freezing temperatures and starvation are causing older Jews and children to simply fall and die in the streets. The typhus epidemic in the Warsaw ghetto is so severe that 300 victims are dying per day, and treatment for the disease is unavailable. According to official German statistics, the death rate in Lemberg is also very high. In November, 1,387 people died, among them 405 Jews. The hospitals there and in nearby Przemysl are packed full of the sick and dying. Typhus is also spreading quickly in Lithuania, where a number of towns have been placed under quarantine by the Nazis. It is also being reported that the typhus epidemic that has spread throughout Poland and the Baltic states has spread into Germany as well.

Renewing fears of conflict with Israel, the Jordanian government resigned today. The government of Premier Wasfi Tel, which had supported King Hussein against the more extreme elements inside and outside the country and hopes to unseat the king, fell without a specific reason being provided. Radio Amman simply announced that the king had asked Tel to form a new government. In response, Israeli Prime Minister Levi Eshkol said that the country’s military forces had been strengthened in case of attack. Complicating matters, the Palestine Liberation Organization leader, Ahmed Shukairy, announced that he had a new plan to free Palestine and that his army was ready to march into Jordan immediately.

A Yiddish Theater Boom, and More of The Forward Looking Back