The Secret Jewish History of the Doomsday Clock 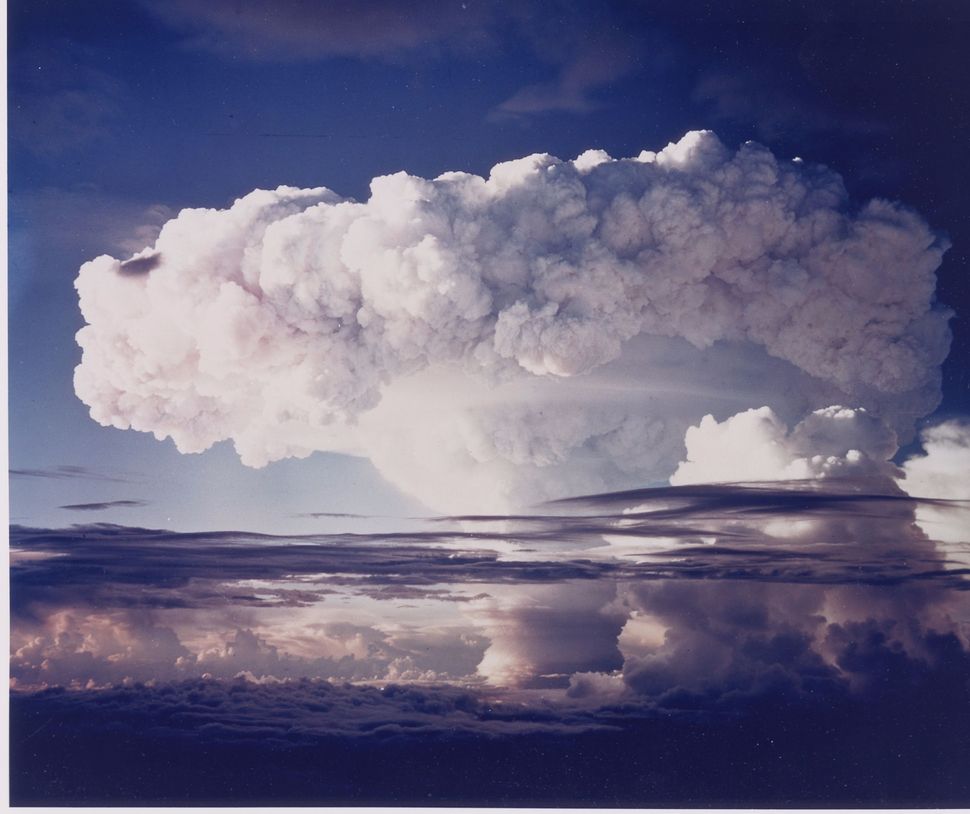 In 2017, contention for the title of the day’s worst piece of news is tight. Is it the portent of a coming crackdown on voting rights? The felony charges for 6 reporters covering protests of President Donald Trump’s inauguration? (Ok, that was earlier this week, but still.) The doubling of membership fees at exclusive clubs bearing Trump’s name, an action that all but screams “conflict of interest?”

Sweet, but no. Today’s worst news is likely that the Doomsday Clock — the Bulletin of Atomic Scientists’ measurement of how close humanity is to the possibility of a global catastrophe due to the threats of nuclear weapons and climate change — has been moved forward by 30 seconds. We are now a mere 2.5 minutes from midnight, which — you guessed it — is when doomsday arrives.

While you may find yourself sobbing anxiously over the fact that a magazine founded by scientists who helped invent the atomic bomb has listed us as closer to worldwide disaster than we’ve been since 1953, perk up: as promised, at least that magazine has a Jewish backstory.

Here are the facts: the Bulletin was co-founded by Eugene Rabinowitch, a Russian-born Jewish botanist and biophysicist, and Hyman Goldsmith, a Jewish, Austrian-born physicist. Both had worked on the Manhattan Project, the effort that led to the invention of the first nuclear bomb.

Shortly after the end of World War II, a group of scientists involved in that project broke away to form the Atomic Scientists of Chicago. That group, including Rabinowitch and Goldsmith, printed the Bulletin, the first issue of which, printed on December 10, 1945, articulated the group’s mission.

First, they wrote, they aimed “To explore, clarify and formulate the opinion and responsibilities of scientists in regard to the problem brought about by the release of nuclear energy.” Second, they strove “To educate the public to a full understanding of the scientific, technological and social problems arising from the release of nuclear energy.”

Rabinowitch, the magazine’s first editor-in-chief, helmed the publication for over 2 decades.

Over the years, a host of Jewish scientific notables have appeared in the Bulletin’s pages. In a December, 1948 issue Albert Einstein wrote a letter lauding the publication for establishing itself as “the best and most complete source of authoritative information on the social aspects of atomic energy,” and put forth a plea for donations to help it continue. And in October, 1967 the magazine’s cover was dedicated to the memory of the recently deceased J. Robert Oppenheimer, a theoretical physicist known as one of the fathers of the atomic bomb and the first chairman of the Bulletin’s Board of Sponsors.

Today, the contemporary chairman of the Bulletin’s board of sponsors, Jewish theoretical physicist and cosmologist Lawrence M. Krauss explained the group’s decision in a New York Times Op-Ed co-written with David Titley (Titley, a meteorologist, is the former chairman of the Navy’s Task Force on Climate Change).

“In 2016, the global security landscape darkened as the international community failed to come to grips with humanity’s most pressing threats: nuclear weapons and climate change,” the duo wrote. “Making matters worse, the United States now has a president who has promised to impede progress on both of those fronts.”

Krauss and Titley commented that this is the first time in the publication’s history that the clock has been moved forward primarily because of “the statements of a single person.” They cited escalations in nuclear development, the potential dismantling of the Iran deal, uncertain progress on climate change, and a tense relationship between the United States as Russia as factors that also contributed to their decision.

In the year this writer was born, the Bulletin had most recently determined the clock to be 17 minutes from midnight. It looks as if the pre-conscious days really are the best ones.

The Secret Jewish History of the Doomsday Clock