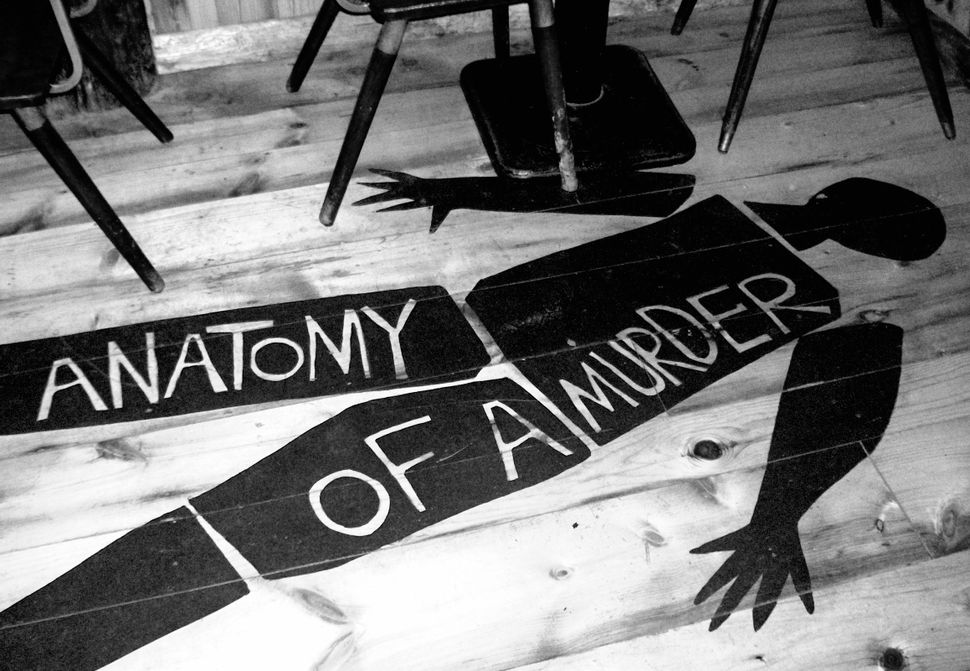 Graphic designer Saul Bass is one of those towering figures in American film whose name is far less well-known than his work. His work appears in the films of directors like Alfred Hitchcock, Otto Preminger, Martin Scorsese, and Stanley Kubrick. If you’ve seen “Catch Me If You Can” (2002), “Kiss Kiss Bang Bang” (2005), “Mad Men,” or just about any film or television show with a title sequence, then you’ve seen Bass’s influence.

Through his 40-year career, Bass was a pioneer of title sequences and film poster design. Before he got involved in the film industry, title sequences consisted of static text against a more or less static background, followed by credits, music, and then the film

In a word, they were boring. Once Bass got involved however, they began to look something like this:

Bass’s innovative idea (which seems commonplace now) was that the film began the moment the projector starter running. Where earlier filmmakers had used the title sequence merely as a means of introducing the title and credits of the film, information that audiences generally already knew, Bass used the title sequence to introduce the film’s themes and moods.

Born on this day in 1920 to Eastern European Jewish immigrant parents in the Bronx, Bass received his artistic education at Brooklyn College under György Kepes, a prominent art professor who first came to the United States from Hungary to teach with László Moholy-Nagy at the New Bauhaus School in Chicago.

Kepes’s philosophy of “visual language” is a good entry point into the work of Bass. In his seminal book “Language of Vision,” Kepes writes:

The visual language is capable of disseminating knowledge more effectively than almost any other vehicle of communication. With it, man can express and relay his experiences in object form. Visual communication is universal and international: it knows no limits of tongue, vocabulary, or grammar, and it can be perceived by the illiterate as well as by the literate. Visual language can convey facts and ideas in a wider and deeper range than almost any other means of communication. It can reinforce the static verbal concept with the sensory vitality of dynamic imagery.

Kepes’s mission statement, while it might go a little far, is clear: The visual is a deeper, more democratic, more accessible form of communication than the written word.

Bass clearly incorporated Kepes’s mission statement in his own work. In his two-minute title sequence for Preminger’s 1959 “Anatomy of a Murder,” for instance, Bass’s animation of a body deforming into its constituent parts and reforming again, captured the essence of the courtroom drama, that is, a lawyer piecing together constituent parts to assemble a case in which, quite literally, a body is at stake.

The sequence also gives us an example of one of Bass’s most frequently deployed, and arguably most famous motifs: An intense micro-focus upon an object. Here, each body part is seen apart from the whole; seen by themselves, they momentarily become abstract shapes. The constant disassembly and reassembly not only suggest the frustration of the film’s legal struggle, it also perfectly encapsulates Bass’s unparalleled resourcefulness. Aside from the text, there are only six elements to the image, but Bass’s sense of rhythm — the somewhat syncopated animation captures the essence of the film’s famous soundtrack as well — keeps the sequence visually engaging.

While Bass was not always so economical — the brilliant opening sequence for “Around The World In Eighty Days” (1956) for instance is lavish — he was, for my money, at his best when at his most sparse. Consider also the title sequence for Preminger’s 1965 “Bunny Lake Is Missing” which features nothing more than a hand tearing away at a black space, revealing black, gray, fading lines of text. It’s incredibly empty, but in the context of a thriller about a kidnapping, the sequence’s tearing, violent hands and claustrophobic opacity, suggestive of both psychological horror and mystery, become frightening in their own right.

But enough kvelling over Bass’s work. Instead, let’s simply say happy birthday on what would have been the man’s 97th year. He is sorely missed.