Why These Cutesy Putin Articles Must Stop 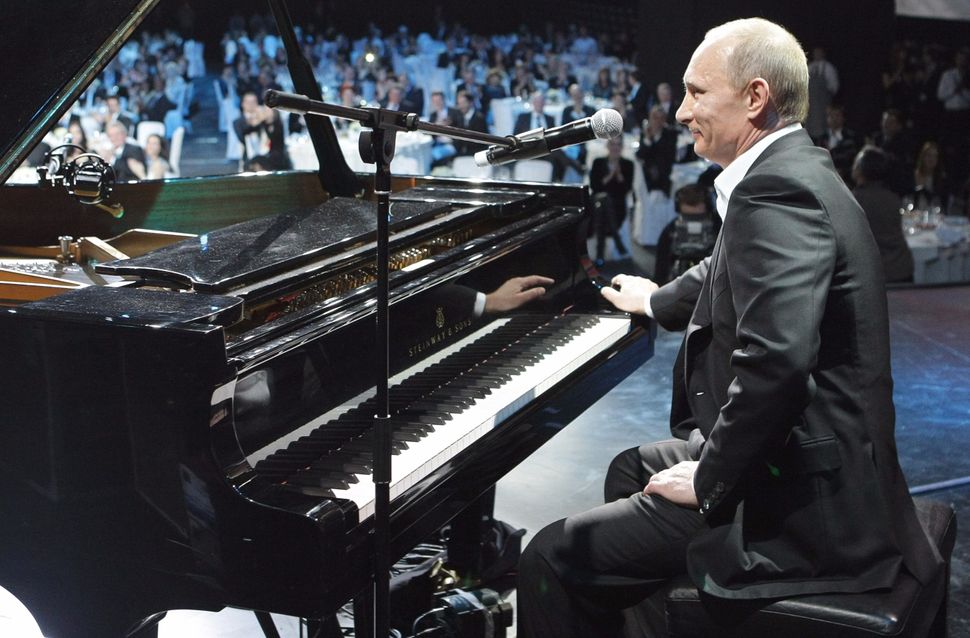 Footage of Vladimir Putin playing the piano prior to his meeting with Chinese President Xi Jinping has recently been making its way across the internet. He sits down, haltingly taps out a couple sentimental Russian tunes, smirks at the camera, and then we’re off. An article in the Huffington Post reads, “The Russian leader isn’t shy about displaying himself as a macho renaissance man, also participating in judo, ice hockey and horseback riding ― the latter sometimes shirtless” while an article from Time Magazine tells us that “This is not the first time the Russian leader has flaunted his musical skills. Putin performed Fats Domino’s “Blueberry Hill” at a charity concert in 2010, which was attended by actors Sharon Stone, Kevin Costner and Gérard Depardieu.”

Putin is indeed quite the Renaissance man. In between hobnobbing with Kevin Costner and Sharon Stone, he manages to cavort with perhaps more niche celebrity types like Bashar al Assad and Ramzon Kadyrov. Even though he spends time “participating in judo” and performing “Blueberry Hill,” he is still somehow able to find the time to commit war crimes in Chechnya and Syria, all while murdering journalists and dissenters both in Russia and abroad.

There is something wrong, indeed, something disgusting, unforgivable even, with abstracting a dictator from his crimes. With publishing the mildly cutesy takes about a childish piano performance, with mentioning Putin’s performance at a charity concert without also noting that he is a moral monster on par with his cohorts Assad and Kadyrov.

These short articles are unforgivable because they offer us a moment’s reprieve, a moment to snicker (one can already imagine the “US Magazine” “Dictators: They’re Just Like Us!” column), a moment to forget. Because unless we forget, there is no reprieve, and there is no snickering. Here is what we omit when we type 200 words on a piano performance by a dictator, when we gently mock his machismo. Here is what we must forget:

We must forget that at this moment Chechen forces under the control of Putin stooge Ramzon Kadyrov are arresting, torturing, and in some cases killing, gay men and arresting those who might come to their aid.

We must forget that the Syrian military, with both material and diplomatic support from the Putin regime, has murdered hundreds of thousands of civilians in bombing and gas attacks.

We must forget the images of naked, mangled, emaciated corpses strewn across the floor of the Syrian torture compounds – their gray anonymity evoking, yes, Hitler’s concentration camps.

We must forget that Assad has learned more than just brutality from the regimes of the past, and that, as has just been reported, the Assad regime has started to use a crematorium at the Sednaya prison facility in order to destroy the evidence of its crimes and to keep pace with the facility’s (at least) 50 executions a day.

We must forget that Putin rose to power after committing war crimes in Chechnya during the Second Chechen War in which up to 50,000 civilians were murdered. We must forget that this war was started on the pretext of the 1999 Russian Apartment Bombings in which over 1,200 people were either killed or wounded – bombings that were, likely, perpetrated on the orders of Putin himself.

We must forget that Putin has invaded both Ukraine and Georgia, supported various violent insurgencies in both countries, and continues to threaten the sovereignty and safety of the Baltic states.

We must forget that the Putin regime has been responsible for the murder of journalists and dissenters such as Alexander Litvinenko, Boris Nemtsov, and Anastasia Baburova.

We must forget that the infamous Soviet “Gulags,” prisons in which prisoners, political or otherwise, were tortured and kept in degrading and intolerable conditions, continue to exist in Putin’s post-Soviet Russia as well.

Now, there is nothing wrong with mocking murderous dictators. Humor can be a weapon, and it can be defense against despair. But if we choose to laugh, it is of the utmost importance that we remember exactly who it is we are laughing at.

Why These Cutesy Putin Articles Must Stop