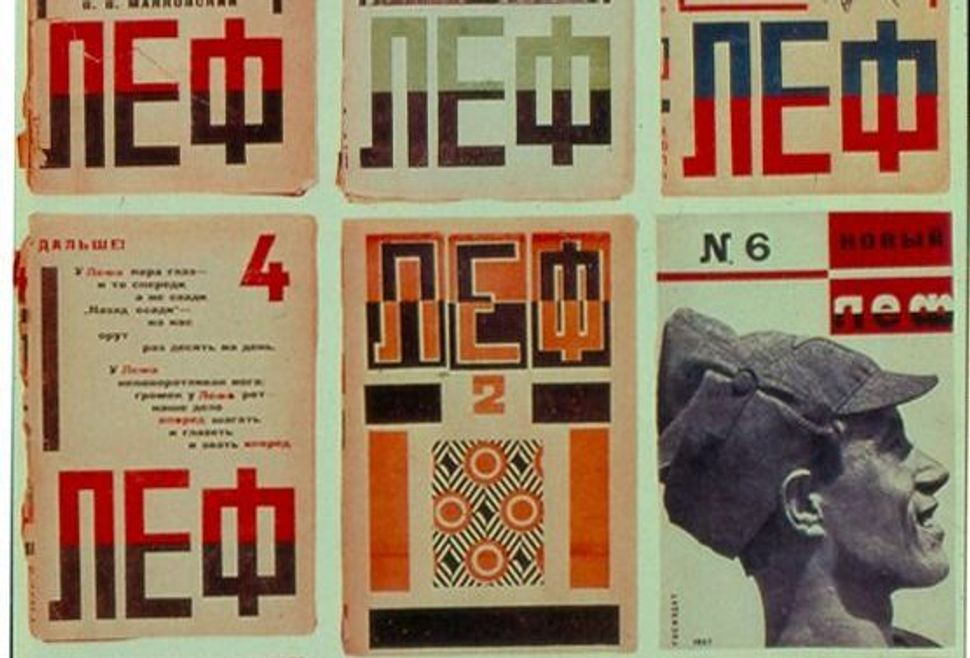 There’s a line in one of Vladimir Mayakovsky’s poem-play “Vladimir Myakovsky” (the young poet was nothing if not confident) that strikes me as among the most ferocious lines ever put to paper:

“We will eat this century like meat, we’ll eat our fill,

The oeuvre of Mayakovsky, one of the great early Soviet artists, is filled with similar lines, with violence (both irreverent and malicious), grandiose declarations, spite – but this line, more than any other seems to encapsulate something essential about the poet and his milieu.

It’s about appetite, I think – the essential thing – about the fierce insatiability of revolution and the artist in a time of change – one gets the sense that after he’s done with the century, done licking the plate, he’ll eat the plate too and his mouth will bleed from the shards and he’ll laugh and drink the blood all the same.

He wasn’t alone in this – he had his comrades, and, this being the time of and around the Russian revolution, they were hungry too. He had Lilya Brik, his lover (for a time), who wrote, acted, and generally embraced the role of “muse” for the Soviet avant-garde (“muse” can be a sexist category – women defined only in relation to “great men” – but Brik actively cultivated this role, hers was not a passive “museship.” She was a patron, the center of this world. This was her craft, her art).

He had Osip Brik – Lilya’s husband and the third in the strange ménage a trois between himself, Mayakovsky, and Lilya (Osip was fully aware of Mayakosvky and Lilya’s affair and the poet lived with the married couple on and off for a number of years). Though Osip began his career as a lawyer, he eventually abandoned the law to become a writer – most notable for his publishing activities (championing the young Mayakovsky and Alexander Rodchenko, among others) and his critical writings.

He had Alexander Rodchenko – the most famous of the bunch – whose photography would influence artists as disparate as Barbara Kruger and Kraftwerk. He had Dziga Vertov – one of the first to realize (both in the theoretical sense and in the sense of actualization) the radical potential of the moving image.

These artists all had an incredible individual output – pushing aesthetic boundaries, rejecting (sometimes fervently, sometimes half-heartedly) the categories and practices of the past, supporting (again, sometimes fervently, sometimes half-heartedly) the Bolshevik revolution and the nascent Soviet state – but their combined efforts also produced one of history’s greatest avant-garde journals, LEF. LEF, the journal of the “Left Front of the Arts,” was started in 1923 by Mayakovsky and Osip Brik and ran until 1929 (though there was a two year gap in publication between 1925 and 1927, after which the journal reemerged as Novy LEF [“New LEF”]).

I recently came across an archive of the entire LEF output on Monoskop (like Ubuweb, an invaluable resource). The covers and scans are all in the original Russian, but the good people of Monoskop link to a Winter 1971-72 issue of “Screen” which contains a number of LEF texts in translation.

The writing and art in its pages displayed all the same hunger and passion as the editors’ individual outputs – it was a central publication for the Soviet avant-garde and the debates and works contained in its volumes continue to resonate today.

Consider this excerpt from a staff editorial piece: “If stimulus and agit are needed — assemble all the appropriate material available, but bear in mind that agit divorced from a concrete aim to which it is directed, agit transformed into agit in general, a play on nerves, stimulation for its own sake, is agit aesthetics and operates in society like drugs or dangerous drink.” (“Agit” here is shorthand for agitprop, a portmanteau of agitation and propaganda.)

Leaving aside the somewhat outdated prose, LEF’s editorial board may as well be predicting our own political moment in which provocation and nihilistic offense have become ends in themselves for large swaths of the far right (consider that the response to the Paris Agreement was largely positive in this demographic not because of the actual contents of the agreement, but because the withdrawal upset liberals).

Or consider this from “Film Directors, A Revolution” by Dziga Vertov – “I am the cinema-eye. I take from one person the strongest and deftest hands, from another I take the strongest and swiftest legs, from a third the most beautiful and expressive head and I create a new, perfect man in a montage…” Here Vertov expounds upon the theory of montage of Sergei Eisenstein (a fellow LEF contributor). Montage, which in popular terms now refers to a series of short, related scenes combined to show the passage of a long amount of time (as in the ubiquitous “training montage”) was originally meant to refer, more fundamentally, to the incredible potential of film – the ability to edit together a series of disparate (either thematically, or temporally and spatially) shots for a new effect. The writings and films of Vertov and Einstein (“Man With a Movie Camera” and “Battleship Potemkin,” respectively) were incredibly influential in the formation of film theory and practice.

Unsurprisingly, many of LEF’s greatest contributors were Jewish (in just about every artistic avant-garde movement, you will be sure to find at least one Jewish artist). The aforementioned Vertov, Osip and Lilya Brik, and Eisenstein (well, his father was Jewish before converting to Christianity – but we’ll count him anyway) were all Jewish. The journal also featured the work of Isaac Babel (he published a few of the stories that would later be included in the incredible “Red Cavalry” collection) and Boris Pasternak (who won the Nobel Prize for literature in 1958). Although Mayakovsky was not Jewish himself, he was, as previously mentioned, essentially a part of the Jewish Brik family, and also occasionally wrote on Jewish issues as in the poem “Jew,” written for a fundraiser for the OZET (The Jewish Workers’ Cooperative Land Designation Society – which was involved in the formation of the bizarre, fascinating Jewish Autonomous Oblast in Birobidzhan on the Russian-Chinese border). 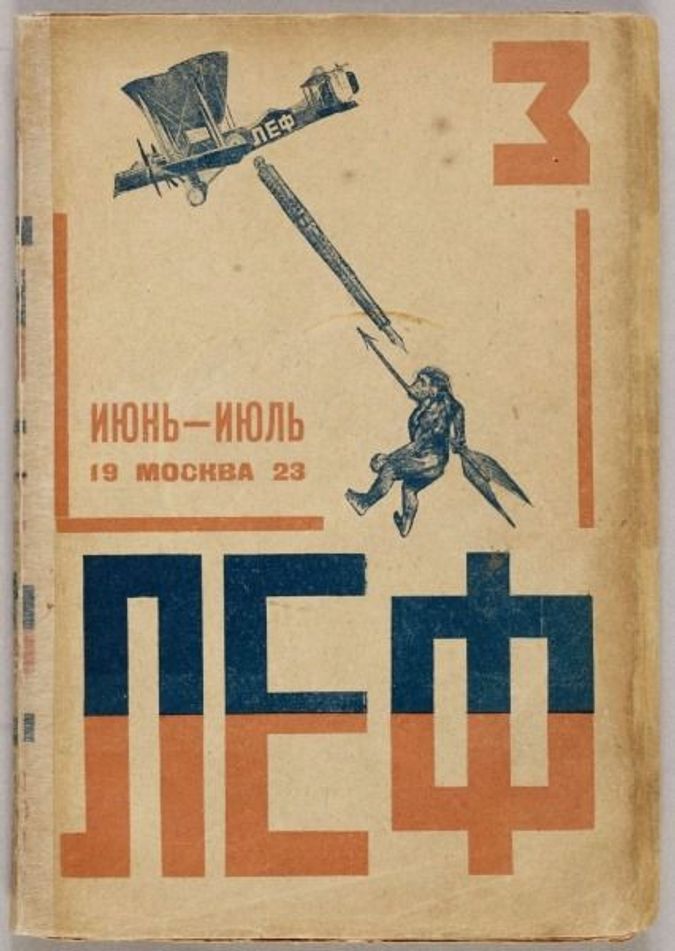 There was more to LEF than the writing – the covers by Alexander Rodchenko are classic pieces of the artist’s output. Issue #3 from 1923 features a photo-collage – a plane with LEF written on the side dropping a pen (a stand in for a bomb) on what looks like a neanderthal holding an oversized arrow. It’s the kind of strange juxtaposition that would inform both Rodchenko’s comic propaganda and the later collage work of Bauhaus’ Laszlo Moholy-Nagy. The later Novy LEF covers often featured individual Rodchenko photographs – usually images of the urban landscape shot at oblique disorienting angles, the kind of photographs for which he would later become famous.

In chapter 4 of Leon Trotsky’s “Literature and Revolution” he tackles the issue of Futurism – an aesthetic movement to which a number of LEF contributors belonged (Russian Futurism differed from Italian Futurism in its rejection of all authority whatsoever – they famously heckled even Marinetti upon his visit to Russia. Even though its proponents would become propagandists for the Soviet state, they held an uneasy relationship to bureaucracy). Naturally, he writes about LEF. His words are critical, but there’s some admiration as well. Among his chief complaints is that LEF was simply ahead of its time – that instead of using art as a mirror and a hammer with which to shape the future, they smashed the mirror and attempted to drag the reticent world into the future, ready or not. And indeed, they were ahead of their time, but not because they were moving too quickly, but because, like all artists who engender this complaint, they were positively of the moment – the world was simply too slow.