For 20 years I had a successful career as one of the first female sit-com writers, with credits including “The Mary Tyler Moore Show,” “The Bob Newhart Show” and “Maude,” among others. After a Writer’s Guild Strike in 1989, I moved from Los Angeles to New York and took a year off to re-connect with my Jewish roots, which are cultural rather than religious. I began a second career with Holocaust-related organizations; I first ran the Speakers Bureau for the ADL in the early 1990s and later spent seven years as the United Nations Observer for the Simon Wiesenthal Center.

In “show biz,” you can be a hyphenate: Producer/ director or, too commonly, an actor/waiter. (People actually pronounce the “slash.”) My mentor, the late television icon Garry Marshall, gave me a special title: “Sitcom writer-slash-Nazi Hunter.” Barump bump! (We comedy people often end a joke with a drum roll; old habits die hard.)

I establish these credentials as a means of explaining why I feel particularly qualified to opine about the new, highly regarded TV comedy “The Marvelous Mrs. Maisel.” I find the show to be problematic in tone, writing, directing and acting.

The series tells the story of a 1950’s housewife who wants to break into standup comedy when the world is neither ready for nor interested in what women have to say. 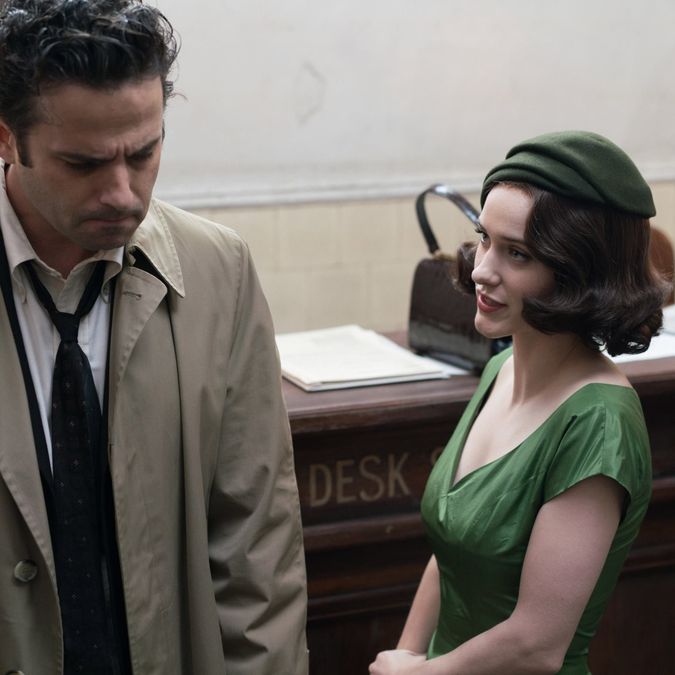 Yet the series, despite its supposed progressiveness, portrays its Jewish subjects as unflattering stereotypes. The titular Mrs. Maisel, known as Midge, has a mother who is shallow and status-seeking, focused only on looks and shopping. Midge’s husband Joel’s father, Moishe — yes, Moishe — brags of saving 13 Jews from the Holocaust, yet he uses them as underpaid labor in his exploitative garment factory. When Midge and Joel initially separate, money proves to be more important than family: Moishe kicks Midge and her children out of the luxurious apartment he paid for.

Midge and her mother are so superficial that they wait for their husbands to be asleep before removing their makeup and setting their hair. They jump up in the morning to fix their appearances before their husbands wake, so-called “Jewish Princesses ” on steroids. Moments in “The Marvelous Mrs. Maisel,” including a brutal family dinner, recall the flavor of “Curb Your Enthusiasm.” That show always treads the line on Jewish stereotypes. We really don’t need another like it.

A particular low point arrives in the fifth episode, when Joel’s parents meet, and of course disapprove, of his new — wait for it —“shiksa.” That was the end for me.

Additionally, the schmaltz thrown into this new series is way over the top. The usually wonderful actors all but “talk with their hands.” Their characters are whiney, and unlikeable to a fault. Oy!

However, my personal dilemma goes deeper. The show creator, Amy Sherman-Palladino — sorry, Amy, it’s not personal! — is the rare very successful woman in television; her prior credits have achieved iconic stature. I have great ambivalence about critiquing the creation of a woman when, for all of us, it is already so hard to succeed. However, in this age of “country over party” when we all must confront the question of what we will do in desperate times, I have to choose “danger over decorum.”

We are living in a world of growing anti-Semitism. Any hint of ugly stereotypes or clichés, even those that are corny or cutesy, gives a hand to those who are eagerly participating in the rise of that prejudice. Anything that may bolster their awful efforts must be called out, even if it’s not intended to assist them. Now, more than ever.

To cite that word that is so overused these days, I just can’t be “complicit.” Yet the other word that most resonated this year has been “feminism.” In writing this critique, I have been torn between the two.

Since I have always supported other women, particularly in show biz, deciding to take a public stand on this was a real internal struggle. In the end, my sensitivity to the anti-Semitic potential of the show made it imperative for me to do so.

Additionally, I knew Joan Rivers, and while Midge is said to be based on her, I don’t see that as working. Joan’s material was first-rate and funny; even initially, but it had real promise. Midge’s comedy career starts as an inebriated, angry mishap, which ends when she shows the audience her breasts. Not the same.

I also knew Lenny Bruce; we went out together, as his mother fixed me up with him in college. The character in “The Marvelous Mrs. Maisel” who is called Lenny Bruce almost betrays the man on whom he is based. In life, he was never into the gratuitous throwing about of dirty words. He talked truth, he didn’t tell jokes. His was a ground-breaking act of free speech. By misrepresenting Lenny Bruce and Joan Rivers, “The Marvelous Mrs. Maisel” risks doing a disservice to the history of Jewish comedy.

On the plus side, the wonderful costumes and art direction of “The Marvelous Mrs. Maisel” are top notch. The premise, that a woman scorned might surpass the husband who abandons her, is so worthwhile.

But I worry that when it comes to anti-Semitism, this very successful show will just — oh let’s continue the metaphor — toss fuel on the fire.

My sitcom self didn’t laugh a lot; my Nazi-hunter self is alarmed. I need a break and nice cup of hot cocoa. (That’s what Midge drinks to calm herself. At least it’s not a “glass tea,” as some of our Jewish grandparents used to call that other drink. Barump Bump.)