The Marvelous Jewishness Of Mrs. Maisel 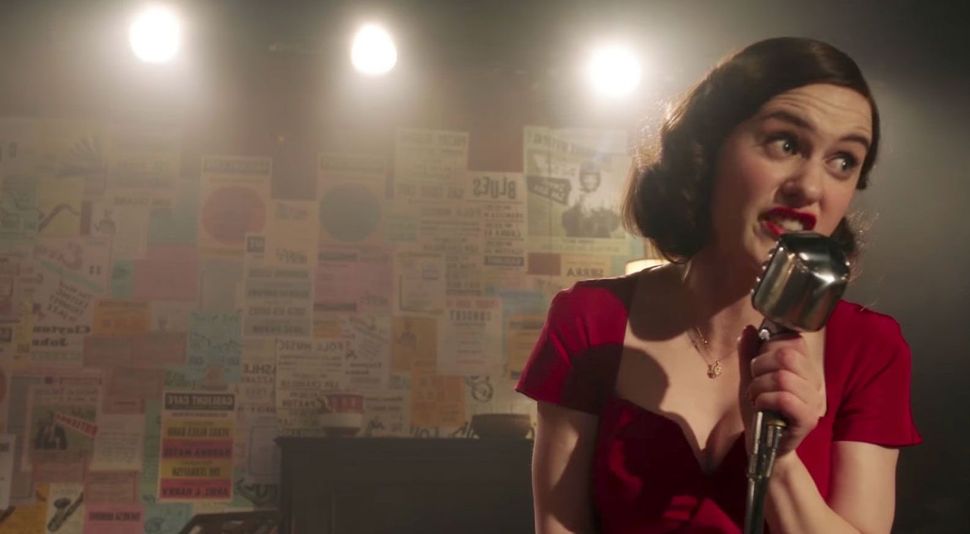 Earlier this month, the comedian Julie Klausner tweeted the results of an online quiz called “Which TV Jewess are you?” Her result was Julie Kessler, the character she played on Hulu’s Difficult People for two seasons. The quiz references five different female Jewish characters on television right now, featured in comedies like Crazy Ex-Girlfriend, Broad City and Transparent. The existence of the quiz is a testament to our current cultural moment, in which Jewish women are influencing the style and tenor of popular television comedy like never before.

And the latest contribution to this trend is Amazon’s new series, ‘The Marvelous Mrs. Maisel’, created by Amy Sherman-Palladino, about a plucky 1950’s Jewish housewife-turned stand-up comic.

Miriam “Midge” Maisel (Rachel Brosnahan) is the daughter of affluent Upper West Side Jews, the mother of two young children, and the supportive wife of her college sweetheart, Joel (Michael Zegen).

It’s 1958 – five years before Betty Friedan’s The Feminine Mystique helped a generation of women realize there was more to life than the domestic sphere. And Miriam excels at being the picture-perfect, dutiful homemaker. Her extensive middle-of-the-night beauty regimen assures that her husband never sees her sans makeup and curls, her regular calisthenics classes keep her slim, and she floats around the kitchen in designer jewel-toned outfits, cooking pans of brisket to bribe the bookers at the Gaslight Café, a dingy Greenwich Village comedy club where Joel vies for stage time. Mr. Maisel is a businessman by day, but his true passion is in telling jokes – though unfortunately, his material is cribbed from Bob Newhart. When Miriam punctures his confidence by pointing this out, a humiliated Joel packs up and leaves, on the night before Yom Kippur.

Miriam drowns her feelings in a bottle of kosher wine, takes the subway downtown, and stumbles onstage at the Gaslight. She’s a natural in front of the microphone, gently teasing the crowd and bragging about her sexual prowess, in her rain-soaked nightgown. Her self-deprecation and vulgarity place her routine firmly in the tradition of Jewish American humor. When Miriam flashes her breasts to the audience, she is arrested for public indecency and thrown into the back of a police car with none other than Lenny Bruce (Luke Kirby) himself.

‘The Marvelous Mrs. Maisel’ prompts us to wonder: What if Bruce had an equally daring, quick-witted female contemporary? It reimagines a key historical moment – the shaping of mid-century stand-up performance as a genre – through a female perspective. The story of comedy in the United States, from mainstream club acts to the underground satire of the counterculture, has been primarily one of great men, with Joan Rivers and sometimes Phyllis Diller standing out as the token exceptions. Mrs. Maisel offers a sort of wish-fulfillment fantasy in which women get the spotlight instead.

Miriam’s mentor is aspiring agent Susie Meyerson (Alex Bornstein), a stocky tomboy in suspenders and newsboy caps who manages the Gaslight and knows talent when she sees it. The two characters have a playful sort of butch-femme banter that nods to the historical reality of the 1960s West Village as a haven for the LGBT community. Susie takes Miriam under her wing, bringing her to different clubs to learn from the other acts, and introducing her to “party records” by legends like Mort Sahl and Redd Foxx. But for all her tough bravado, as a woman herself, Susie’s power in the industry is limited; she has to sneak into the male-only Friars Club for business advice on how to launch Miriam’s career.

It’s a classic fish-out-of-water story at every turn. Miriam’s home life, her lushly decorated gilded cage, contrasts starkly with the bohemian demimonde that is the Village’s burgeoning comedy scene. Her journey to becoming independent and self-actualized puts her in unlikely situations – in a jail cell offering her cellmates tips on how to get blood stains out of fabric, for example, and later, smoking a joint in an alley with a group of black musicians as they compare rap sheets. Where does Miriam truly belong?

Safely cloistered in a well-appointed apartment with a doorman, just a few floors down from her parents, Abe and Rose (Tony Shalhoub and Marin Hinkle), who represent the materialism and conformity that pervaded the decade? Or on stage, entertaining beatniks and communists? Does Miriam want to be, in Joel’s words, a “cool chick” or a “nice girl”? The show is at its best when it propels this central conflict, and less interesting when following the various schemes that Abe, Rose, and Joel’s parents, Moishe and Shirley (Kevin Pollak and Caroline Aaron), concoct to coax their children back together.

The series suffers, like too many period pieces do, from anachronistic dialogue. A few contemporary phrases slipped into the script take us out of the meticulously retro tableau. Worse, many of the lines are cutesy and staged, delivered with a sing-song cadence and exaggerated inflection that almost approaches Fiddler On The Roof territory. (This is apparently part of Palladino’s trademark style).

But beneath the shtick, Mrs. Maisel grapples with the question of how New York City Jews fit into the broader American culture in the mid-twentieth century. Outsiders Susie and Lenny are the creative rebels, the ones who eschew social norms and devote their lives to the arts. Miriam and Joel’s parents, from an older generation, are preoccupied, instead, with mainstream success and status. The dissolution of their children’s marriage registers as a tragedy because it’s an embarrassment to both families, but mostly for Miriam, who faces disproportionate stigma for being a woman going at it alone.

Miriam’s sexually-charged, proto-feminist, routines (she rails against girdles and expresses ambivalence about motherhood) are political, not in the explicit sense that much of male-authored satire is, but in the way that women talking about our everyday lives has always been political during eras in which we are supposed to shut up. It is a tricky recuperative endeavor, to insert fictional women into a male-dominated historical narrative, and Palladino pulls it off.

When real women are missing from the record, female showrunners have to invent them.

Sascha Cohen is a writer and historian living in Los Angeles, completing her dissertation on the history of American comedy in the 1970s and 1980s. She tweets at @SaschaSo70s.

The Marvelous Jewishness Of Mrs. Maisel