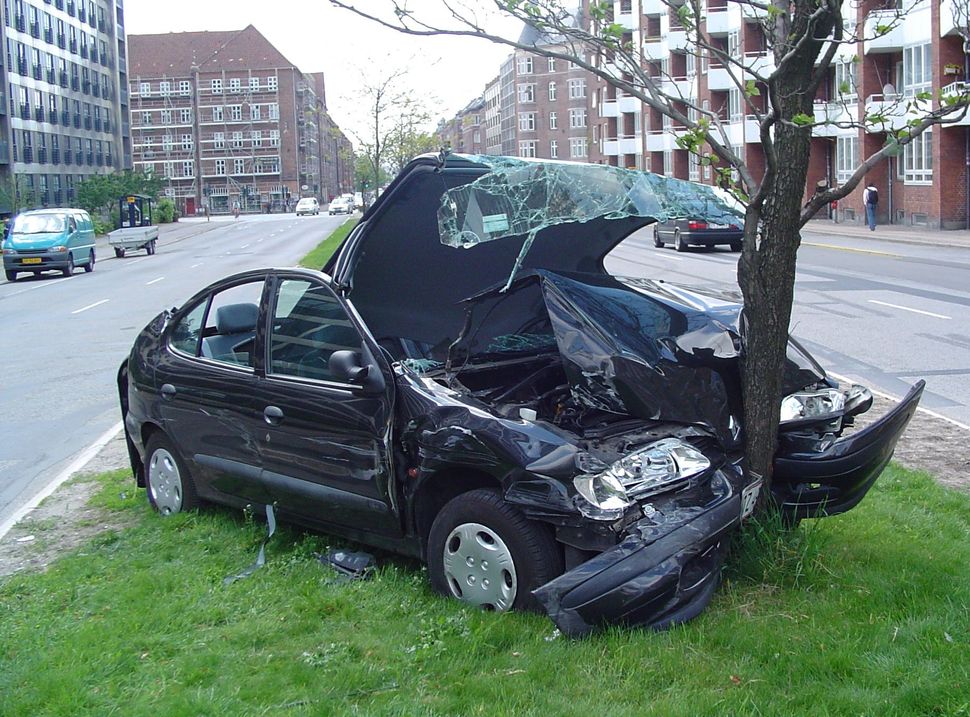 Did God or bad luck make this car crash? Image by Wikimedia Commons

It was the second time I noticed a news story about a fatal crash of a church group that I had the uneasy feeling there was a pattern.

That time, it was Baptists, seniors in their church’s Young at Heart ministry, on their way to “three days of singing, laughing and preaching” at a Fall Jubilee when their bus blew a tire and crashed into an SUV and a tractor-trailer, killing eight. Another time, it was an Assembly of God youth group coming home from a day trip to an amusement park, hit by a drunk driver’s pickup truck, killing 27.

A few more of these, and I became convinced that worshipers of all faiths, on their ways to missions to Botswana and from softball games, were disproportionately vulnerable to slick roads, texting drivers and lightning.

Hearing stories like these, we’re of course sad for the victims and their loved ones. But it’s more than sorrow that grips us, more than the bitter irony they arouse. These stories confront us with the Job question: What kind of God lets good souls suffer? They stir up our fears and confusion about the power of God versus the power of luck. They confront our fragile truce with meaning and purpose with the indignities of chance and the dumb randomness of the cosmos.

Any event can be metaphysically decoded in more ways than one. It’s like that drawing that looks like a duck one way and a rabbit the other, only here the duck is thousands of years old and hundreds of religions deep, while the rabbit is only a handful of post-Enlightenment centuries of you’re-on-your-own, kiddo.

If you believe in a personal God who is active in our lives and involved in all that occurs on Earth, then when bad things happen, in order to comfort yourself, you need faith that God has a plan for us. It may be inscrutable, and we may be too small to comprehend it, but still it’s a good God’s good plan.

But if your God has withdrawn from the world to let free will and the laws of physics prevail; if your God is ineffable, a mystery, Ein Sof, not a God of punctured tires and reckless Instagramming; if your God is a myth that cultures tell themselves to soothe the pain of absurdity — then an accident is just a statistic, not a sign.

Would you describe the passengers in that crumpled Econoline as having “bad luck”? Would you call them “unfortunate”? There’s inconsistency in how we use words, I know, and it’s easy to read too much into metaphors. But when we tie something bad to bum luck or misfortune, or something good to their opposites, I wonder whether we’re tacitly investing them with meaning and purpose in ways that we don’t typically valorize chance or probability.

We don’t say, “Happy randomness!” We say, “Good luck!” We don’t say, “May the odds be with you.” We say “the force.” Perhaps all of us English speakers – atheists and worshipers alike – believe with our tongues, and so in our heads as well, in a force that dwells beyond us.

This came into view for me a few weeks ago, when social media spread the story of a man named Donald Savastano. Talk about luck — he literally won the lottery. A 51-year-old self-employed carpenter in upstate New York, he bought a “Merry Millionaire” scratch-off ticket at a convenience store and found out he’d won the jackpot.

Twenty-three days later, he was dead. When he bought the ticket, he wasn’t feeling so hot, but he hadn’t been able to afford health insurance for a while. But once he had the dough to buy a new truck, think about a vacation and go see a doctor, he was diagnosed with Stage 4 brain and lung cancer.

Set aside the Obamacare question, and whether he’d taken good enough care of himself. I don’t know the answers – let’s just stipulate that he didn’t bring his sickness onto himself, no more than he brought his merry million onto himself.

What made him sick? Chance. Probability. His illness came from nowhere, not from Someone. Our lives depend on billions of dividing DNA strands. Sometimes, randomly, they make mistakes. No divine hand commits those errors. The odds of that happening, like lightning, are indifferent to our loves and dreams.

Yet even though I think that, I feel and say something else. I’m thankful that what happened to him has not happened to me. I’m grateful to live another day. Who am I thanking? What merits my gratitude? I say, “There but for the grace of….” Of whom? Of what? I don’t ask; I don’t answer. I just bask in what poet Richard Wilbur calls “the blind delight of being.”

Einstein famously said that “God does not play dice with the universe.” It was a jibe at Niels Bohr and Werner Heisenberg, whose quantum mechanics and Uncertainty Principle meant that probabilities, not laws, are the ultimate reality. Einstein admitted that he didn’t believe in a personal God, but he maintained that physics would reduce the universe to rules, not randomness. Bohr’s retort was mischievous: “Einstein, stop telling God what to do.”

Years later, Stephen Hawking put a similar point of view this way: “Even God is bound by the Uncertainty Principle…. All the evidence points to him being an inveterate gambler, who throws the dice on every possible occasion.”

A God who has the same chance of rolling snake eyes as I do isn’t much of a God — which is a point that Hawking may be making. But I bet that more than a few atheists are summoning a force more benevolent than chaos when they wish someone good luck, good health and safe travels.