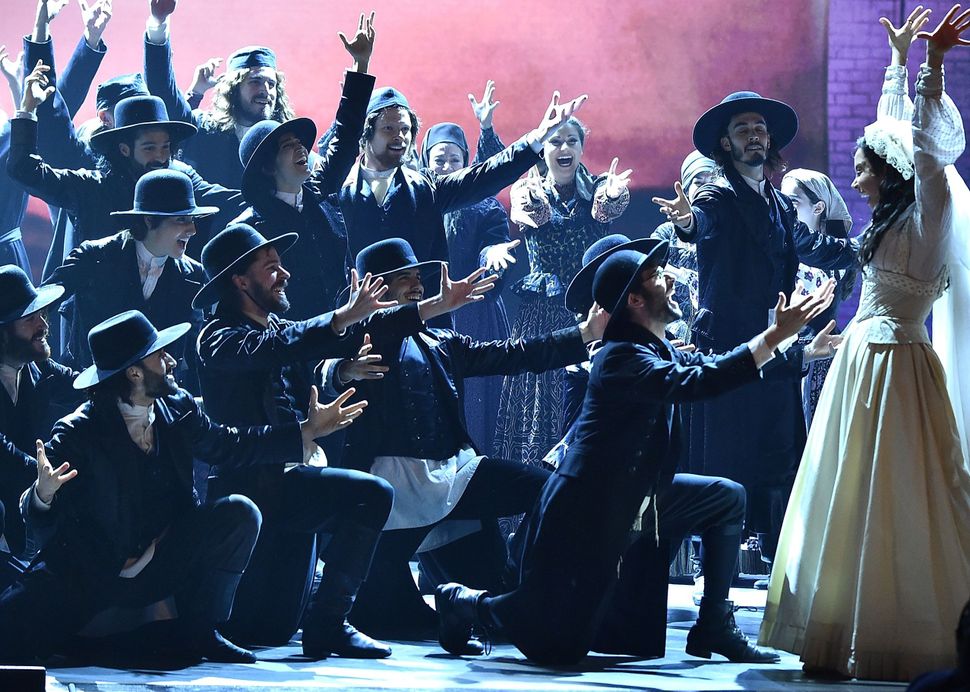 The Broadway revival cast of ‘Fiddler on the Roof’ at the 2016 Tony Awards. Image by Theo Wargo/Getty Images

During the cherry-blossomed blush of the first proper week of spring, on the same day Prince Harry and Meghan Markle announced which musicians would accompany 2018’s most hotly-anticipated nuptials, a group of men across the pond from Kensington Palace rehearsed for another famous wedding.

“You’re presenting yourself to Tevye,” he explained, gesturing to a meek-faced accompanist in the corner. “He’s right there.”

To disappoint Tevye would be to disappoint God. The accompanist struck up the bridge from “L’chaim,” and Kmieć, wearing calf-hugging slouchy red leather boots, hot-toed with flair.

The scene, set in a mirrored midtown Manhattan dance studio, was a dance audition for the American premiere of the all-Yiddish language “Fiddler on the Roof,” which will be presented by the National Yiddish Theatre Folksbiene this summer. Dancers in the production must be artistically adaptable, able to execute a precise balletic jeté just as well as a celebratory promenade on their knees.

Yet before there can be a wedding’s raucous celebration, there must often be pain, and Kmieć’s audition lived up to one of the best-known “L’chaim” aphorisms: “Life has a way of confusing us, blessing and bruising us.” As a group of six men sank to their knees to try one of the most famous dances of “Fiddler” — no, not the bottle one — Kmieć let them know it would be fine if they fell over.

“The more audible sounds you make — like ‘hey!’ — that helps you do the knee stuff,” he said.

At a break in the audition, Spencer Perdeck, a NYU senior from Fort Lauderdale, said he had brought knee pads but left them outside the audition, thinking “the knee stuff” would come later. His knees were surprisingly fine; his quads, not so much.

“Right now I’m schvitzing,” he said. While he knows a smattering of Yiddish from his great-grandparents, he got “a real taste” for the mamaloshen when he auditioned for a 2015-2016 Folksbiene production of “The Golden Bride.” Still, when asked about his dream role on Broadway, Perdeck cited one of the least-Yiddish possible: Elder McKinley of “The Book of Mormon.”

Brandon Walters, who has a puzzle piece tattoo on his arm to symbolize autism awareness, has never done Yiddish theater. He finds the challenge exciting. Reading over samples from the Yiddish-language script, he said, “I love dissecting and working with each word.”

Noah Carniello, clad in all-grey, confessed that he himself isn’t Jewish, but his childhood best friend was. “I was surprisingly surrounded by it because of him,” he said. Around him the resting dancers, their t-shirts patterned with sweat, stretched and gossiped. None had, in fact, fallen over during the audition, although a few had come close.

Carniello has only lived in New York for six months, having moved from his native Canada. So far, he’s found musical theater auditions in the Big Apple less intimidating than he’d expected — even enjoyable.

He was diplomatic on the subject of whether the knee dance itself had been enjoyable. Had he ever been to a wedding quite as exciting as that of Tzeitel and Motel?

“Maybe with a couple tequila shots,” he said.