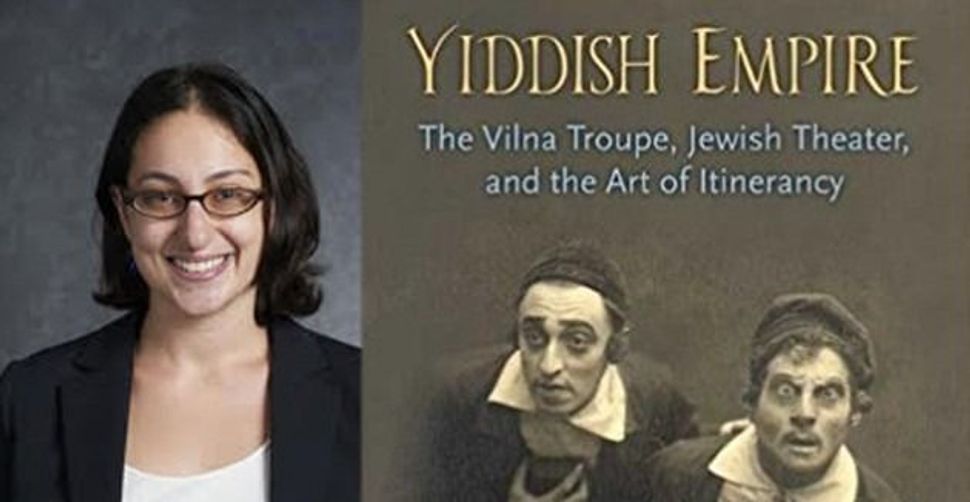 The world-famous Yiddish theater that eventually became known as the Vilna Troupe had its beginnings under remarkable and completely unexpected circumstances.

Before World War I, Vilna had a high-quality Russian theater that attracted a mostly Jewish audience, in part due to the Polish intellectuals’s boycott of Russian culture. On the eve of the German occupation in 1915, the Russians and a number of well-to-do, Russian-acculturated Jews fled the city together with the Russian army. Around the same time, Yiddish-speaking refugees began pouring in from impoverished Lithuanian villages. The new German leaders in the city forbade the use of Russian in schools and in public life, but interestingly, they did permit Yiddish.

This created favorable conditions for the development of Yiddish culture, and specifically, Yiddish theater. As Dr. Jacob Vigodsky, a longtime Jewish leader in Vilna, wrote in his memoirs, the first reaction from the German military administration upon his request to create a Yiddish theater was negative. “I wasn’t discouraged, and on several occasions, continued to push for Yiddish theater, until I received permission a few months later and the Germans were actually impressed by it,” Vigodsky wrote.

The Yiddish theater had two goals: First, to develop a modern secular Yiddish culture and bring some hope to the Jewish community during difficult times, and second, to show the Germans that Yiddish was imbued with sophisticated European culture. The theater succeeded on both counts — not just in their first few years in Vilna, but even later, when the troupe left its hometown and began touring the world. In time, the Vilna Troupe split into several theater companies that traveled all over Europe and America.

Debra Caplan reconstructs this fascinating history in her detailed new book, “Yiddish Empire: The Vilna Troupe, Jewish Theater, and the Art of Itinerancy.” She begins by examining the three unsuccessful attempts to build up a modern Yiddish theater before World War I. Those failures weren’t lasting; in the years after its founding, the Vilna Troupe became a brand recognized in many countries.

In its first years, the troupe adopted the realism of Konstantin Stanislavski’s Moscow Russian art theater. In contrast to the German’s ban on the Russian language, Jewish intellectuals in Vilna held Russian culture in high esteem. In 1920, Caplan writes, the Vilna Troupe underwent a radical change in style. Their shift away from imitating Russian idols and toward a new ethos of theatrical experimentation would later inspire others to follow the Vilna Troupe’s lead.

This upheaval was a result of their production of S. An-ski’s “Der Dybbuk,” which became a hit with Jewish and non-Jewish audiences alike in Vilna and Berlin. Their avant-garde presentation strongly influenced other productions of the play in Yiddish and in Hebrew.

“By the beginning of the 1930s, the original company of fifteen actors had ballooned into seven distinct Vilna Troupes employing hundreds of artists,” Caplan writes.

This proliferation was the beginning of the Vilna Troupe’s downfall. Times had changed, and the style of the Vilna Troupe didn’t appeal to younger and more assimilated audiences of Yiddish theater. Talented young Jewish actors began switching to the English-speaking stage. Even the New York revival of the famous “Dybbuk” in 1936 fell short, closing after six performances.

Meanwhile, the situation in Europe was getting more dire. It became increasingly harder for a Yiddish theater to tour other countries, and non-Jewish audiences were no longer interested in the Yiddish theater.

Caplan’s book is well-complemented by a useful digital tool which highlights all the hundreds of figures that were connected, in some way or another, to the Vilna Troupe over time. No doubt this innovative and creative device opens up exciting new possibilities for the field of contemporary Yiddish research.