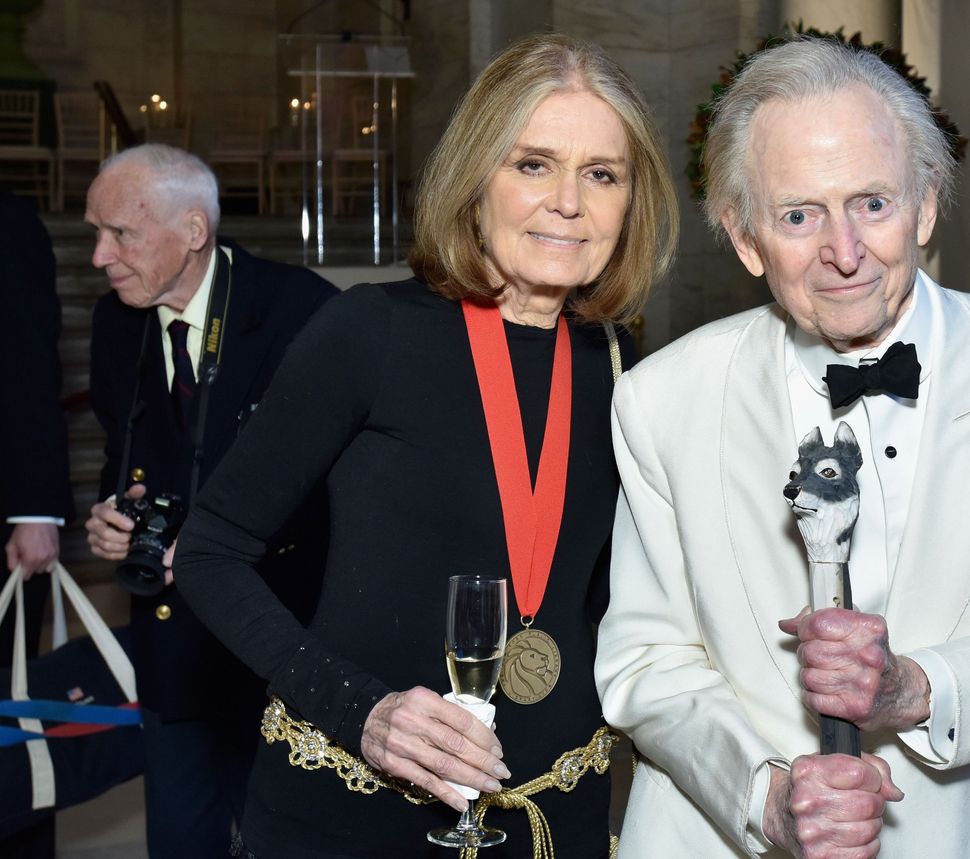 The writer Tom Wolfe, one of the pioneers of the literary movement known as the New Journalism — alongside the likes of Joan Didion, Gay Talese and Jimmy Breslin — passed away on Monday at age 88. Wolfe, who was notably verbose and only slightly less notably eager to get into scraps with his peers, was the sort of quintessential 20th-century American intellectual about whom it’s impossible not to have an opinion, or, more frequently, several. News of his passing was greeted, in the Forward’s offices by distressed groans; one writer pulled a copy of Wolfe’s 1973 book “The New Journalism” out of her bag, having been reading it on the subway this morning.

Wolfe’s fellow writers loved him, hated him, respected him despite their better instincts, envied his talent and chutzpah, found him inspiring and treated his persona as the stuff of legend. Here, in homage to his impact on American letters, are some of the most complimentary, cutting and telling remarks about his legacy, delivered in the midst of the literary squabbles of the past as well as the memorials of the present.

Sagall, host of NPR’s “Wait Wait… Don’t Tell Me!,” paid tribute to the Wolfe’s larger-than-life presence in a series of notes on Twitter. “Trying to finish Bonfire of the Vanities [sic]. Blown through deadlines. Can’t do that anymore. So: he gets up everyday and puts on a pair of jeans he bought for this purpose. And since he couldn’t be seen in jeans, he never left the house. And wrote,” Sagall wrote.

Editor says, “I understand. Send me your notes and I’ll have someone else write it up.” Wolfe sends a letter, “Dear [Editor]” and then thousands of words of notes and observations. Editor removes first two words, publishes it. (I think it was the famed Junior Johnson profile.)

Wolfe merited an admiring mention in Ephron’s essay “Journalism: A Love Story.” Remembering her early days at The New York Post, Ephron wrote “There was a great features editor, Joe Rabinovich, who kept my occasional stylistic excesses in line; he saved me from woeful idiocy when Tom Wolfe began writing for the Herald Tribune and I made a pathetic attempt to write exactly like him.”

Mailer, who unfailingly embodied the misogyny of the midcentury intellectual milieu, somehow managed to deliver a diss toward Wolfe that, despite being directed toward his fellow man, was notable for its extreme sexism. (White guys: Always innovative.) “At certain points, reading the work can even be said to resemble the act of making love to a three-hundred-pound woman,” he wrote, in the New York Review of Books, of Wolfe’s 1998 novel “A Man in Full.” “Once she gets on top, it’s over. Fall in love, or be asphyxiated. So you read and you grab and you even find delight in some of these mounds of material. Yet all the while you resist—how you resist!—letting three hundred pounds take you over.”

Wolfe put Chomsky on the receiving end of his wit in his 2016 book “The Kingdom of Speech,” which took the famous linguist to task alongside Charles Darwin. Chomsky was unimpressed. “What he is up to I have no idea,” The Guardian quotes Chomsky as telling the Observer in response to Wolfe’s attack. “What amazes me is that any of it is taken seriously, since the errors and, in fact, outright falsifications are so transparent.”

Gopnik, a New Yorker staff writer, made fleeting reference to Wolfe in a 2001 piece on the legacy of Mordecai Richler. “Even our best satirists end by genuflecting to our vast and mysterious greatness, à la Tom Wolfe,” he wrote. Gopnik further reflected on Wolfe’s impact in a remembrance published after Wolfe’s death. “His style, when it emerged in the mid-nineteen-sixties, was genuinely, breathtakingly arresting, and remains startlingly original,” Gopnik wrote. “Its superficial affect — all those ‘Zowies!’ and ellipses and broken sentences — was like the sound of AM radio shows in the same period, a collage of attention-seeking screams.”

Orlean, also a New Yorker staff writer, offered her brief respects to Wolfe on Twitter. “Tom Wolfe has died,” she wrote. “His work changed my life and convinced me to write nonfiction. Fare thee well, Tom.”

In an obituary for the Daily Beast, Morris revisited Wolfe’s explosive and controversial New York Magazine essay “Radical Chic: That Party at Lenny’s,” in which Wolfe unapologetically sent up Leonard Bernstein and his wife, Felicia Montealegre, for throwing a very bourgeoise fundraiser for the Black Panthers. (That essay was later reprinted in a book.) “As he looked back on it all, Wolfe decided ’70s ‘Radical Chic’ was the favorite of his books — and what’s not to love about Lenny and Felicia Bernstein inviting a bunch of Black Panthers into their Park Avenue palace and having white maids serve them these nice little Roquefort cheese morsels rolled in crushed nuts, along with asparagus tips in mayonnaise dabs, and meatballs petites au Coq Hardi?” Morris wrote. “After the book appeared to great acclaim, Wolfe’s father uttered words of praise every writer yearns to hear. “God,” Thomas Wolfe Sr., told his son, ‘you’re really a writer.’”

Ioffe, a contributing writer at The Atlantic, put it with a most un-Wolfe-like succinctness. “RIP Tom Wolfe,” she wrote on Twitter. “He would’ve been the perfect author to chronicle this age.”