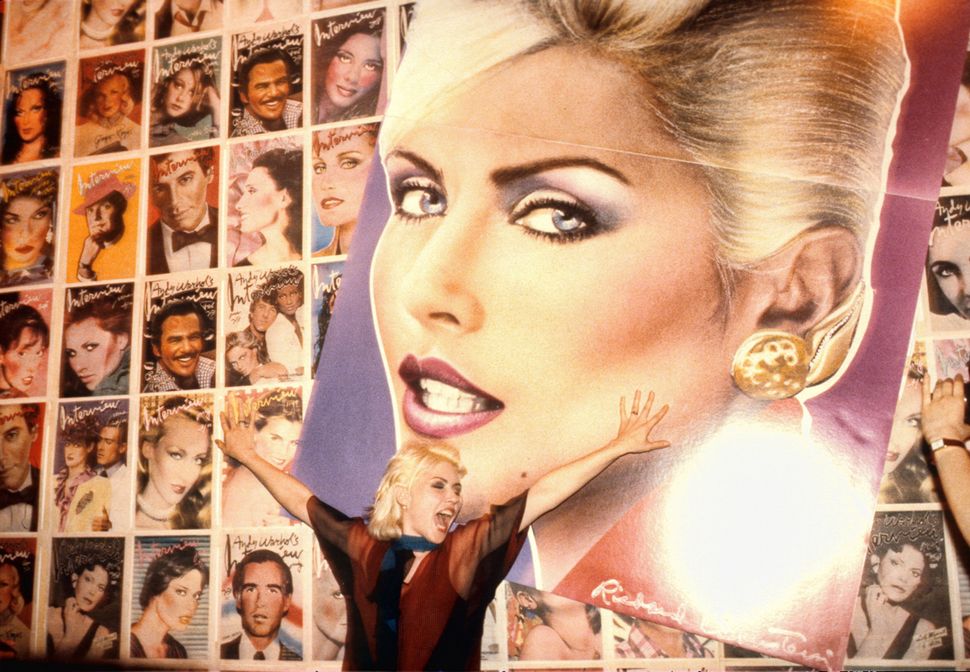 June, 1979: Debbie Harry of Blondie in front of a wall of Interview Magazine covers, including a blown-up cover of her own face. Image by Allan Tannenbaum/Getty Images

Andy Warhol gave the world many things, among them that iconic Campbell’s soup can, those even more iconic portraits of Marilyn Monroe, an eight-hour film of the Empire State Building from a single perspective and Interview Magazine.

As of Monday, that last item, which Warhol founded in 1969, is no more. Employees of the magazine took to Twitter to share the news that it had folded, and the Observer reported that the publication, which is facing multiple lawsuits alleging unpaid compensation, has filed for Chapter 7 bankruptcy.

The magazine, which maintained Warhol’s presence even after his 1987 death by asking celebrities questions from his writings, had in recent years become known for its celebrity-on-celebrity interviews — Elton John on Eminem, anyone? In homage to Interview’s nearly five decades of cultural contributions, here are some of our favorite entries from its archives.

The late Carrie Fisher’s creativity and humor were unmistakable in her 1990 conversation with Lisa Liebmann for Interview. “Growing up I felt like a Jew among WASPs,” Fisher said.

In a 2017 installment of “Q & Andy,” the feature in which Interview asked figures of notes questions from the work of Warhol, the then-90-year-old Brooks displayed a lasting irreverence. “What color are your eyes?” asked the magazine. “Blue,” Brooks responded. “Normally Jews have brown eyes, but my grandmother, who came from Russia, must have had some hanky-panky with a Cossack.”

Interview tried something different when featuring Cindy Sherman in 2008, soliciting questions for the artist from a variety of her personal and professional acquaintances. “When were you most stuck about what to do next, and what did you do next?” asked Peter Schjeldahl, head art critic at The New Yorker. “Right after 9/11 I couldn’t see the point in making art,” Sherman replied. “My first attempts were too sad and lifeless. Then I made a couple of Rosie the Riveter-type of portraits: heroic ordinary women, full of optimism.”

Bryce Dessner of The National interviewed Glass for Interview in 2014, when the composer was 77. “I kind of do what’s in front of me, and I try to keep what’s in front of me interesting,” Glass said, when asked about his creative process. “And the other thing I do — and this is actually very conscious—is that I shift between mediums very frequently. Instead of taking a break from writing, I just write in a different medium or in a different way or for a different purpose, so that I don’t actually stop writing—I just go to something else.”

Ryder spoke to Stephen Mooallem in 2009, a year before making her unforgettable appearance in “Black Swan.” The two discussed the peculiar condition of finding fame when very young. “It’s really sweet when younger actresses come up to me,” Ryder said. “It’s so touching because I know how they feel. I know what they’re going through. It’s really tough to suddenly be very famous. I think you get this feeling like you have to kind of be what everyone thinks you are, and if you slow down, then it’s all going to go away.”

Craig Hubert interviewed the director and actor Waititi in 2012, following the debut of his acclaimed narrative feature “Boy.” “No, I never wanted to be a filmmaker,” Waititi said, in response to a question about how he came to his career. “I still, sometimes, think I got sidetracked by this, like this is a tangent. My main thing was painting; I was just going to do that. I always doing comedy and acting, and I really enjoyed doing that—just making stuff up with my mates.”

Pop culture’s most iconic sex therapist participated in a “Q & Andy” in 2015. “Would you ever marry one of your fans?” asked the magazine. “If they are intelligent and a widower,” Dr. Ruth responded. “And not too tall.”

Ah, 2009, when pop culture wasn’t guaranteed to too-often dwell on the romantic travails of Drake. “Being anointed the biggest Jewish-Canadian rapper in the world might sound like faint praise, but Drake isn’t exactly playing the Yukon bar mitzvah circuit,” Dimitri Ehrlich wrote; Drake, who’d recently found success with the single “Best I Ever Had,” was about to release his debut album.

Five years pre-Pulitzer, Erykah Badu interview Lamar, then 25 years old and fresh off his first major-label album. “As a kid I was always fascinated knowing that I could be the best at something—like Jay-Z or Nas or B.I.G.,” Lamar said.