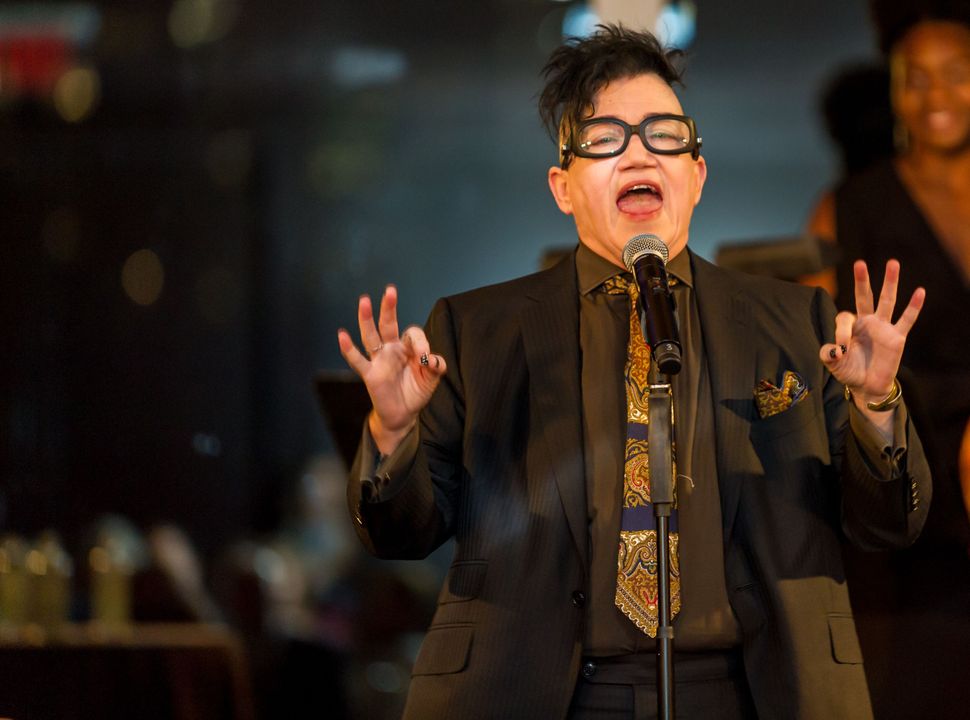 Lea DeLaria performs at the National Museum of American Jewish History’s Only in America Gala honoring Leonard Bernstein on May 22, 2018. Image by John Chan Photography

You know you are at a gala in New York if most every woman in attendance, yourself included, is wearing black. In another city, on another occasion, the solemn palette might register as funerary. At a gala celebrating the centenary of Leonard Bernstein, composer, conductor and reigning doyen of a certain era of New York social life, it was obviously celebratory.

And how many variations on black there were, at the National Museum of American Jewish History’s 2018 Only in America Gala. (Phew!) Lace, draped backs, strange structural adornments, elegant capes, black net overlays, a single open-back jumpsuit, one daringly suggestive knot just below the navel. Bernstein was known for his ability to craft seemingly infinite harmonies on one central idea, and so the harmonies of black on display were not just very New York, but also, in their own way, very Bernstein.

(“I wish I’d put tanner on my arms,” one young woman in a bandage dress — black, obviously — sighed while in the bathroom. Could the subject of self-tanner make for a meaningful comment on Bernstein? Maybe? No? An eavesdropper returned to correcting her lipstick; the metaphor may only extend so far.)

No homage to Bernstein, however organic or intricate, can quite touch the brilliance of its object. A video tribute, featuring Alec Baldwin, Tony Kushner and other similarly lustrous Bernstein fans, felt like a gala necessity. Why would one care what Baldwin might say about Bernstein, when one could simply listen to Bernstein, and know more intimately and immediately his worth? True genius speaks best for itself: When the Fiorello H. LaGuardia High School Show Choir launched into a medley of songs from “West Side Story,” beginning with “Something’s Coming,” nary an eye turned away from the stage. And when Lea DeLaria of “Orange is the New Black” took the stage to perform two Bernstein numbers — “Cool,” from “West Side Story,” and “I Can Cook Too” from “On the Town” — the mouths at a table of publicists and journalists went agape.

One of those journalists craned her neck at an unusual sight at an adjacent table: A young man in a sky-blue button-down was drinking a glass of what appeared to be rosé, into which he had ingloriously plunked an entire peeled carrot. She had been watching this man earlier, from the first appearance of the carrot-in-wine, seeking culinary insight. Had he eaten the carrot? Was it there just for whimsy? Which would be more Bernstein-like, the pursuit of strangeness for strangeness’ sake, or the combination of unlikely flavors in the hope that they might just make something good?

Decidedly the latter; the journalist was pleased to see the young man had taken at least one bite of his liquor-soused vegetable. She considered asking him for comment. But DeLaria was launching into her second song, and there was steak on the table, a rare treat for a frugal reporter. I’ll just observe the strange cocktail as I leave, the reporter thought, lifting her fork. After all, if the young man’s creation was genius, its fate would speak for itself.