Philip Roth And The Yiddish Tradition 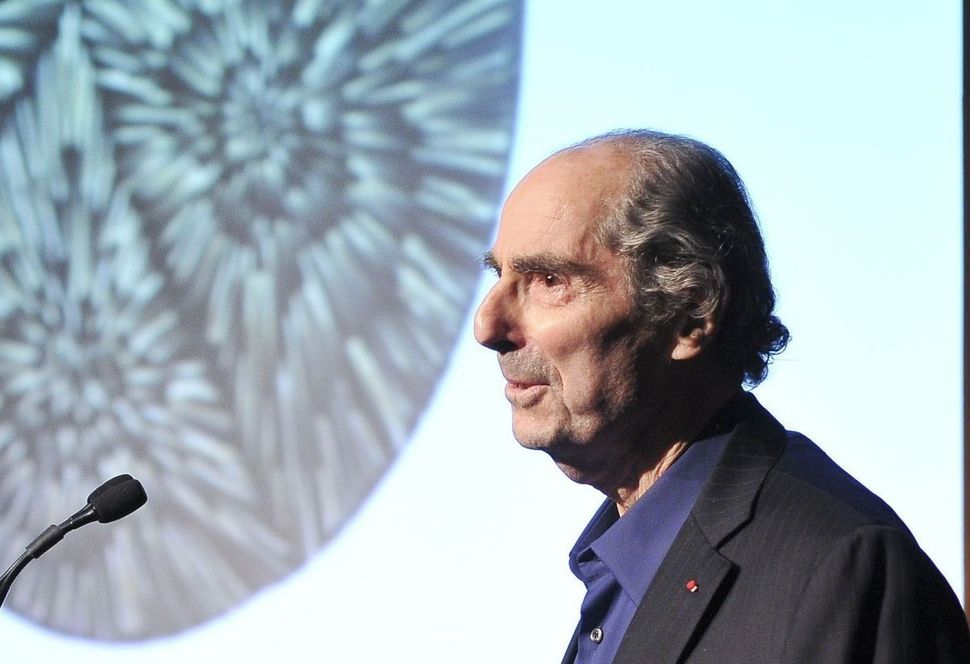 In the course of their ongoing debate, the literary critic Irving Howe used to complain that Philip Roth’s writing suffered from a weak connection to the Jewish tradition and that he was a writer with a “thin personal culture.”

What strikes us more than 40 years later, and just a few weeks after Roth’s passing, is how deep Roth’s roots were in his own culture and the world view of the Jews among whom he had grown up. Howe’s grievance against Roth is the prejudice of an older generation that couldn’t imagine how a Jew could be “authentic” if he or she didn’t speak Yiddish, had no personal connection with immigration and expressed no feeling for what Howe himself had termed “the world of our fathers.” In his complaint lies the fear of Howe’s own obsolescence, masquerading as an identification with “tradition,” and with “roots” that he had otherwise long since dismissed.

It’s true that Roth couldn’t speak Yiddish, disregarded religion completely and wrote with no nostalgia whatsoever about the East European Jewish past. In this, he represented most Jews of his generation, and this is the source for the “social” depth of his prose as well as the richness of his imagination. Roth recognized that English could be as strange and exotic in the mouths of his parents’ generation as Yiddish was to their children; that Newark, New Jersey, could be as sociologically varied, and just as Jewish, as Warsaw or Vilna; and that the life of Jews in his generation — a generation that had witnessed the Holocaust, the founding of the State of Israel, the last vestiges of legal discrimination against Jews, the unbelievable victory of the Six-Day War and the discontent of the ongoing occupation in the territories — is as historically and Jewishly significant as any other generation. Roth’s chronicle of his generation, written in nearly three dozen books, is as detailed, insightful and complex as the work that the three classic writers of Yiddish literature — Mendele Moykher-Sforim, Sholem Aleichem and Y. L. Peretz — dedicated to the Jews of the Pale of Settlement a century before him.

Both distinguished critics and average readers of the Yiddish classics have complained of their portrayal of Jews and Jewishness; if one could speak as idiomatically in Yiddish as in English about the concept of self-hatred, Mendele might have been pinned with the label as readily as Roth. From the beginning of the modern era, with the memoirs of Solomon Maimon, the poetry of Heinrich Heine, and the first writings in Hebrew and Yiddish of the Eastern European purveyors of the Haskalah (the Enlightenment), there has not been a significant writer of Jewish origin who hasn’t been accused by someone of self-hatred. About a year ago I compared two Jewish writers frequently accused of self-hatred, Gertrude Stein and Irene Némirovsky: Némirovsky wrote about Jews in a consistently negative light, whereas Stein in her public writing never made mention of her Jewish identity at all. Which of these strategies, I wondered, gives greater evidence of self-hatred? The term “self-hating Jew,” I concluded, is merely a synonym for a “self-writing Jew.”

My colleague at the Forverts, Jordan Kutzik, has written about Roth’s “ambivalence” toward religious observance. But in fact, there is almost no genuine depiction of traditional Jewish culture in Roth’s work. The Hebrew school in his early story “The Conversion of the Jews” (1959) is less an “Orthodox-traditional” day school than an “American-conformist” Hebrew school, where what is studied bears no resemblance to everyday life. Roth’s complaint doesn’t concern the content of religious belief but the superficiality of American culture, which Jews, largely middle-class citizens and no longer immigrants, have adopted as “the new Torah.” In the story “Eli, the Fanatic,” from the same collection, it’s the worldview of Reform Jews, not the helplessness of traditional immigrants, which is held up to ridicule. In the same regard, “The Plot Against America” (2004) takes as its villain a Reform rabbi, not an Orthodox one, and his villainy consists of his counsel to assimilate, even into a society governed by Nazis.

In the few instances where Roth demonstrates an awareness of Jewish thought, his tone is precise and perceptive. For example, in “Operation Shylock”(1993), a character creates an extended comparison between the influential rabbi and ethicist Chofetz Chaim and the founder of psychoanalysis, Sigmund Freud, based on the fact that although they lived in the same era, they represented opposite world views and therefore serve as mirror images of each other at inverse ends of modern Jewish culture.

In a larger context, one can say that Israel and the U.S. serve as similar mirror images in Roth’s work, at least from “Portnoy’s Complaint” to “Operation Shylock.” At the end of the former novel, Roth’s most renowned and best, Alexander Portnoy finds himself in Tel Aviv, where he attempts a parodic seduction of a female Israeli soldier. It is noteworthy that the novel takes place in 1966, but was published in 1969. The reader is aware of a history that these two characters have yet to experience, that of Israel’s victory, the American race riots of the late 1960s in places like Newark and the difficulties associated with Israel’s new role as a military power. What had been utopian in 1966 about both societies was already dystopian in 1969, and Roth uses the two mirror-images to summarize the psychological and ideological paradoxes on which “Portnoy’s Complaint” is built.

Although one can complain that in the last 20 years of his career Roth had ceased to write comically, his writing throughout remains rooted in satire, and all the reflected ideological positions are undone in his work by their close proximity and competition with one another. This grounding in satire is another similarity between him and the Yiddish classics. His three greatest achievements, “Portnoy’s Complaint,” “Operation Shylock” and “Sabbath’s Theater” (1995), are all dedicated to the idea, perhaps closer to Shakespeare than to Mendele or Peretz, but rather close to Sholem Aleichem as well, that the human body and in particular the male body, with its desire and its frustrations, will always defeat ideology and idealism. Men like Portnoy, Mickey Sabbath, and the “Philip Roth” which the author presents as protagonist in “Operation Shylock” — similar, in fact, to what Mendele does in his novel “Fishke the Lame,” and what Sholem Aleichem does in his autobiography, “From the Fair” — can’t function as ideological figures because they are caught in the social and sexual politics of their own bodies.

Less successful are the novels Roth dedicates to specific ideological positions. In this category, his first post-Portnoy novel, “Our Gang” (1971), is a one-dimensional satire of the Nixon administration that, despite the crudity of its writing, doesn’t capture the genuine evil of Nixon as a person or politician. Even “The Human Stain” (2000) is ruined in part by overly long polemics against “identity politics” and a completely unconvincing caricature of contemporary feminism.

This leads to the most serious critique of Roth’s career as a whole: That of his misogyny and his lack of interest in creating three-dimensional female characters. One learns from Roth’s heroines or his sexual politics about women no more than one learns about Jews from Fyodor Dostoevsky, or about the effects of colonialism on Africans from Joseph Conrad. One can, however, learn about the effects of racism on the colonizer from Conrad, and about anti-Semitism from Dostoevsky. In the same way, one can certainly learn about misogyny from Roth.

In his best writing, we perceive that Roth creates enough distance between the reader and his protagonist, like Portnoy or Sabbath, to demonstrate how absurd, narrow-minded, and self-destructive that hero’s hatred of women is. Since the time of Aristotle, it’s been a given that tragedy is a condition that the tragic hero creates for himself or herself. Roth’s characters suffer from the same conflict, completely robbed of tragic dignity or grandeur. This is the comic condition that his writing brings to light, and this is the quality that distinguishes his best writing from the work of other misogynist writers, both those who influenced Roth, like Saul Bellow, and his contemporaries such as John Updike, Norman Mailer and Tom Wolfe. Among the authors in this list, Roth is today the one whose fiction seems closest to the present moment, and he is also the one most likely to be read with the greatest insight and enthusiasm a hundred years from now.

Philip Roth And The Yiddish Tradition