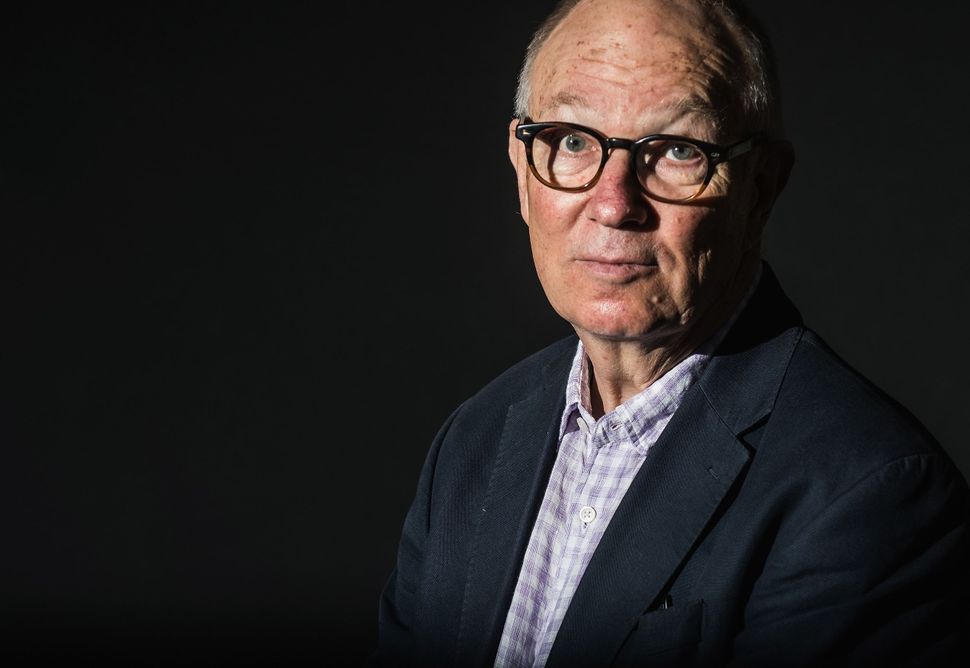 In Ian Buruma’s eyes, there is something cruelly ironic about the circumstances of his departure from the New York Review of Books.

As the broadsheet’s editor-in-chief, he had published Jian Ghomeshi’s essay “Reflections from a Hashtag,” in which a man accused by over 20 women of sexual assault meditated on how social media scorn had changed his life. In doing so, Buruma found himself the subject of social media outrage, and was shortly afterwards ousted from his position of just over a year. “I have now myself been convicted on Twitter, without any due process,” he told the Dutch outlet Vrij Nederland after his exit.

His response is striking for its predictability — how often, in recent months, have we heard similar cries of martyrdom? — but also, more significantly, for its sexism. And its tacit prejudice is upheld by the support of the 110 NYRB contributors, including Joyce Carol Oates, Anne Applebaum, Ariel Dorfman, Colm Tóibín and George Soros, all of whom signed a letter defending Buruma sent to reporters yesterday.

The initial controversy over “Reflections from a Hashtag” centered on the apparently unfettered control it gave Ghomeshi, a Canadian former radio host, over the story of his experience being accused of sexual harassment and assault. Touted on the cover of an issue devoted to “The Fall of Men,” the article, which has since been updated, originally included a number of factual inaccuracies about the number and range of allegations against Ghomeshi, some of which had contributed to his 2014 departure from the Canadian Broadcasting Corporation. Those allegations include punching a woman in the head, choking, biting and verbal abuse. Yet “Reflections from a Hashtag” 3,400 words on Ghomeshi’s life “constantly competing with a villainous version of myself online,” was published unaccompanied by any comment from his alleged victims, or any indication that the NYRB had even reached out to them.

But Buruma further fueled that controversy, primarily through an interview he gave to Slate’s Isaac Chotiner about the essay’s path to publication. “The exact nature of [Ghomeshi’s] behavior — how much consent was involved — I have no idea, nor is it really my concern,” Buruma said. Buruma left the publication shortly afterward, and the publisher of the NYRB, Rea Hederman, released a statement saying the Ghomeshi article had not undergone the broadsheet’s standard editorial process, and that aside from Buruma, it had only been reviewed by one editor, also a man. Female members of staff had been, he wrote, “excluded from the substantive editorial process.”

Buruma’s approach to the article provides grounds for a number of complaints, foremost among them, per even his own tepid admission, that it was profoundly insensitive to women. (“You could be right that it gave him too much room to tell his side of the story, without a response and without critical questions,” Buruma told Vrij Nederland.) Those complaints, not coincidentally, were made most loudly by women, on Twitter and elsewhere. “Wanna know how male abusers get their comebacks?” wrote the feminist writer Jessica Valenti. “By having sexist male editors feel bad for them!” “If, as Ian Buruma insists, the Ghomeshi case amounts to ‘sexual behavior is a many-faceted business,’ why didn’t he run companion essays by the women who were punched, choked, or assaulted?” asked the novelist Laila Lalami. “Why is his intellectual curiosity confined to Ghomeshi?”

Buruma’s statement that he, alongside Ghomeshi, had been “convicted on Twitter,” “without due process,” suggests that the anger of Valenti, Lailami and the scores of other women who spoke out was responsible for his fate, rather than his own mistakes. That’s a sentiment repeated by the authors who this week sprang to his defense, writing in their letter “we find it very troubling that the public reaction to a single article… should have been the occasion for Ian Buruma’s forced resignation.” It’s a shunting of responsibility, a way of saying that the angry women are responsible for what happened to him, rather than the things he decided to do that invited their anger. More significantly, it implies that that anger is both unjust and anarchic, an extrajudicial force — despite the fact that Buruma’s exit from the NYRB has nothing to do with the legal system — spinning out of control.

It’s a telling stance for a man who, in his year at the helm of the NYRB, was the gatekeeper for one of the most intellectually prestigious publications in the country — a publication for which, as Chotiner pointed out, women made up only 23.3% of the authors published in 2017. Buruma maintains that the NYRB was the appropriate venue for Ghomeshi’s navel-gazing, raising the question: What does he think might be the appropriate venue for the anger that navel-gazing provoked?

What Buruma’s response reveals is that he wants, like Ghomeshi, to retain control of the narrative. The opposite of the so-called Twitter mob is the editorial process enshrined at publications like the NYRB; that’s the process with which Buruma is familiar, so naturally it’s that which, even when he chooses to subvert it, he believes to be right. It’s also a process that, at the NYRB as elsewhere, has often kept women from having a public platform for controversial opinions. Social media, despite its many ills, has created an arena in which women are able to air their justified outrage without shaping it to meet the editorial judgment of a man.

Women publicly stating their fury with someone isn’t a means of convicting that person of an undefined crime. It’s a statement of complaint with little practical application; the people voicing objections are not the ones making decisions. Hederman, the NYRB’s publisher, is a man, and his conversations with Buruma led to Buruma’s exit. But to Buruma, the culprits are the people who took to an unedited platform with words he himself would have likely been reluctant to publish.

That stance gives the lie to the authors defending him, who commented that under Buruma, the NYRB’s pursuit of intellectual openness had “extended its range.” “His dismissal in these circumstances strikes us as an abandonment of the central mission of the Review, which is the free exploration of ideas,” they wrote. Free, perhaps — but only for some.