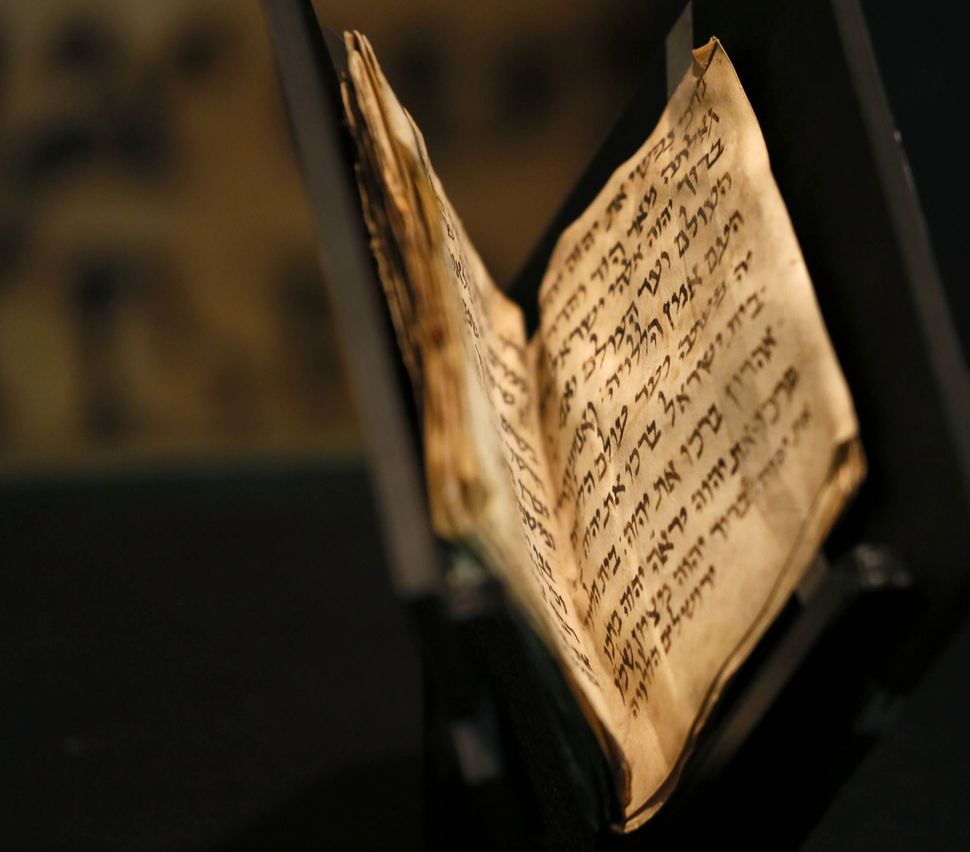 How can one find fresh nuance in an over 2,ooo-year-old book? If the book is the Hebrew Bible, by returning to the original Hebrew.

After over two decades, the 83-year-old literary critic and translator Robert Alter has completed his translation of the Hebrew Bible, an undertaking that has resulted in over 3,000 pages of commentary and text. The project is believed to be the first single-author scholarly translation of Judaism’s central text into English.(Not content to leave us with this massive work, Alter, an emeritus professor of Hebrew and comparative literature at the University of California, Berkeley, is following his Bible up with the forthcoming “The Art of Bible Translation,” detailing what he learned in the process.)

WATCH FOR THE FORWARD REVIEW OF ROBERT ALTER’S TRANSLATION, COMING IN 2019

“It’s the language,” Alter told The New York Times’ Avi Steinberg, describing how he got pulled into the project. “The artistry of the Hebrew Bible, whose full colors and intricate patterns and designs we can never see in full, especially as they have faded under the accumulations of theological and historical readings. And the task of restoring those original colors and shadings — their nuances — is, I believe, still incomplete.”

Alter told The Times he found the poetry of the King James Bible tough to match. That text, translated by Protestants in 17th century England, included a Christian bias; has been the dominant English translation of the Old and New Testaments for over 400 years; and Steinberg concludes, was not overly concerned with the syntax of the original Hebrew, something Alter hoped to address in his translation.

Alter’s version of the Book of Jonah, for example, substitutes the King James translation of the word nefesh, as “soul” for “neck.”

“That Hebrew word, nefesh, can mean many things,” Alter told The Times. “It can be ‘breath’ or ‘life-breath.’ It can mean ‘throat’ or ‘neck’ or ‘gullet.’ Sometimes it can suggest ‘blood.’ It can mean ‘person’ or even a ‘dead person,’ ‘corpse.’ Or it can be ‘appetite’ or something more general: ‘life’ or even ‘the essential self.’ But it’s not quite ‘soul.’ ”

Given the context, Alter settled on “neck,” as the next line mentioned how seaweed covered Jonah’s “head.”

But perhaps the biggest boon to English readers is how Alter’s more literal translation realizes the psychology of biblical characters.

In Genesis, after Sarah gives birth at the age of 90, The King James Bible has her riff on the Hebrew name of her child, Yitzhak, or “he who laughs.” “God hath made me to laugh,” Sarah says, “so that all that hear will laugh with me.”

Alter’s translation grounds the first matriarch of Judaism in a human moment of poignant uncertainty: she says “Laughter has God made me,/Whoever hears will laugh at me.” As Steinberg noted, given Sarah’s advanced age, she fears society is likely to laugh at rather than with her.

The Times reports that Alter fell into the work of Bible translation by accident. Though his love of Hebrew dates to his youth, when he strived to memorize a Hebrew-Hebrew dictionary, he only began translating in the 1970s, well into his time as a professor at UC Berkeley, when he was writing critical essays on the Bible. He found the existing English translations didn’t communicate the Hebrew rhythms he was looking to analyze. To communicate them to English readers, he had to translate the Hebrew passages to English himself.

Alter eventually moved beyond those essays to a major work of biblical analysis: his influential 1981 book “The Art of Biblical Narrative.” In that text he contradicted the then-popular theory that the editors of the Bible compiled the multi-authored texts of the books with no concern for interstitial continuity. Alter argued that a late-stage editorial hand or “Arranger” was behind the structure of the Bible and that the resultant work of what he termed “composite artistry,” is both coherent and deliberate. This authorial view of the Bible may well have prepared Alter for his bold foray at solo translation. Of course, that wasn’t always the plan.

“I certainly never planned to sit down and translate Leviticus,” Alter told The Times.

PJ Grisar is the Forward’s culture intern. Contact him at grisar@forward.com