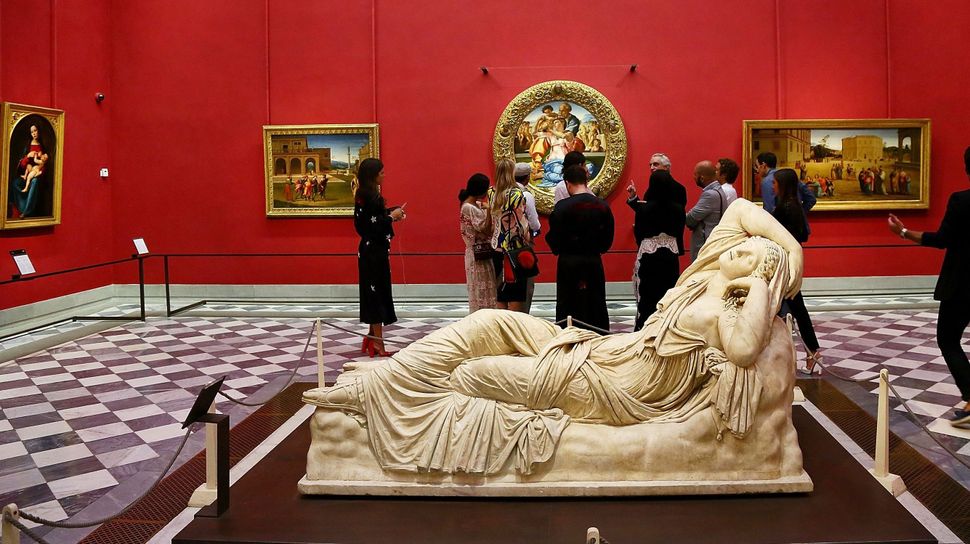 A room at the Uffizi Gallery in Florence, seen in 2016. Image by Ernesto S. Ruscio/Getty Images

The painting hung for over a century in a Florentine palace, framed against a wall covered in red silk. Petite and extraordinarily detailed, the 18th-century work shows full-blown roses and peonies spilling from a vase, surrounded by a tangle of leaves and smaller flowers. The scene suggests opulence, pleasure, ease.

But the recent history of Jan van Huysum’s “Vase of Flowers” is far from peaceful. The painting, which prior to World War II was owned by the Uffizi Gallery in Florence, Italy, was stolen by German soldiers in 1944. It’s been in private German hands for decades, and this week, the Uffizi took an unprecedented step in trying to secure its return.

It took to social media.

The move was remarkable for its rarity. While the ongoing international effort to coordinate the restitution of artworks looted by the Nazis often makes headlines, the parties engaged in that effort tend to maintain at least a veneer of diplomacy. That’s primarily because much of the work of restitution takes place within the legal system — here’s an overview of how that’s working out — but for the Uffizi, the recourse available through that system may be limited. While Germany has made efforts to advance the cause of restitution, the country has a 30-year statute of limitations on claims of stolen property. As Hyperallergic reported, Germany’s government contemplated changing that law after the 2012 discovery of the Gurlitt hoard, but no alteration has yes been made.

Efforts by both the Uffizi and Italian authorities to reclaim the painting have so far been unsuccessful. Hence the museum’s turn to social media, with a Tuesday post to Twitter beginning the offensive.

In a brief video posted to YouTube that same day, the Uffizi’s director, Eike Schmidt, placed a black-and-white reproduction of the work, with the word “Stolen” emblazoned around the edges in several languages, in the room in the Pitti Palace – which the Uffizi manages — where the painting originally hung. That room, known as the Room of the Putti, displays a large number of Flemish paintings; its holdings include works by William von Aelst and Paul Bril. Speaking in Italian, Schmidt said his wish for 2019 is that the van Huysum painting might be returned.

Schmidt told The New York Times that the Uffizi has been engaged in longterm negotiations for the painting’s return with the German family that currently possesses it. As The Times reported, that family — whom Schmidt believes are likely related to the soldier who took the painting — made an offer to return the painting for compensation last year. The Italian press reported the sum the family requested as being 500,000 Euros. “We’re trying to get the German family to understand that we are not in a legal position to buy something that according to Italian and international law we already own,” Schmidt told The Times.

Schmidt is German, the Uffizi’s first foreign-born leader. But as others in his native country have begun to question the necessity of Germany engaging in public penitence for the Holocaust, Schmidt seems determined to hold his homeland accountable.

“Germany has a moral duty to return the works to our museum and I hope this will be done as soon as possible,” he told The Guardian, “along with every other work of art looted by the Nazi army.”