This ‘Godot’ Uses Yiddish To Speak Up For Refugees 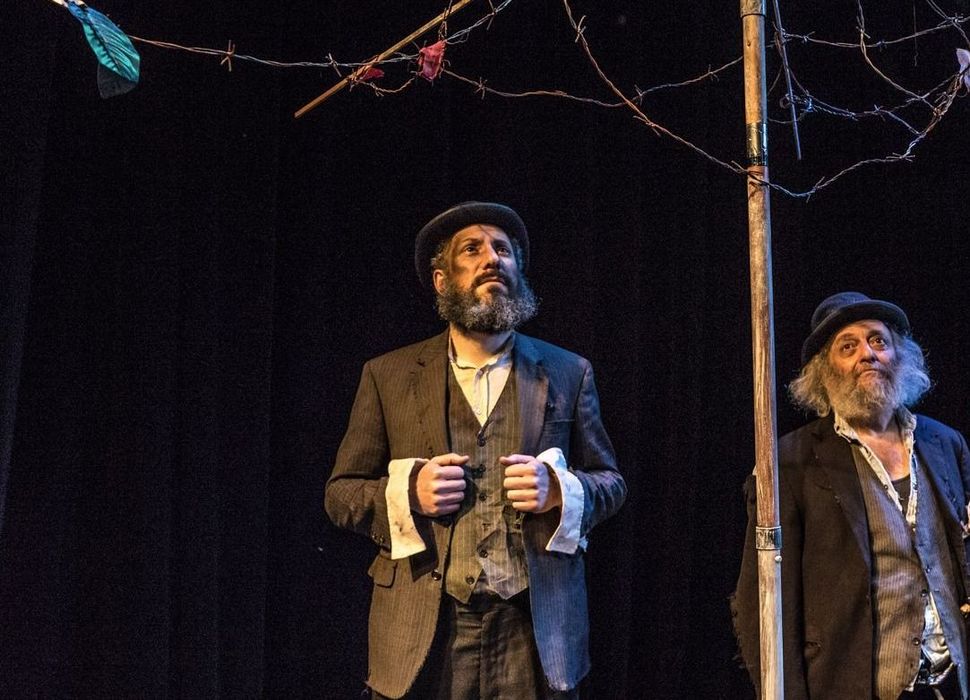 Eli Rosen and David Mandelbaum as Vladimir and Estragon in “Vartn Af Godot.” Image by Courtesy of Kampfire PR

“Waiting For Godot,” the play that launched Samuel Beckett’s theatrical career and the era of the Theater of the Absurd, has a long polyglot history.

Composed by an Irishman in French in 1948 and 1949, (Beckett had spent the Second World War in France as a member of the Resistance), the play first premiered in Paris in 1953 before being translated to his native English. In 2013, 60 years after “Godot” first confounded critics, it received a new translation: This time in Yiddish.

David Mandelbaum, Artistic Director of the New Yiddish Rep, commissioned translator and actor Shane Baker to render the text — in which Vladimir and Estragon, two bowler-wearing old men, kibbitz and bicker during their interminable wait — into the mameloshn. The endeavor worked, receiving the blessing of the notoriously persnickety Beckett estate and playing well to crowds in the playwright’s native Ireland. Now, six years later, New Yiddish Rep’s “Godot” (“Vartn Af Godot”) is back with an urgent message.

“It’s a timely remounting of the play,” Mandelbaum, who is reprising his role as Estragon in the production, told the Forward in a phone interview. “The political climate, not only here in this country, but globally, I think makes it the right time to bring back a play that I think is essentially about refugees and the plight of refugees, prisoners, people often referred to as ‘The Other.’”

“We see every day the news of people being stopped at the border, held in camps, not let in, children dying in custody. It doesn’t seem to be getting better; it just seems to echo stronger in our DNA of the Holocaust survivor generation,” said Muszkatblit , the artistic director of LABA: A Laboratory for Jewish Culture and arts and culture director at the 14th Street Y. She also mentioned environmental concerns, such as plastic in the ocean, informed her vision for the production.

Beckett was famously tight-lipped about the meaning of his plays, despite near constant pestering by theater makers and critics eager to confirm the “Godot” of the title was the Christian God. When pressed, he would direct his interrogators to the original French, in which Godot’s nearest linguistic cousin was a slang term for boot. (Naturally the Yiddish production resists a Christian gloss, bracketing the word “savior” when referring to Christ in its supertitles). But given what we know of the play’s content and context, written in the shadow of the second world war and the atom bomb and peppered with allusions to charnel houses and persecution, Mandelbaum and Muszkatblit’s read is as valid as any. The only problem then is how to communicate it without ruffling a literary estate famously opposed to alternative settings.

“Beckett is very specific about the way you can recreate the play but within that we have the freedom of choosing the floor, the sound,” said Muszkatblit “The sound and design can spark little memories that can connect to an audience seeing it right now. Hopefully it will ignite a bigger conversation.”

Walking into the theater at the 14th Street Y, the audience is met with a preshow sound scape of rolling tides, children crying and the requisite klezmer clarinet. If we are on a country road, as Beckett writes, one senses we reached it by sea. The cry of the child, pulled by sound designer Moshe Lobel from documentary footage of refugee families, brings to mind the leaked audio of detention centers near the border. Approaching the stage the audience sees the traditional elements of the play’s minimalist set — a low mound and a tree — are both present. Only this time set and costume designer George Xenos has made the mound from sandbags and bright orange life vests, along with the odd water bottle and a burst soccer ball. The tree? A skeletal deck umbrella stripped of its canvas and garlanded with barbed wire. The floor is painted to look like an oil slick.

With these small choices Vladimir (played by Eli Rosen) and Estragon, despite their démodé suits may well be asylum seekers from a future or current environmental or political chaos. Suddenly their situation — being strangers to the land (“Not from these parts” as Estragon says) and their ignorance of their would-be contact (“Wouldn’t even know him if I saw him” quoth Estragon) — seems clearer. This Godot could be their coyote, arriving to smuggle them in to brighter future in a new country.

The fact that the production takes place in Yiddish, a language that has seen its share of tragedy and displacement, helps deliver the point. And it feels, unlike poor Go Go’s too tight boot, like a natural fit.

“The banter between the characters is so Yidishlekh, so reminiscent of the back and forth that one encounters in Yiddish just in a very natural, everyday way,” Mandelbaum said. “The dialogue of the play is so steeped in that zest of the Yiddish soul and the Yiddish view of humor and tragedy.”

“It’s the language of waiting and complaining,” Muszkatblit added. “And it’s so musical.”

This tuneful quality is immediately apparent in performance. Maybe the most challenging part of Beckett’s play is a whopping 729 word speech by the otherwise mute character of Lucky. The monologue is a linguistic maelstrom of pseudo-Academic and theological nonsense that, in English, achieves a kind of plosive-packed poetry. In Yiddish, as delivered beautifully and manically by Richard Saudek, it becomes a haunting uvular aria – an elegy or paean to a world gone mad.

Yiddish, with its unique signifiers and ethnically limited speakership, would appear to add a degree of specificity to Estragon and Vladimir’s plight. The 2013 production strived for this effect, hinting that Estragon and Vladimir were Holocaust survivors until Beckett’s protectors vetoed the decision. This time Mandelbaum hopes the interpretation will allow Jewish audiences to be more inclusive with their associations, using the language to make connections to contemporary humanitarian catastrophes.

“One of the prevalent trends today is for us as Jews to have a proprietary outlook on the word ‘Holocaust,’” Mandelbaum said. “One of the things I hope people take away from this production is the fact that that is not so. We are witnessing Holocausts daily and we have to understand that we are not the only other.”

This ‘Godot’ Uses Yiddish To Speak Up For Refugees