The Luck of the Yiddish: ‘Godot’ At First Irish NYC Theater Fest 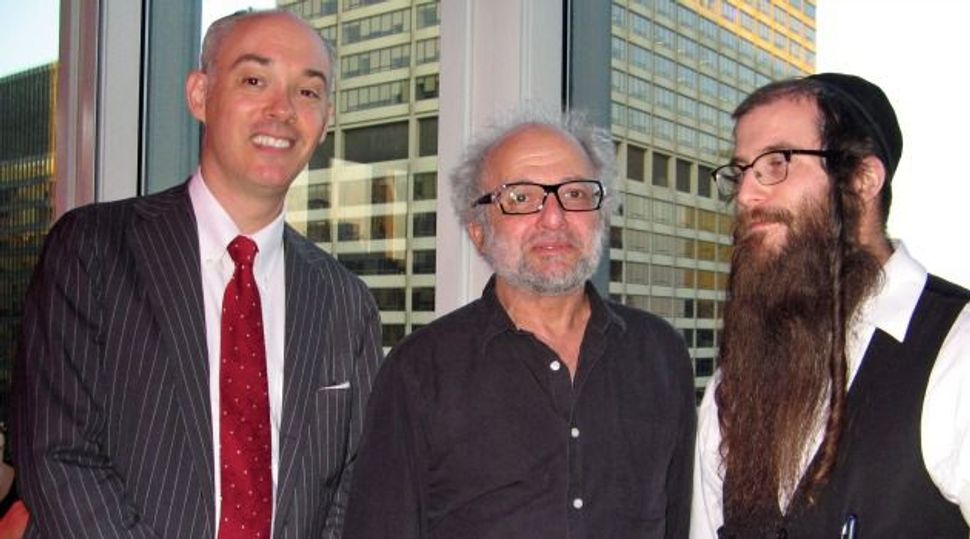 I asked in Yiddish: “Vos epes. farvos zaynd ir do?” (“Why are you here?”) Both answered me with a Yiddish-style shrug.

In its seven-year history, Origin — the world’s only all Irish theatre festival —  has presented works by 100 Irish writers and this year — an historic Yiddish production of “Waiting for Godot.”

While Yiddish Godot director Moshe Yassur and cast member David Mandelbaum mingled with guests enjoying a fabulous buffet table, an excited Shane Baker was besieged by admirers and ecstatic about its inclusion as “a new play” in the competition of the Northern Ireland 2014 Origins First Irish Festival in Dublin.

Shane — who translated Godot into Yiddish and starred in its original run in New York City last year — as well as in its current production in New York — beamed: “They gave us the theater at the Portora School (founded in 1608 by James I of England) where Beckett and Oscar Wilde had gone to school! The first night there were eight people. The second—seventeen. On Saturday, the house was full. We had ten performances—more than any other show [in the festival] . We had seats in the hall!” Among the theatergoers, Beckett’s nephew Edward Beckett.

At “Godot’s” return to New York as part of the Festival, there have been post-performance panel discussions with, among others, Yiddish theater maven and author Nahma Sandrow and, as I was told, one lady confessing “This is my third time seeing it!.”

As for Yoel and Avram — never got a clear answer as to why they were there — but ever smiling, they were the darlings of the photo corps posing with all the principals and guests.

You can still relish the amazing Yiddish “Godot” experience at the Barrow Street Theatre (212) 868-444 September 18, 19 and 20th at 7:30 with a final performance on September 21 at 2 p.m. For the Yiddish challenged there are superb super titles…. and oh, such tam!

The Luck of the Yiddish: ‘Godot’ At First Irish NYC Theater Fest