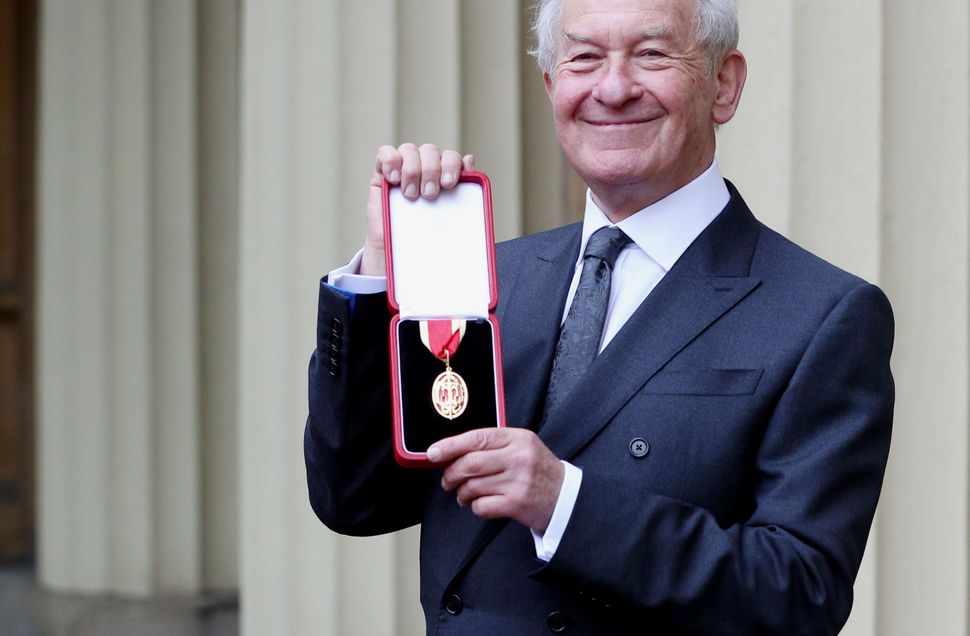 Historian and broadcaster Sir Simon Schama poses after he was awarded a Knighthood. Image by Getty Images/JONATHAN BRADY/Contributor

That’s Sir Simon Schama to you.

On February 5 Prince William, the Duke of Cambridge, knighted Schama, the 73-year-old historian and Columbia University professor, for his contribution to history, the Western Telegraph reports.

Schama is the author of books on the history of art, France, England, the Netherlands and the American Revolutionary War. In 2013 he published the first in his three-part series, “The Story of the Jews,” the final volume of which is forthcoming.

In England Schama is well known for his TV documentaries for the BBC which, beginning with “The Power of Art” (2006), were broadcast across the pond on PBS and released alongside full-length companion books.

In a speech following the ceremony, Schama expressed his concerns with Britain’s current trajectory.

“We’re going through a very awful period which could conceivably put huge strain on the United Kingdom, particularly on Scotland,” Schama told London’s Press Association. “I do hope in a hundred years this won’t be seen as the moment when it all broke apart.”

Schama, a critic of Brexit, hoped to see a lessening of political divisions and a greater emphasis on economic growth and multiculturalism in the United Kingdom’s future.

“If you take as the revelatory moment the Olympic games just seven years ago: we had a flourishing economy, we were a light to the world. We had gold medallists in every religion and skin color,” Schama said. “Odd moments of dysfunction or manufactured political rhetoric can undo that… This moment will be a test of those two versions of Britain: the Olympic Britain or Brexit Britain.”

In November 2017 Schama, who lives in New York’s Westchester County, voiced public criticism of the culture of Jeremy Corbin’s Labour Party, of which he is a supporter. In a letter published in The Times, co-authored by fellow historian Simon Sebag Montefiore and journalist and novelist Howard Jacobson, he wrote that anti-Semitism “under the cloak of so-called anti-Zionism” had infiltrated the party and that “Labour leadership’s reaction has been derisory.”

His reaction to his knighthood? Schama simply called it “amazing.”