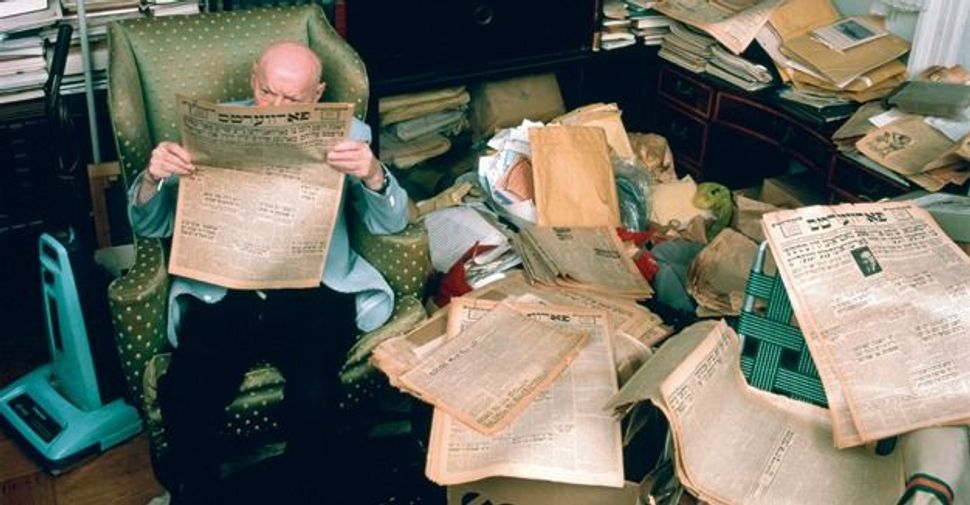 “I can say I have achieved one thing in my life,” said Isaac Bashevis Singer. “My chaos has reached perfection!”

This is what Bashevis Singer declared whenever we went into the back room of his Upper West Side apartment, which was filled with Forverts newspapers dating back to 1940. They were piled over old trunks and amid yellowed Con Edison bills and hangers jammed with ties. The piles rippled toward the window, which overlooked a courtyard, and through closets filled with derbies and pin-stripped suits, outfits that reminded me of Dick Tracy or Clark Kent.

In the late 1980s I decided to read through the papers Bashevis Singer had kept and see what hidden gems had not been translated. He had a long-running column entitled “Mentshn Oyf Mayn Veg” (“People Along My Way”), in which he described individuals from Bilgoray and Warsaw whom he met during his youth in Poland. The brief, poignant portraits stood on their own. And they were memorable, especially those like that of Kalmen Glezer, a giant who marries a girl with a disability. After she died, he pined for her so much he eventually died by suicide.

Of those columns, I particularly liked “Reb Israel and his Daughter Glike,” which described a bitter struggle between the legendary Rabbi Jacob Emden and a simple Jew, Reb Israel. Rabbi Emden, a scholar and bitter critic of the 17th-century false messiah, Sabbatai Zevi, has many adversaries, including Reb Israel, who is believed to be a Sabbatai-Zevinick himself. On creased paper with a small quill pen, Reb Israel wrote passionate letters to Rabbi Emden, defending the false messiah. His daughter, Glike, was kept hidden away in Reb Israel’s little house.

Then young Bashevis Singer, a boy of seven or eight, fell in love with Glike. She asked him playfully if he wanted to marry her, but Bashevis Singer, being young and frightened says, “No I am a Sochid.” (He meant to say: “I am a Hasid.”) Years later, Bashevis Singer saw a woman on a bus in Buenos Aires whom he believed was Glike. They exchanged knowing glances. “A secret hovered on this bus and wove itself over the gray walls,” Bashevis Singer wrote.

I suggested that we translate some of these stories. “Yes, it’s living history!” he exclaimed. “Let’s absolutely publish this book.”

In his strong accent, Bashevis Singer called the Forverts “my vhip.” (He meant, of course, “whip.”) “Vitout this vhip, I could not have written a thing,” he would say. “Vitout this obligation I vould never have become a writer at all.”

Whenever he was ready to submit an article or chapter of a story, he would pick up any envelope available and write the name of the editor at the time, Shimon Weber, on the front. Then he would tear the pages of his handwritten manuscript out of the small, soft-cover notebook in which he wrote and roll the papers up like a tube. He then stuffed the pages into the envelope in any way possible. If he was able to actually seal the envelope, it was a miracle. If not, he would pull the top down and clamp it with a large metal clip.

Sometimes he would run out the door to find a mailbox on Broadway, and sometimes he took a taxi to the Forverts office to hand-deliver the manuscript. When I went with him to mail pages, we would often meet a one-armed Yiddishist storekeeper whose shop was near the mailbox. Upon seeing Bashevis Singer, the shopkeeper would lift his good arm and recite a Yiddish poem, just as if he were performing in a Shakespearean drama.

Frequently, someone would stop Bashevis Singer on the street to point out a mistake or exaggeration in a recent installment of his novel, which was being serialized in the Forverts. People often complained about the fact that he wrote about Yiddish-speaking whores or Yiddish-speaking thieves. Bashevis Singer would answer them: “Vould you rather I write about Spanish whores and Spanish thieves?”

The Forverts provided him with a public platform that extended beyond fiction. For many years, he wrote articles about human behavior, using the pseudonym D. Segal. Among the headlines: “Two Names and a Double Life,” “When and Why Rabbi Gershom’s Anti-Polygamy Act Was Enacted,” “Why Many People Like to Gossip About Their Best Friends.”

“I was ashamed of these pieces, but I had to make a living,” Bashevis Singer would say.

And for years, he wrote an advice column. He said it began with people writing in about “my daughter or son,” and then it became “granddaughter” or “grandson,” and finally it read, “my great-granddaughter, my great-grandson.” And all the letters from his fans were piled up in this same “chaos room,” as he called it, as his old copies of the Forverts. “Not one letter or installment was ever thrown out,” he would boast.

The newspapers would often crumble between my fingertips. When this happened, Bashevis Singer would cry out: “Be careful! These newspapers are like spidervebs!” He sat every day, all summer long, in the sweltering heat, with his head hidden behind these “spidervebs” and only the tips of his fingers showing. “This vone vee shall see,” he would call out. Or “This vone is no good, I tell you, put it avay,” or “this von vee can patchke with…”

He never tired of reading and re-reading his manuscripts. “Vee vill polish it until it vill shine” was his motto. Bashevis Singer worked at the Forverts over 60 years. “In this country, all we keep hearing about is a ‘sick day.’ Everyone is eager to take a sick day,” he would say. “Who has ever heard of such a thing as a sick day? In my opinion, a human being must vork! An ox must vork!”

When he wrote for the Forverts Bashevis Singer knew he was speaking to his people. And he knew they had complaints. He once made a mistake with the Hebrew date of [Rosh Hashanah](https://forward.com/schmooze/320610/rosh-hashana/ “Rosh Hashanah”), and letters of protest came in by the sackful. Each letter began, he said, the same way: “A man like you, with a rabbinic background, can make a mistake such as this, a shande — a disgrace!”

But Bashevis Singer was comforted by his readers. “They nudge me; of course, they nudge me, but who else will nudge me?” he said. It was a blessing for him to know that he had a built-in, dedicated audience. His readers knew his language intimately, they knew his cultural and religious references. Although each one had an opinion, he was speaking to each and every one of them.

In his letters to his fans and to his readers he often said, “When I will come to the oylem ha-emes (“the World To Come”), the first thing I will ask the Almighty is: ‘Where are my good readers?’ I would like to spend all of eternity with them.”