Scenes From The Forverts: When Hasidic Proofreaders And Secular Editors Went Head-To-Head 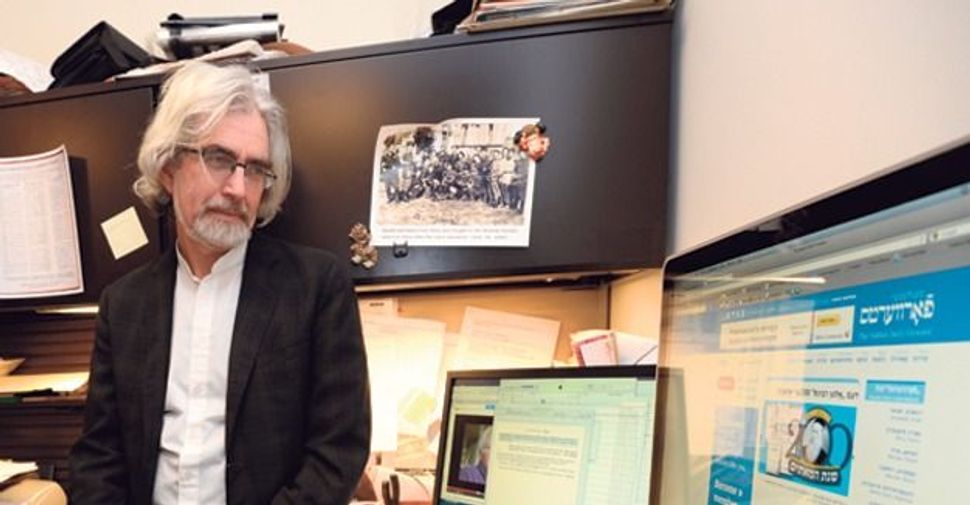 Itzik Gottesman at the Forverts offices, 2013 Image by Getty Images

By the time I began working at the Forverts as an associate editor under Boris Sandler, I had missed out on the paper’s venerable traditions of Yiddish typesetting and printing. The year was 2000, and the computer age had already taken hold.

But hidden in the corners of the composing room where the typesetters worked, one could still find a few relics of a bygone era. A device that looked like a ticker tape or telegraph machine was still there, a reminder that for a century, the Forverts had been the main source of news for hundreds of thousands of readers. In another corner stood a table with a lamp that had once been used to illuminate the pages during the layout process, which was painstakingly carried out using scissors and glue.

The Forverts left its iconic building on East Broadway 30 years before I arrived; by the time I joined the paper, it was located in the former headquarters of Harper & Row, one block from the Empire State Building. Even so, I remembered the East Broadway building well, because it had also housed the Folksbiene Theater. In the 1960s my family and I had attended the troupe’s Yiddish plays every year year; our after-theater discussions took place at the Garden cafeteria on the corner, a longtime gathering-spot for Forverts journalists and Yiddish writers, including Isaac Bashevis Singer.

Among my duties at the paper was compiling the column “Letters from Readers,” which always appeared on the second-to-last page, together with obituary notices and paid advertisements. A number of readers would call me each year to place a yortsayt ad for their departed loved ones. We would use the same text for the ad that we used the previous year, only changing the number of years that had passed. So in the phrase, “For the third yortsayt of my beloved wife/husband,” we would just change the word “third” to “fourth”.

The actress Mina Bern was among those who called each year to place a yortsayt announcement for her husband, the actor and singer Ben Bonus. She would simply change the number in the caption under his photograph so that “three years alone” would become “four years alone.” But one year we goofed: We remembered to change the number of the yortsayt but not the number in the caption. So underneath the bold lettering, which read “In memory of Ben Bonus’s fifth yortsayt,” the caption declared “Four years alone.” The day the newspaper came out Bern called me up, laughing, and cried: “Itzik, alevay volt dos geven emes!” [“Itzik, if only that were true!”]

Another memorable moment for me was when an elderly reader called to place an obituary. I asked him whom it was for, and he replied “For myself.” He explained that his children were estranged from the Yiddish world, so it would never occur to them to place an ad about his passing in the Yiddish press. I convinced him that this was not the Jewish way and wished him many healthy years ahead.

Over the years I noticed that the number of letters by readers dropped off considerably. When I first arrived, I still received long, handwritten letters that displayed a gift for writing. They were often memoirs of the reader’s life in Eastern Europe or his or her experiences during the Holocaust. But later the letters dwindled to almost nothing, and the column was eliminated, another sign that the old generation was passing.

At the Forverts, secular Jews worked alongside Hasidim, doing the typesetting, proofreading and layout. One typesetter, who had been there for at least 30 years, was a Gerer Hasid. By coincidence, I bought a tallis for my daughter’s bat mitzvah at a Gerer store in Boro Park, and I mentioned my co-worker’s name. They knew him quite well but not one of them knew where he worked. He probably told no one, lest he harm his children’s yikhes when finding them a match.

Our proofreader, Yehoshua Dubrovsky, was a traditional Lubavitcher Hasid, the “real deal,” as we say: He was born and raised in Belarus before the Holocaust. We got along fine and he was good-natured and soft-spoken but occasionally our disparate viewpoints became starkly apparent. After one writer submitted an article about Jesus, Dubrovsky called me into this office to explain that Jews don’t refer to him as Jesus but as “that man”. I put my foot down and reminded him that this was not a religious paper, so the name Jesus stays as is.

Dubrovsky began working at the Forverts after receiving permission from his rabbi and ended up staying for many years, first as a typesetter and then as a proofreader. As a result, he knew the older traditions of the secular Forverts better than many secular editors did. For example, when writing English names in Yiddish, he would match them letter by letter, so Connecticut, for instance, would be written Konektikut, even though the “c” is not pronounced. Other editors protested, but I always preferred Dubrovsky’s method, because it let you easily recognize what it was in English.

Whenever I gave lectures about the Forverts and about Jewish folklore — whether in Milwaukee, Chicago or Los Angeles — someone from the audience would inevitably approach me and tell me what a yontif, what a joy, it was when the paper was delivered to their home. With the end of the printed Yiddish Forverts last month, an important chapter in American Jewish cultural history has come to a close.

Scenes From The Forverts: When Hasidic Proofreaders And Secular Editors Went Head-To-Head