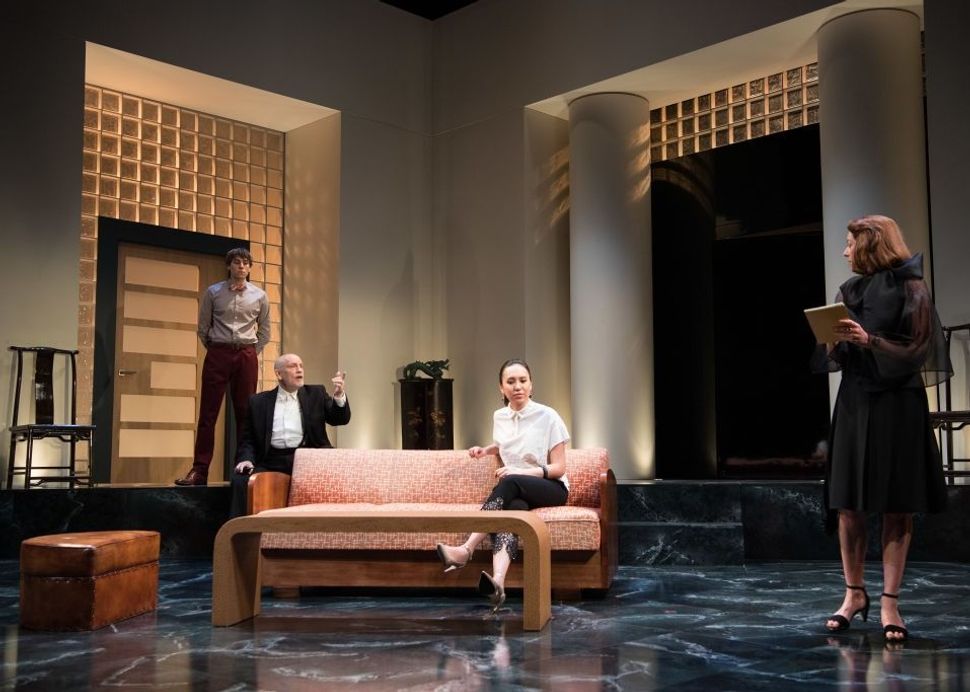 In January, we reported with all due chagrin that David Mamet was premiering a play based on Harvey Weinstein on London’s West End. That play, “Bitter Wheat,” opened June 19 and early reviews have us even more confused — not about the play’s quality, but about its baseline reason for existing.

In the production, John Malkovich plays the fictional movie producer Barney Fein, a predictably transparent Harvey Weinstein analogue. None of this is surprising, but some of what is reportedly emphasized in Malkovich’s portrayal — namely the Miramax founder’s weight and religious and party affiliation — is, while also not much of a revelation, disappointing.

“Harvey Weinstein is fat, mean, and Jewish, no one ever put those attributes in question,” Vanity Fair’s Ben Croll writes in his review. “But no one really considered them to be Weinstein’s most salient qualities either — no one, it seems, except for David Mamet.”

Malkovich of course is pretty svelte, so he’s been put in a fat suit for the role. Mamet, who also directed the production, “makes many dispiriting attempts to wring laughs out of the fact that this character is overweight, as if that’s the key to taking down a Weinstein,” writes Holly Williams of TimeOut London.

The plot of “Bitter Wheat” is reportedly predictable at the outset, with Fein yelling at a screenwriter who wants to report him to the WGA for lack of payment — “The writers’ guild would drink a beaker of my mucus if I asked them to” — and later proposing projects to Yung Kim Li, a young English actress of Korean descent, that include, per The Guardian, “roles in a Korean Gone With the Wind or a gay version of Anne Frank.” Fein also tells the actress, played by Ioanna Kimbook, that unless she watches him pleasure himself in the shower he’ll cancel the release of a completed project, “Bitter Wheat.”

As David Lister of The Independent writes, “As he makes his outrageous, sexual demands, Fein adds: ‘I don’t think you understand how much money I gave to the Democratic Party.’”

Here’s where things get weird. In Act II Fein lands in a jail cell for his attempted assault of Li, but, by all accounts, the play does not then become a meditation on the consequences of his actions. Instead, it takes an offramp into the refugee crisis and international anti-Semitism.

“We witness the downfall of the self-pitying, still self-aggrandising Fein — and then comes the revelation that his elderly mother has been gunned down by an illegal Syrian immigrant declaring ‘death to the Jews,’” Williams writes. “Rather than show a shred of sadness, Fein launches into a frantic, contorted defence of immigrants, in what is an unconvincing display of liberalism. Presumably, it’s a plot move designed simply to bait all the right-on liberals in the audience. Politically, it’s tiresome; theatrically, it’s loopy.”

Croll characterizes this subplot and the trappings of the play’s final half as resembling Borscht Belt schtick. Mamet, he writes, seems both oblivious of and indifferent to the wider societal implications of #MeToo.

“This play feels less connected to contemporary culture than your average late-night monologue or middling episode of ‘South Park,’” Croll writes. “The controversy is entirely peripheral to the work itself.”

But it looks like Mamet’s play also fails as a character study.

“The main reason why this play is so ineffectual is that the hero is unrelievedly vicious,” Michael Billington writes in The Guardian. “He simply comes across as a power-addicted predator of bottomless cynicism.”

That, and — of course — someone who has a compulsion about his weight, complaining on his arrest that “the overweight get no sympathy.”

While the reviews do concede that Mamet does not appear to want the audience’s sympathy for Fein or his real world counterpart, they also confirm what one might have suspected all along.

“Turns out, nope, we really didn’t need a Harvey Weinstein play,” Williams writes. Especially not one “written by a man and from a male perspective.”