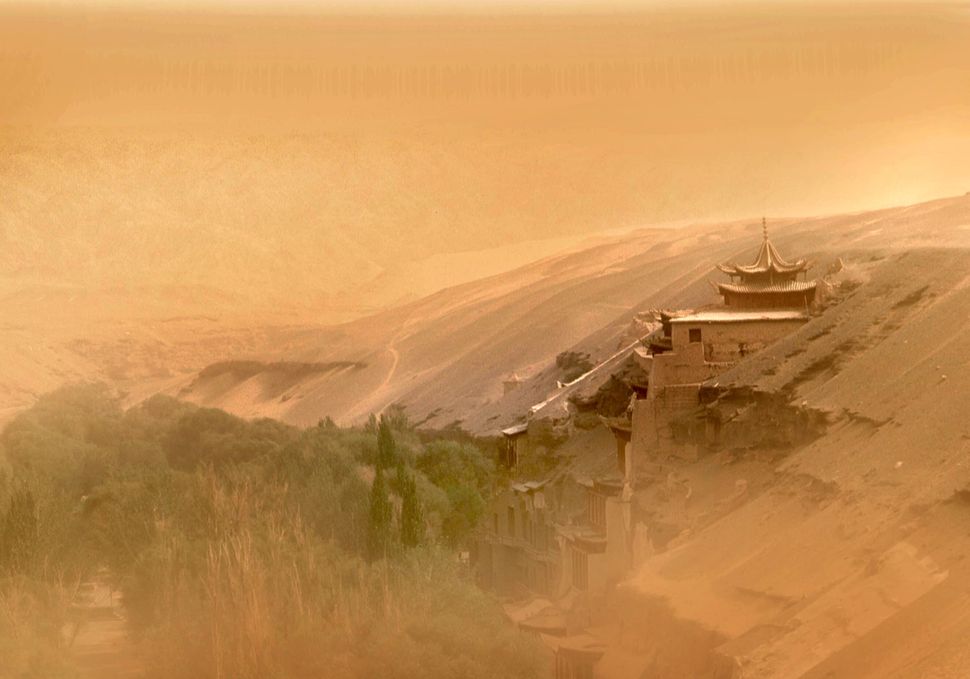 A landscape in Dunhuang, China, featuring the entrance to the Mogao Caves, during an April 1980 dust storm. Image by Thomas Nebbia/Getty Images

Approaching the Mogao Grottoes in Gansu, a province in northwest China, it’s hard to imagine the sights that lie in store.

The holes in the cliff can appear, from a distance, to be nothing more than a strange rock formation etched into the face of a sand-beaten desert ridge. It is only as you get closer that details start to coalesce. What looks like a cluster of natural caves is, in fact, hundreds of temples painstakingly hewn into the stone. Over a millennium after work at the site first begun, the temples at Mogao are famed for their stunningly painted interiors and their rich trove of ancient texts — including, improbably, one from the Jewish world.

In 366, the traveling monk Yuezun was in the dunes near the Gansu town of Dunhuang when he experienced a vision that inspired him to carve a space for worship in the nearby cliffside. Over the years, as the rise of Silk Road trade brought a flow of merchants through Dunhuang, so too did it bring a steady stream of wealth to the monastic community that had sprung up around the cliffs. Yuezun’s solitary carving soon became a nest of elaborate excavated temples complete with elegant sculptures, rich murals and even, in some cases, multiple levels. 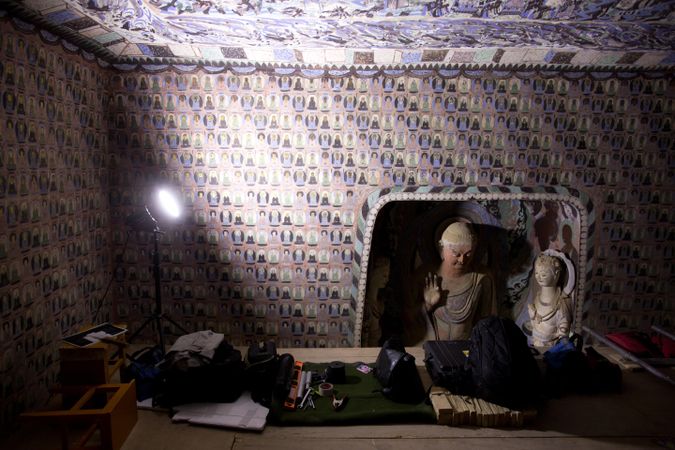 The interior of one of the Mogao Caves in Dunhuang, in China’s Gansu province, photographed on May 13, 2013. Image by ED JONES/Getty Images

Perhaps the most famous of Dunhuang’s caves, however, earned its name not for its artwork but for its massive collection of books. The so-called Library Cave, a small chamber sealed shut for unknown reasons in the 11th century, held tens of thousands of texts when Wang Yuanlu, a Daoist monk who appointed himself caretaker of the temples, rediscovered it in 1900. Despite its moniker, the Library Cave was, in all likelihood, never a place for study or reading; it may instead have served as a repository for old or damaged texts too precious be thrown away, a function similar to the genizah of a synagogue.

Before foreign explorers scattered the contents of the Library Cave in the early 20th century, the small chamber was rich in literary treasures. Among the cave’s most famous erstwhile holdings, for instance, is the oldest dated printed book in the world, a block-printed Chinese copy of the influential Buddhist text known as the “Diamond Sūtra” made in 868 C.E. But the Library Cave was not limited to Chinese-language works. Dunhuang is located along major trade routes connecting East and West, and the collection of documents amassed at the site come from a wide array of languages and cultures: Among others, Tibetan, Sogdian, Uighur, Khotanese, Sanskrit, Tangut and Old Turkic are all represented. Hebrew was just one of the many languages and scripts used by those who passed through the area that ended up preserved in the nearby religious complex.

Compared to the scrolls and codices found elsewhere in the Library Cave, Mogao’s sole surviving Jewish text is diminutive in scale. Its lines are written out in a tidy, angular hand on an oblong scrap of time-darkened, much-creased paper. Fragments of letters at the top and bottom of the page hint at missing pieces of the text. Now held at the Bibliothèque Nationale in Paris, the text is a selichah, or prayer for forgiveness, that dates to the eighth century and includes quotations from the Prophets and the Psalms. But the Mogao selichah is not the only piece of textual evidence for Jewish presence in the region; a collection of fragments have been found at other sites along the eastern Silk Road as well. These texts are in Judaeo-Persian, a cluster of Iranian Jewish dialects written using the Hebrew script. Taken collectively, this body of Jewish texts provides a window into Jewish trade networks of the ancient world. 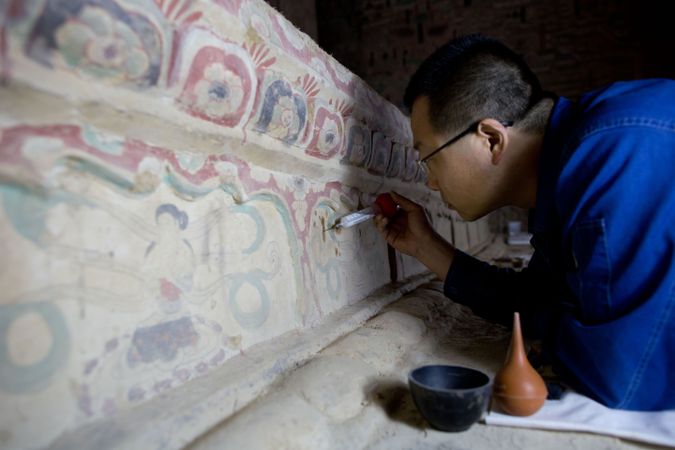 Restoration of the Mogao Caves, May 13, 2013. Image by Ed Jones/Getty Images

The presence of Jews and Jewish texts in Asia should come as no shock, as Jewish trade relationships with Asia date back centuries. For instance, Maimonides’s brother, a jewel merchant, perished on a voyage to India that he made against the explicit advice of his brother, an exchange movingly preserved amongst the letters found in the Cairo Genizah.

Though the exact time of the first Jews’ arrival in China is debated, the earliest surviving written record testifying to a Jewish presence in the country dates to the Tang Dynasty (approximately 618-907 C.E.). That document, a letter in Judaeo-Persian in which a merchant asks for help getting rid of bad sheep he’d been duped into buying, came from Dandan Uiliq, a site on the former Silk Road. Jews in China are mentioned by medieval Islamic writers such as Ibn Battuta (1304-1369) and Abu Zayd al-Sirafi (1332-1406). Even Marco Polo (1254-1324) mentions them in his account of his Chinese travels.

A small group of Jews in Kaifeng, probably the most well-known of China’s historic Jewish communities, remains extant; most other such communities have died out.

Today, the scattered collection of texts once housed in the Library Cave is being catalogued by the International Dunhuang Project. In addition to supporting the physical conservation of works found along the eastern Silk Road, the IDP also promotes those works’ accessibility through the creation of an online database that aims to unite the scattered fragments under one (digital) roof. Searching the IDP’s database allows one to place the Mogao selichah within a larger context of other Jewish texts found in western Chinese archaeological sites, such as the aforementioned letter about sheep (now housed at the British Library) and another letter from Khotan now held in the National Library of China that some researchers that some researchers say is connected to the British Library fragment. Viewed together like this, the Mogao prayer, humble though it may be, nevertheless bears eloquent testimony to the interconnectedness of the ancient world.