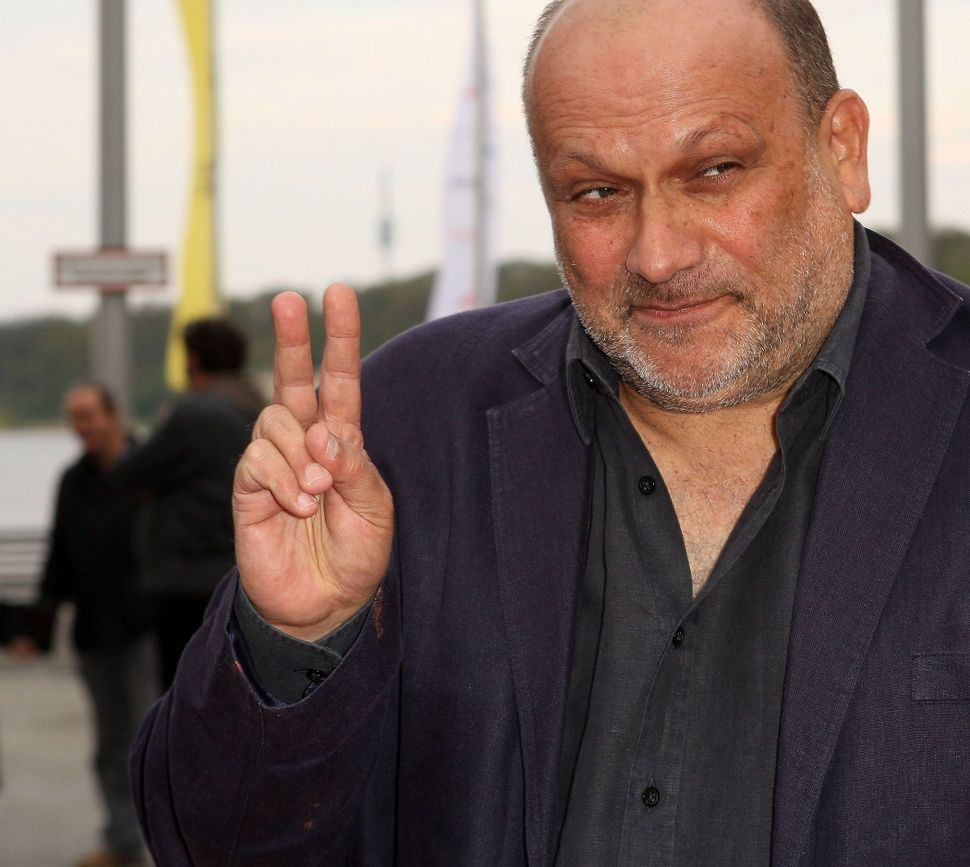 In the Israeli filmmaker Eran Riklis’s new spy thriller “Spider in the Web,” Sir Ben Kingsley plays a world-weary Mossad agent. This, after playing Adolf Eichmann in “Operation Finale” (2018) and a member of the Israeli intelligence community in the recent Netflix release “The Red Sea Diving Resort.”

Like Kinglsey, Riklis is in familiar territory with “Spider,” released August 30. The film in large part shares the buddy-thriller formula of his 2017 film “Shelter.” The film follows Avram Aderath (Kingsley) and a young operative, Daniel (Itay Teran), his former Mossad colleague’s son, as they travel through Belgium seeking proof of an alluring contact’s (Monica Bellucci) connection to a company selling chemical weapons to Syria. Aderath, who lives undercover as an antique dealer in Antwerp, has been fudging intelligence for years as a way to stay relevant. For once, he knows he has a real lead — but can he produce a smoking gun?

The Forward’s PJ Grisar spoke with Riklis over the phone. The following interview has been condensed and edited for clarity.

PJ Grisar: The film claims to be based on true events. Can you tell me what those were?

Eran Riklis: Well, I would say it’s inspired by true events. It’s inspired by many stories that both my writers [Gidon Maron and Emmanuel Naccache] came across over the years. When you’re dealing with an aging agent, in this case a Mossad agent, there’s always this question of “What is truth and what is deception.” Secrets and lies always cover these kind of characters, and in that sense, they always tend to get into trouble, but they also have very clever ways of coming out of it — with scars maybe — but moving on until something horrible happens. I think that’s the life of living undercover, living within a different character, which is the case of Avram Aderath. He’s the kind of guy who spent all his life being somebody else. As he says in the movie “When I take off my mask, I’m not sure what I’m going to discover there.” Time and again I’ve encountered people who’ve lived this kind of life.

Aderath seems to be a very Kingsleyan character. Was the part written with him in mind?

It [wasn’t], but when I first went to meet him, I rode on a train from London to some village in the north country [in England] and I was picked up by a driver. I thought, “This is my last journey, because if this were a thriller, they’re probably going to chop my body up and throw it somewhere.” I finally came to his house and I met him. The strongest notion that I had, and it did not leave me, was that I’m actually sitting with my character — not with Ben Kingsley. It immediately became his role.

How did you decide to set the film in Belgium?

This film was always about Europe, it was always about this agent who has been undercover for so many years somewhere in Europe. We wrote it for Paris. Then at some point we had mundane financial issues, and suddenly Belgium came across. I thought “Ok, I’ll shoot the scenes in Germany in Belgium.” After two weeks in Antwerp — it’s a very offbeat city, not the kind of place you go to when you visit Europe, and I fell in love with it. And then I discovered with some research that Belgium is actually a hub of spies and is really the center of Europe in a way.

What about the decision to film mostly in English, rather than Hebrew?

I think the name of the game these days is being authentic. So essentially, I created the character of Kingsley as British, the son of an Iraqi Jew who immigrated to England — and not to Israel — back in the late ‘40s, and that justifies the fact that he speaks English and not Hebrew. But when Itzik speaks to an Israeli agent, he speaks Hebrew. We live in an age where we see on Netflix all these shows in their original languages, and then we see “Chernobyl” and suddenly all these Ukrainian guys are speaking English. There are no rules anymore in that sense. You have to believe your characters. I think being a director is about adapting, no matter where I am.

This film and “Shelter” are a return to your roots in thrillers, like your first feature “On a Clear Day You Can See Damascus” (1984). How does it feel to be back directing something of this scale after spending some time directing smaller dramas?

At some point early on I decided I’m living in Israel, mostly, and I’m part of the Middle East, and I want to make movies that relate to this region — showing real life and real people. That’s why I filmed “The Syrian Bride” or “The Lemon Tree.” But when I made “Shelter” a couple of years ago I realized that making a thriller forces you to deal with a kind of story where there’s not many escape routes, in the sense that you can’t rely totally on atmosphere. You can obscure human nature, but you really have to keep exploring the mystery or the big secret everyone’s chasing.