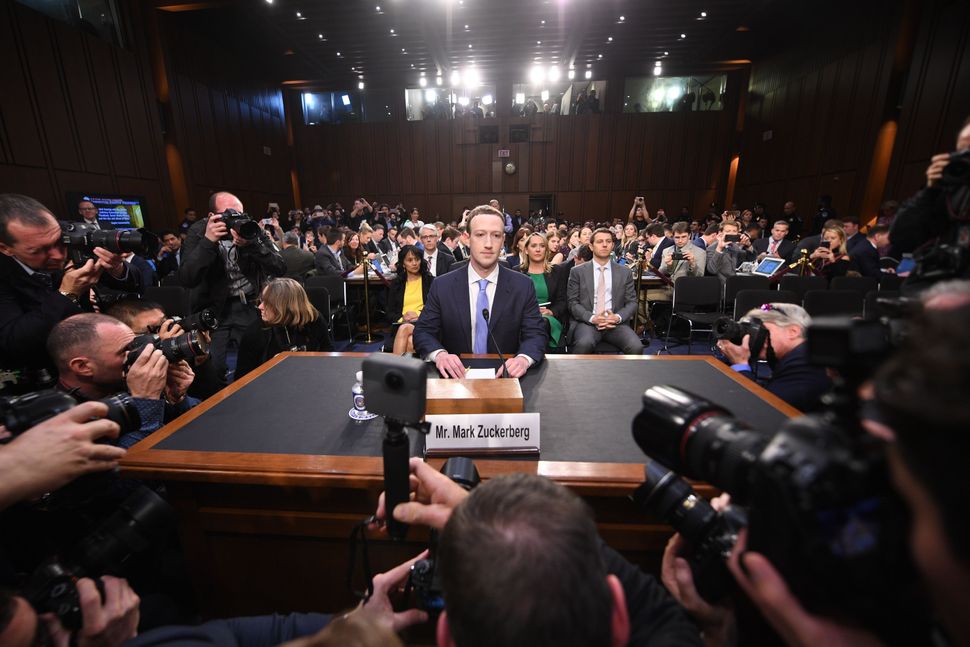 Mark Zuckerberg testifies before the Senate. Image by Getty/JIM WATSON/Contributor

Screenwriter and playwright Aaron Sorkin has written for politicians, presidents, news anchors, colonels — all, for the most part, fictional. But Sorkin did have a rare real subject in his 2010 film “The Social Network,” gifting Facebook CEO Mark Zuckerberg with some of the most sardonic and arch lines in the entire Sorkin-verse. Lately, some noticed that the truth was more banal than fiction.

As many on Twitter have remarked, Zuckerberg’s testimony in a hearing before the House’s financial services committee was not to Sorkin’s sophistic standards. There was, to be sure, a sizzling exchange between Zuck, who came to the Capitol to defend his platform’s new cryptocurrency, Libra, and Congresswoman Alexandria Ocasio-Cortez of New York. But Zuck was not the one delivering the zingers.

Here’s how it went down. AOC asked Zuckerberg about Facebook’s past gaffe with the British political consulting firm Cambridge Analytica, saying:

“I think you of all people can appreciate using a person’s past behavior in order to determine, predict, or make decisions about future behavior,” itself a jab at Facebook’s alleged mishandling of people’s data. “Mr. Zuckerberg, what year and month did you personally first become aware of Cambridge Analytica?”

Zuckerberg, with a creased brow, stumbled through his responses, unclear about a particular timeline. AOC didn’t give him any quarter to come up with more specifics, instead hammering him with additional questions about Facebook’s institutional knowledge.

At which point AOC delivered a breathless clause that would be right at home in Sorkin’s run-on, legato dialogue.

“You don’t know? This was the largest data scandal with respect to your company, that had catastrophic impacts on the 2016 election. You don’t know?”

AOC pressed Zuckerberg on Facebook’s policy of political advertising, breezily asking how one might, hypothetically, abuse the platform’s new system, which allows politicians “to pay to spread disinformation in 2020 elections and in the future.”

Zuckerberg gave us this gem of a response: “We have, if-if anyone, including a politician is saying things that can cause — that is calling for violence or could risk imminent physical harm or voter or census suppression, when we roll out the voter suppression policy, um, we will take that content down.”

Zuckerberg, clearly not of the Sorkin school, soon lost track of the questioning, and AOC, obviously up on her “West Wing,” lost her patience and repeated her question, concluding:

Finally, Zuck appeared ready to have his Will McAvoy or President Bartlet moment. Gearing up for a more eloquent response, he took a brave and principled stance, telling the freshman congresswoman from New York:

“I think lying is bad. I think if you were to run an ad that had a lie that would be bad…. That’s different from it being — from it — from — for — in our position, the right thing to do to prevent, uh, your constituents or people in an election from seeing that you had lied.”

AOC was unfazed by this devastating rhetorical flourish:

Yes, AOC. Make him say he ordered the Code Red..

Of course, Zuck dodged. At one point, asked about soirees with far-right figures, he claimed to miss the content of the question completely. No matter, AOC briskly moved on, concluding her grilling with a question about The Daily Caller, a conservative outlet that has frequently published articles from people with ties to white nationalists that is also an official fact-checker for Facebook.

At this point, Zuckerberg swiveled his head away from her, stumped.

Let’s compare this stammering, unprepared Zuckerberg to the Jesse Eisenberg portrayal in “The Social Network” when he is questioned as part of a lawsuit into who created Facebook.

When he’s asked by the lawyer of the Winkelvoss twins, who are suing him, if he misled them, Zuckerberg responds, plainly: “No.”

When pressed with another question, Zuckerberg changes the subject to say “it’s snowing.”

“Do you think I deserve your full attention?” the lawyer, a guy named Gage, asks Zuckerberg, who appears to be bored. Without skipping a beat, Zuckerberg responds:

“I had to swear an oath before we began the deposition phase and I don’t want to get arrested for perjury so I have a legal obligation to say ‘no.’”

Zuckerberg concludes by delivering one of Sorkin’s trademark smart guy monologues, free of hesitations, largely devoid of commas and seemingly sprung from its speaker’s mouth fully-formed.

“I think if your clients want to stand on my shoulders and call themselves tall they have a right to give it a try. But there’s no requirement that I enjoy being here listening to people lie. You have part of my attention — the minimum amount needed. The rest of my attention is back at the offices of Facebook where my employees and I are doing things that no one in this room, including and especially your clients, are intellectually or creatively capable of doing. Did I adequately answer your condescending question?”

A very different tack than that of the real co-founder of Facebook, whom Sorkin admits he hadn’t met before writing the screenplay. Though, at least the two Zucks are consistent on thinking lying’s bad.

Zuckerberg, for his part, said the [only thing the film got right (https://www.theguardian.com/film/2010/oct/20/mark-zuckerberg-the-social-network) about him was his affinity for fleeces.

It’s certainly ironic that some have called AOC’s performance Sorkin-esque, given the writer’s problems writing women and his recent statement advising the congresswoman’s class of lawmakers to “Stop acting like young people.”

No one had any doubts who the adult in the room was on Wednesday.