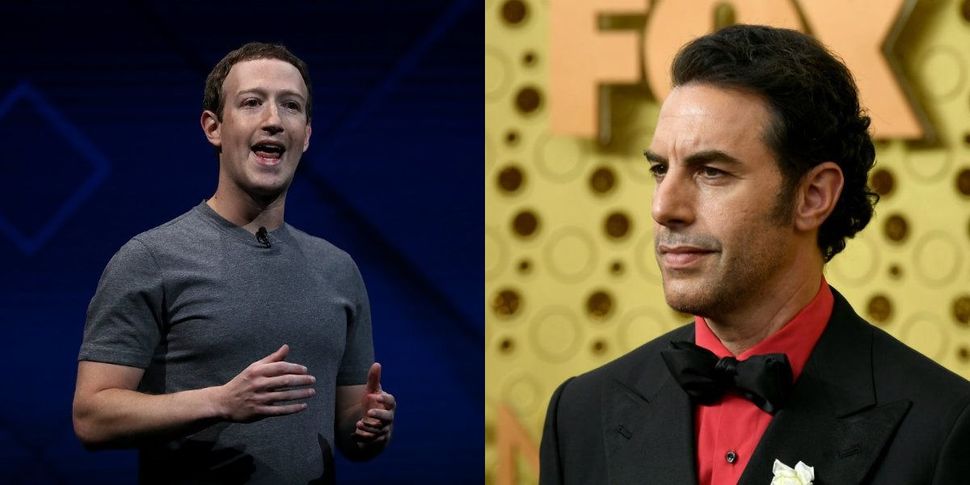 Sure — the Facebook founder’s got 99 problems, and receiving a lecture from “Borat” is just one more. But when two of the world’s favorite bar mitzvah boys have a dispute in the public square about how to fight misinformation, hate, and Nazism, we have to take a look at what’s going on.

Facebook’s new policy, which will allow political ads that contain lies to run on the site, Baron-Cohen wrote, is no different than a restaurant agreeing to serve “goose-stepping” neo-Nazis.

He has every legal right, indeed a moral duty, to tell them to get the f**k out of his restaurant.

“He has every legal right, indeed a moral duty, to tell them to get the f**k out of his restaurant,” Baron Cohen wrote, on the heels of a speech Zuckerberg gave at Georgetown University defending the new policy.

It’s an Ashkenazi throw-down, a kosher beef, and yet another extremely 2019 example of Jews very publicly synthesizing current events through the lens of the Holocaust.

On one side we have Mark Zuckerberg: proud son of Westchester, offspring of two doctors, an AEPI frat boy who rerouted human history by playing with computers.

On the other side we’ve got raven-haired mustache-twirler Sacha Baron Cohen: an Israeli-Brit whose comic stylings have unmasked racists and taught a generation about butt stuff.

One went to Harvard, one to Cambridge. One man had a “Star-Wars”-themed bar mitzvah, the other did Habonim Dror, the Labor Zionist youth group. And for all we know, their ancestors lived one shtetl apart.

Both men have careers that put significant and surprising focus on anti-Semitism and neo-Nazism — exposing it, in Baron Cohen’s case, or managing it on social media, in Zuckerberg’s case.

There’s one big difference between Zuckerberg, who argues that Facebook’s policy bolsters the First Amendment, and Baron Cohen, who argues that Facebook is “a private business and not subject to the First Amendment.” The two men have differing family histories with anti-Semitism — Baron Cohen is the grandson of a Holocaust survivor; Zuckerberg’s family came to the United States from Eastern Europe in the late 19th century, three generations ago.

To be clear, having a direct family connection to the Holocaust is by no means a predictor of a person’s politics. But it’s interesting that two major public figures, who have both spoken openly about the legacy anti-Semitism has had on their families, are grappling publicly over how to respond to the hatred of Jews today. Baron Cohen’s use of the visceral imagery of “goose-stepping” Nazis hunting “Jewish scum” will feel familiar to Jews whose identities have developed in response to the legacy of the Holocaust. But Zuckerberg, who has likewise been extremely public about his Judaism, has been adamant that he will not remove misinformation from Facebook, even when that misinformation is Holocaust denial.

Baby-faced, preternaturally talented, and successful beyond reckoning, Mark Zuckerberg has had the mantle of “Nice Jewish Boy” plunked on him since the moment his consonant-filled name appeared in the mainstream. And Baron Cohen, despite his famous vulgarity, wears the crown of subversive NJB, too — us yentas can see through his anal-antics all the way to his Jewish marriage, his million-dollar donation to Syrian refugees, and his devotion to his grandmother.

The tension between these two high-profile Jews is the same one we’ve seen play out between Jews on the right and the left, at least since Charlottesville. Powerful Jews from Zuckerberg to Jared Kushner, from Baron Cohen to Bernie Sanders, and from Alex Borstein to Gal Gadot, are facing the world and their work — with an eye to the history of Jewish trauma.