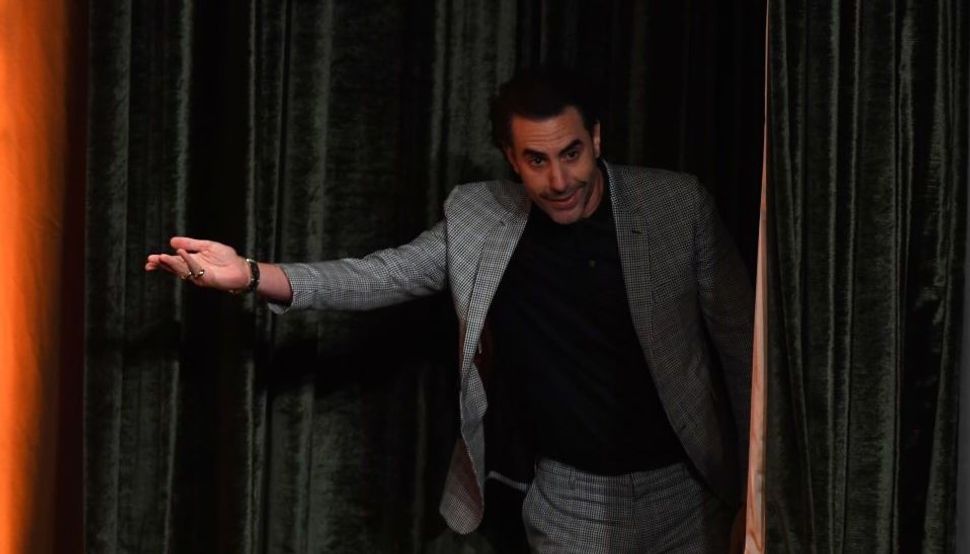 Sacha Baron Cohen, possibly urging his grandmother to avoid the sex scenes in ‘The Spy’ Image by Getty Images

In “Brüno,” Sacha Baron Cohen’s 2009 follow-up to “Borat,” the title character and his boyfriend insert a series of household items into each other’s bodies, including but not limited to — an open champagne bottle, a spewing fire-extinguisher, and a hand-held vacuum.

When Sacha Baron Cohen’s grandmother saw “Brüno” in theaters, she saw none of this.

Baron Cohen, who plays legendary Israeli secret agent Eli Cohen in “The Spy” on Netflix right now, [told the New York Times in an interview that just hours before the mockumentary was to premiere in Los Angeles, he learned that his grandmother would be in the audience. “I called up [the distributors at Universal Pictures] and said: ‘Listen, you have to remove these three scenes from the movie,’” he told the Times.

“What do you mean? We’re screening it tonight! The premiere’s tonight!” Baron Cohen said distributors told him, panicking.

But he insisted. He claims that the scenes were cut, and the thousands who crowded into Grauman’s Chinese Theater in Hollywood watched a version of “Brüno” cut especially for the Baron Cohen family matriarch.

Baron Cohen said he ran into a “Brüno” distributor recently who told him that “the last 12 hours before the “Bruno” premiere were the worst of his life.”