The Most Incredible Stories You Never Heard About Harry Houdini 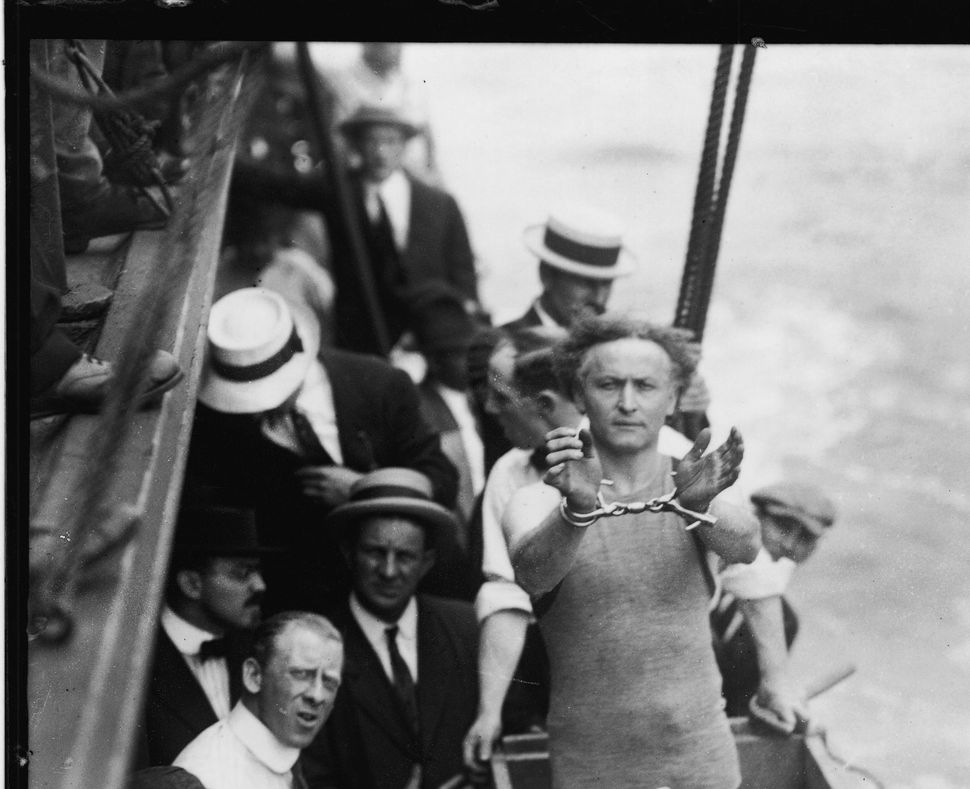 Harry Houdini is the immortal alter ego of the late Hungarian-Jewish immigrant Ehrich Weiss, the son of a rabbi and an incomparable mama’s boy. Many of the marvels of Houdini’s life, due in part to his own self-mythologizing, are, likewise, so much hocus pocus.

“Nobody created myths like him,” Joe Posnanski, the author of the enchanting new book, “The Life and Afterlife of Harry Houdini,” told the Forward. “And he did it so well and with such force that, for one, it took years and years, in many cases decades, to unwind some of those myths. And the second thing is he inspired so many other people to create myths about him.”

But for all the puffed-up mythos surrounding Houdini, there are plenty of historical facts that are really, genuinely fantastic. Here are a few.

While researching his book, Posnanski found that Houdini, Irving Berlin and Al Jolson organized a group called the Rabbis’ Sons Theatrical Benevolent Association to aid the Red Cross and the Young Men’s Hebrew Association during World War I.

“Our purpose is to get all the sons of rabbis who are in the show business together in this organization,” Houdini told The New York Times. “It is surprising how many sons of Jewish clergymen there are on the stage. The Secretary or any other officers will be glad to furnish information on sons of rabbis who want to join.” The secretary was Berlin. Houdini was, naturally, the president.

2. Sarah Bernhardt asked him to regrow her amputated leg

Houdini first met the legendary actress Sarah Bernhardt in 1917, after a New York-based company of actors presented the actress with a bronze statue made in her image. The catch: They expected her to pay for it.

Sensing an opportunity for good press, Houdini bought the statue for her, and later met her. On their first meeting he performed some magic, including his elevated strait jacket escape, which Bernhardt watched from his car. After his tricks, Bernhardt, whose leg was amputated in 1905 due to trauma from a knee injury, is reported to have said, “Houdini won’t you use your power to restore my limb?”

Houdini, at a loss, said it was impossible, and admitted his magic wasn’t real.

“With Houdini, every time you see something you have to find five other sources to make sure it really happened,” Posnanski said. “But the Sarah Bernhardt thing really happened.”

3. He was friends with Arthur Conan Doyle – until Doyle’s wife tried spiritualism out on him

While Arthur Conan Doyle’s signature creation, Sherlock Holmes, was not much for the occult, the author was a true believer. Once, while on vacation in Atlantic City with the Houdinis, Doyle and his wife, Lady Doyle, led a seance. Houdini’s beloved mother, Cecilia, had recently died, and while the escapist was skeptical and even repelled by spiritualism, he obliged his friends by having them try to reach her. Of course, he may have also agreed in the hopes of getting a message through.

“I think his devotion to his mother is as defining a characteristic as we can actually nail — as far as we can point out that it was actually true,” Posnanski said. “He really died a little bit when she died.”

Lady Doyle scrawled 15 hurried pages of automatic writing — the supernatural practice of unconsciously scribbling for a supernatural source — supposedly channeling the late Cecilia Weiss. Houdini, reading the letter, written in English, knew that his German-speaking mother could not have done it and, as a Jew, would certainly not have written the sign of the cross on the pages. The great magician was humiliated by the ruse. The warmness of the friendship between the Doyles and Houdinis cooled that night, and, not long after, Houdini made it his mission to unmask mediums as frauds, believing that their deceit of the bereaved, in his words, “bordered on crime.”

4. He couldn’t say no to a PR stunt challenge, no matter how ridiculous

Magic may have made Houdini rich, but he still faced lean years. In the 1890s, down on his luck, Houdini toyed with opening a magic school and, as part of the endeavor, published a pamphlet called “Magic Made Easy,” which revealed some of his tricks and promised the secret to others for a nominal price. Luckily, no one took him up on the offer and he was forced to improvise, thus inviting the challenges that would make him famous.

To make an early name for himself, Houdini would enter police stations around the world, ask to be handcuffed and, so that no one would suspect him of hiding a key, strip naked before he freed himself. For some reason, police were largely OK with this.

Later, Houdini would welcome challenges to grow his profile and make some money — many of these challenges came from peculiar places. The Hogan Envelope Company challenged Houdini to slip his way out of a giant envelope; chewing gum conglomerate the American Chicle Company bet that the master of escape couldn’t break out of a packing case used to ship their Black Jack gum to troops in France; English suffragettes asked Houdini to extricate himself from bandages and bed linens that tied him to a mattress. He went through with these stunts, escaping from privation by, well, escaping.

While known later known to commission ghostwriters, among them H.P. Lovecraft, the magician was also not above doing his own ghostwriting, planting stories in the news about his early exploits.

“Most of the newspaper articles, especially in the early years, he wrote,” Posnanski said. “Then he had this sort of literary bent, where he wanted to write these stories, and these stories were not getting particularly well-received, so he started hiring incredible writers to write them for him.”

Houdini wrote fiction, like “Bahl Yahn the Strong Man,” a children’s story about a superhuman individual who carried around his paralyzed mother. He also wrote seven books on magic, including “The Unmasking of Robert-Houdini,” in which he exposed his magical namesake.

Houdini even had a monthly column in The Daily Mirror, which he once used to send dispatches about anti-Semitism in the Czar Nicholas II’s empire during his time in Russia. He wrote at length about the government shutting down Moscow’s one synagogue and the czar denying an audience to a Jewish delegation looking to reopen it.

“At the present time,” Houdini wrote after departing from his tour of the country, “the Russian censor is very busy making heavy ink blots on a great many of the newspapers that are sent into Russia, as they have too true an account of what happened in Glischnick, where so many Jews were slaughtered. There is an awful state of affairs in some of the cities, but it has been like this for years.”

6. He gave a film legend his name

While working in the California Medicine Show in 1897, Houdini befriended the vaudevillian couple Joe and Myra Keaton, known for their life-and-limb-risking slapstick routine. The pair had a son, Joseph, who, at the age of a year-and-half, already showed promise emulating his parents’ schtick. The toddler fell down a flight of stairs one day, and, rather than crying or lying still in shock, picked himself off the ground and kept walking. “That was a real buster!” Houdini is reported to have said. The nickname stuck, as did the imperviousness to physical danger, and Buster Keaton was born.

7. Nearly all of his escapes happened behind a curtain

While not the greatest sleight-of-hand magician, Houdini was an ace at escaping from tanks of water, trunks, handcuffs and straitjackets. But through most of his career, his most high-profile stage escapes all occurred out-of-sight.

“He’s doing these handcuff escapes, he’s doing the Water Torture Cell, he’s doing the milk can, his most famous escapes in a box, behind a curtain, so no one can see him do it,” Posnanski said. “That is so astonishing, cause he would often take 10 minutes, 15 minutes, sometimes, with the bigger escapes, an hour or more, and the audience would sit there and look at a curtain and listen to a band play.”

Audiences did not object — quite the contrary, they seemed to love it.

“It speaks specifically to his time and also what had to be amazing showmanship,” Posnanski said. “He had an extraordinary sense of timing, he knew exactly when to come out just when they were about to lose interest.”

8. Houdini’s real death was a lot less dramatic than fabled

“To this day, people are latching on to something we know isn’t true, but putting it to film because it’s so compelling,” Posnanski said.

In dramatizations, Houdini, who died in 1926, sometimes perishes as the result of one of his acts. When Tony Curtis played him in “Houdini” (1953), for instance, he drowned performing his “Chinese Water Torture Cell” trick. When Adrien Brody did his turn as Houdini in a 2014 History Channel miniseries, he died after a fan punched him in the abdomen in his dressing room in Detroit. Neither is true.

While shortly before his death, Houdini was punched by a man during an engagement at the Princess Theater in Montreal, the hits probably didn’t kill him. It’s arguable that the blows may have exacerbated underlying appendicitis, but it was that condition that ultimately ended his life when he stubbornly insisted on performing through it. An emergency surgery, conducted in Detroit, was performed too late.

“He died on Halloween right in the afternoon so that all the newspapers would write it on Halloween,” Posnanski said. “There are those who believe he willed himself to die on Halloween — I don’t know if I believe that, but it’s certainly a big part of his legacy.”

9. He hated spiritualists, but still had a code to communicate with his wife from beyond the grave

While Houdini abhorred spiritualists — see above, regarding Arthur Conan Doyle — he nonetheless prepared for the contingency that he could reach his wife, Bess, from the great beyond. The two contrived a complex code of phrases and numbers, paired to letters that spelled out “Believe.” Bess held seances for a decade after Houdini’s death, finally giving up in the 10th year after he passed. But devotees of the man who could escape anything continue to hold seances each Halloween. One day, hopefuls believe, he may even escape death — but his legend already has.

“This is a poor Jewish immigrant, father can’t get a job as a rabbi, and he invents this character through sheer ambition and hunger and fight,” Posnanski said. “He creates this character who becomes one of the most famous people of his time, but also becomes one of the most famous people of all time. I have tremendous admiration for that. He wasn’t always likeable, he wasn’t always on the level — he told a lot of lies, but, he had this goal and this ambition and it’s outsized and it’s larger than life. And I love that story.”

The Most Incredible Stories You Never Heard About Harry Houdini