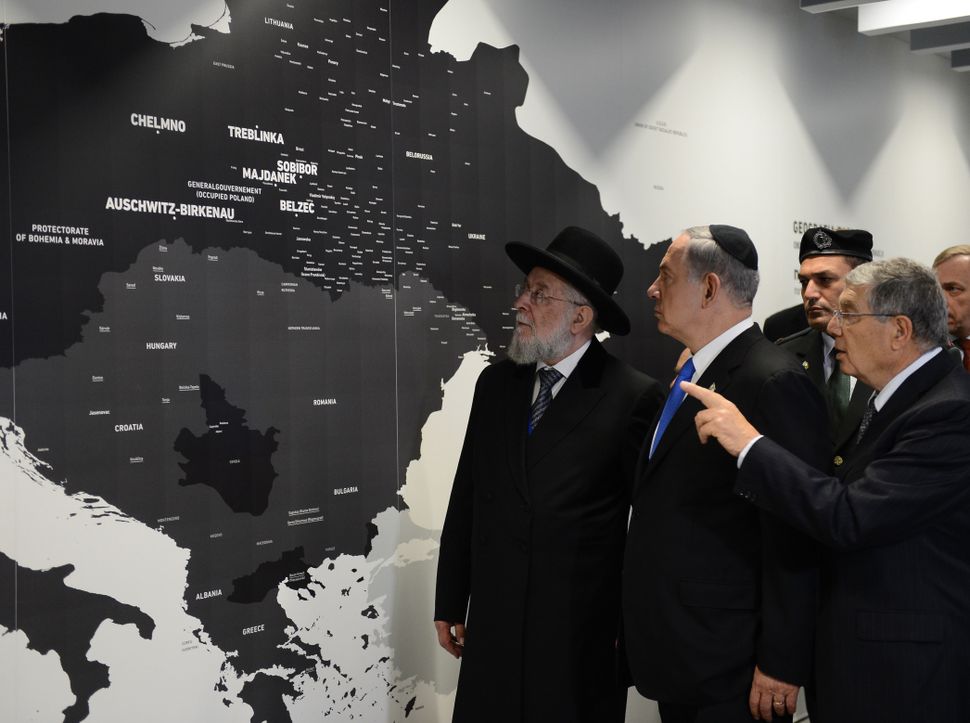 Yad Vashem Chairman Avner Shalev, Israeli Prime Minister Benjamin Netanyahu and Rabbi Yisrael Meir Lau point at a map showing where Jews were killed during the Holocaust at the opening of the Permanent Exhibition SHOAH at former Nazi death camp in the Auschwitz-Birkenau State Museum. Image by Getty/JANEK SKARZYNSKI/Staff

Following public complaints from the Polish government, Netflix will add explanatory notes to World War II-era maps showing the location of concentration camps used in its documentary series “The Devil Next Door.”

The move by the streaming giant, reported by The New York Times, follows a letter of complaint from Polish Prime Minister Mateusz Marawiecki to Netflix CEO Reed Hastings. Marawiecki took issue with maps from the series that showed the location of concentration camps in modern-day Poland, claiming the graphics did not do enough to clarify that the concentration camps were devised and operated by the Nazis during the German occupation of Poland.

Mariewiecki said of one map used that it was “not only incorrect, but it deceives viewers into believing that Poland was responsible for establishing and maintaining these camps, and for committing the crimes therein.”

A spokeswoman for Netflix told The Times on Thursday that the maps will be amended with text explaining the Nazi control of the camps. She said that the decision was a response to complaints from subscribers, and not Morawiecki’s letter.

The spokeswoman added that the added context will “not leave any room for misunderstanding.”

Netflix said it hoped to have the text added in two days, during which time the series will stay on the platform.