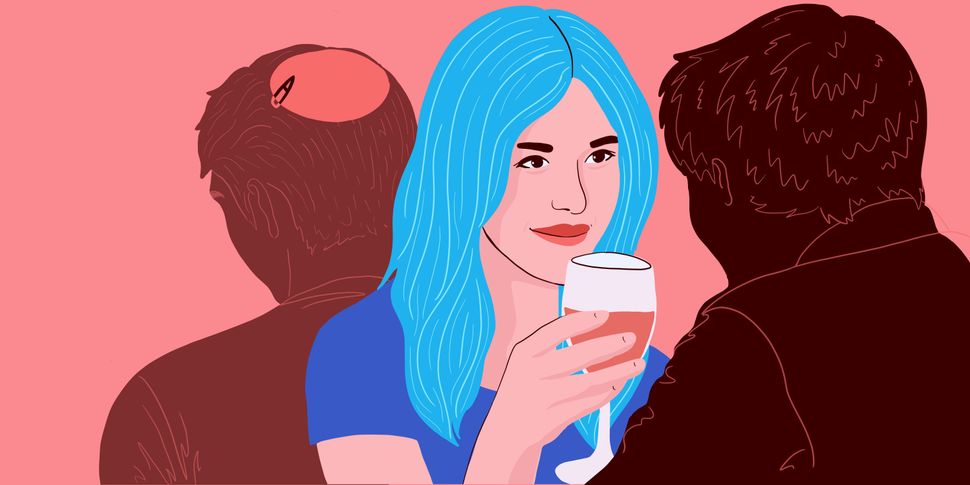 It was a Sunday morning, the third or fourth time I slept over. I woke up to the feeling of his hands running through my hair, like a novice hairdresser procrastinating making the first cut.

“Can I ask you something?” He sounded nervous. I opened my eyes and saw the numbers on the digital clock blinking 6:57. I closed my eyes.

His hands combed urgently through my hair. His breath quickened. I felt his heart slamming, timpani-like, against my shoulder blade. Suddenly fully awake, I braced for a bombshell.

“What is AIPAC?” he whispered.

“What is AIPAC?” he said, adding more fervently, “And what — what happens on Shabbat?”

And that’s when I decided – enough. No more dating non-Jews. I shouldn’t have to explain the American Israeli Public Affairs Committee before brunch, and I won’t. So long to my salad days of pretending that I don’t think about the Holocaust every six minutes, I thought. Time to literally kiss non-Jews goodbye.

But I was wrong, wrong by a mile (of foreskins.) That wasn’t my last non-Jew, not at all. Because let me tell you something: Even if you live in the state that has the highest number of Jews per capita, even if you have the patience of eighteen therapists when it comes to rehashing bar mitzvah trauma, even if you try hard and your mind is totally made up, it’s hard to only date Jews.

The scourge of interfaith marriage is a topic many Jews are surprisingly wild for, given its capacity to pull down close relationships brick-by-brick. Growing up, I bought the idea of intermarriage as it is portrayed in “Fiddler On The Roof” — Jewish girl marries Christian boy, cuts out her parents’ hearts, they never see each other again.

But there’s nothing morally wrong with marrying a person who isn’t Jewish. And there’s something gloriously tragicomic about thinking that a community can and should influence marriages by threatening people with shunning, then actually shunning them.

Jews coupling up with non-Jews isn’t new or inherently harmful to Jewish continuity — intermarriage has always existed in Jewish history. (That’s why Moroccan Jews look Moroccan and Indian Jews look Indian and Polish cab drivers always want to talk to me in Polish.) Besides, if you’re really concerned about retaining Jews, may I suggest not alienating them?

But some Jews do want to date other Jews. It’s not any more discriminatory than wanting to date someone who enjoys hiking or supports the same baseball team as you. But it is limiting.

In my work covering dating for the Forward over the past two-and-a-half years, I have met hundreds and hundreds of people who are trying to find love with another Jewish person. I’ve seen people uproot themselves and move to different cities, quit their jobs so they have more time to focus on dating. I’ve seen people spend money on matchmaking services, and singles getaways, and makeovers and advice and gallons of alcohol. And that’s in New York, where Jews are as common as cheese pizza.

Like many of these people, dating Jews is my preference because I want to do Jewish activities and speak about Jewish things and not feel like I’m running a one-woman Introduction To Judaism class. But unless you’re in an exclusively Jewish community, tracking down Jews to date is a struggle.

I only dated The Non-Jew for a short time, but thanks to the Jewish calendar it was still onerous. I reenacted the Purim story, broke down the symbolism of the Seder plate, tried to reacquaint myself with the Omer. It could have been worse. We could have started dating in August, then I would have had to shepherd him through Rosh Hashanah, Yom Kippur, Sukkot, Shmini Azeret and Simchat Torah. I imagined the hundreds of questions he would have if he ever spotted a group of Jews moaning and huffing spices around a column of flame, or as it is known by some, Havdalah.

For a few years after the early morning AIPAC-attack, I stayed on the path — an AEPI bro here, a Young Judea graduate there, an Israeli for diversity. Then one day, I slipped and went out with a person whose religion I didn’t know. The date wasn’t even happenstance — I had ordered him off an app, like pad thai. I wasn’t looking for anything serious, I told myself. And there was a chance, wasn’t there, that he was Jewish? He was tall, but that can mean anything these days, what with access to animal proteins. He was polite, but politeness is a side effect of any number of ethnic and religious backgrounds. He grew up on the Upper West Side, which might as well have thrown my Jewdar into a bucket of whitefish. He wore thick-frame eyeglasses, but those have become omnipresent in a way that precludes them any longer being a shibboleth for members of the tribe.

I tried to draw him out. I brought up Jewish TV shows – nothing. I name-dropped Jewish lifecycle events – nope. Finally I got him, on Passover.

“I know one of the prayers!” my date said, explaining that he had Jewish family but wasn’t brought up Jewish. He had a crazed mid-Atlantic accent with a slight-lisp, like a Kennedy who was raised at a truck stop. He cleared his throat, and shouted, “BARUCH! ATAH! ADONAI!”

Laughing, I imitated him. “Baruch! Atah! Adonai!” I said.

He visibly recoiled. “It’s not very sexy when you do that,” he said.

This is where I have to disagree with him. One reason, I think, that it’s hard for Jews to date each other is that many Jews have bought into the idea that Jewishness isn’t sexy. Due to overexposure to the “Fiddler On The Roof” box set during puberty, I never internalized the Western conventions of ideal male beauty, which for most of my life has been hulking, topless whites. Spare me blond, bacon-colored men and their tedious brags about how much their ancestors flourished on the Mayflower, I say! Give me a man whose eyebrows you could jump in to hide from Hitler.

This is it, I told myself. My last non-Jew, or at least the last person I date who only interacts with Judaism as a meme.

But of course, he wasn’t.

My dad called me on a Friday afternoon. “What are you up to tonight?” he asked, timidly. “Maybe go to synagogue!” he said, in the half-hopeful cadence of an owner coaxing a cat to piss in a box. “Check out some cool services!” But that night I had other plans. I had plans to go axe-throwing with a former Evangelical.

This time I had been actively deluding myself. I was burnt out on paying $36 for singles dinners in synagogue basements and tired of limiting my dating app preferences to Jews Only. My evidence that this man was Jewish was that he had the first name of a Torah patriarch, and brown hair. Case closed, I thought. He was certainly loitering around Sinai! Wrong again. As we trotted through Union Square on our second date, I tried interfaith dialogue.

“Practically, Christianity and Judaism share, like, tons,” I babbled. “The Old Testament! The power of good works! Loving and praising one god!”

“Jenny,” he said. “You are describing Judaism.”

Axe-throwing is where you go to a dungeon-like space and pay all of your money to throw rusty blades at a wall. It is bowling, for people who are so cynical about the American healthcare system that they want to demonstrate its uselessness. I was paralyzed with anxiety. The non-Jew might as well have taken me golfing on top of an active volcano. “This would never have happened with a Jew,” I seethed, even though that’s definitely not true.

Axe-throwing, I felt, demonstrated exactly why I needed to lie down in a JCC parking lot and wait for a man or the elements to take me. I was taught to treat my safety as a family heirloom that had been carried around Europe, across an ocean, and through depressions and wars. I was taught that caution was a sacred value, a Jewish value. Flinging knives for sport felt like not quite in the spirit of that.

As kabalat Shabbat services across Manhattan swung open their arks and sang “Aleinu l’shabeiach,” I released dozens of axes and knives in the direction of the wall. Their dull blades thudded around me, and I screamed the scream of a woman who might want to learn piano some day. I am forgetting where I came from, I thought, as an instructor showed how to throw multiple axes at once. Someone shove a shmurah matzah in my mouth and lock me in a room with a copy of “The Chosen,” stat.

I never went out with that non-Jew again. But I’ve gone out with others, from time to time, the way a red wine snob might occasionally sample a Sancerre. Now that I’ve acknowledged that this is a habit, I try to at least lean into it. “Tell me more about being Catholic,” I say to the boy I’m seeing as we walk past a church, stretching out the word so it has three syllables, like riding crop. I prick up my ears for stories about the tasting the blood of Christ, about the violent nuns, about a sense of great beauty, just out of reach.

“Jenny,” he says, patiently. “I told you, I’m not Catholic. I was just raised Catholic.”

And he explains again that he isn’t Christian, he isn’t anything at all. That he stopped going to church, and stopped being a Christian. I say, “You can’t just stop” and he says, “Yes, you can.”

And I think about how it would feel to be able to just stop, just opt out. To let a part of yourself end. How things would be different if Judaism was something that you could slip off like a dress. I’ve never seen that. However you practice, whatever you believe, and whoever you marry, you will always have this special disaster — the world will not let you wrest from yourself this thing that you are.

I look at the man. We have lots in common even though he dropped his religion like an Apple airpod and I could no more easily stop being Jewish than replace my blood with buttercream.

Jenny Singer was the life/features editor for the Forward. She is now a staff writer at Glamour. You can reach her on Twitter [@jeanvaljenny](https://twitter.com/JeanValjenny