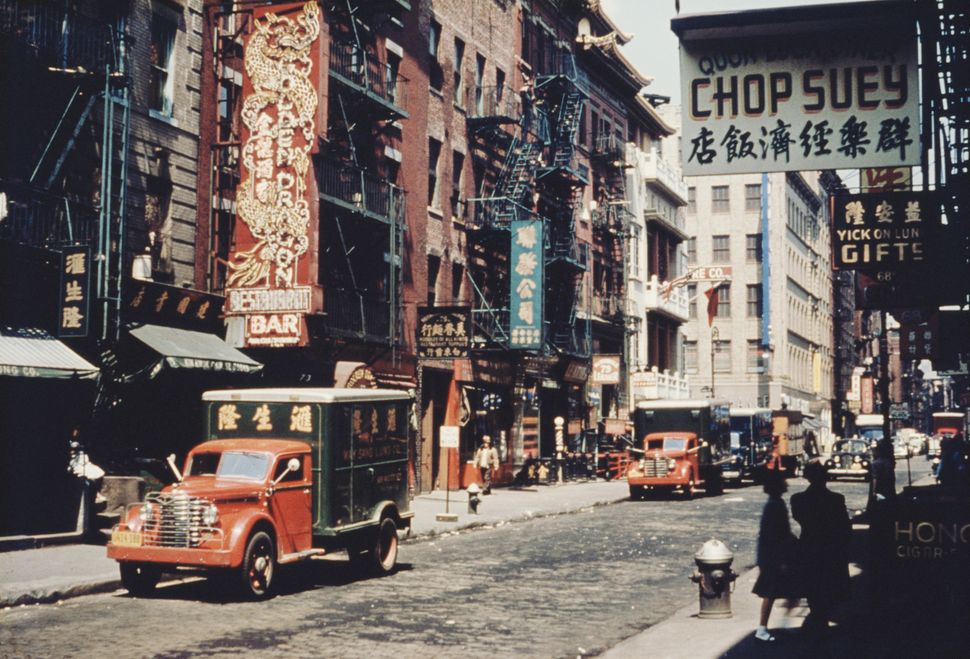 Every year around this time a certain handwritten sign goes viral on Jewish Facebook: “The Chinese Rest. Assoc. of the United States would like to extend our thanks to The Jewish People. We do not completely understand your dietary customs… But we are proud and grateful that your GOD insists you eat our food on Christmas.”

The holiday message is in all likelihood a fabrication, but the tradition behind it? Not so much.

“I checked with other American Jewish historians,” Joshua Eli Plaut, author of “A Kosher Christmas: ‘Tis the Season to be Jewish” and rabbi of the Metropolitan Synagogue of New York said of the sign. “We have found no evidence of this being authentic or not. It’s urban folklore. But it doesn’t matter because the message is funny and it just goes to show you this is a real phenomenon.”

While it’s not prescribed in Jewish texts that we do anything on Christmas, let alone eat our weight in baby corn and water chestnuts, American Jews have a long history of breaking out the chopsticks in late December while Christians are slicing into honey-glazed ham.

Jews either do takeout, filling their wreathless homes with white cardboard containers and smiley-faced plastic bags, or hit the town for some pre-movie chow fun. Plaut said the latter practice is known in Yiddish as oysessen — eating out — and was coined in this very publication in 1903, to describe the trend of Jews coming down from their tenement coops to enjoy the fine cooking of their Chinese neighbors on the Lower East Side. But the trend goes back even further than that, beginning at the tail end of the 19th century with an early wave of Eastern European immigrants.

“The Jews and Chinese were the two largest non-Christian immigrant communities in America,” said Jennifer 8. Lee, author of “The Fortune Cookie Chronicles: Adventures in the World of Chinese Food,” producer of the documentary “The Search for General Tso” and co-founder and president of the literary studio Plympton. “They didn’t keep a Christian calendar so their restaurants were open on Christmas.”

According to Plaut, the first documented instance of what we now know as a “Jewish Christmas” in English dates back to a 1935 New York Times article that mentioned a restaurant owner named Eng Shee Chuck who brought lo mein to the Jewish Children’s Home in Newark, N.J., an example of what Plaut calls a “Christmas mitzvah.”

But as we know, Chinese food is an evergreen staple of many a Jewish home. Alongside the Ha-Motzi, moo shoo is among the first non-English words learned by American Jewish babies. The Forverts of the early 1920 and ‘30s didn’t lack ad space for many popular Chinese-American restaurants year round, and even around Jewish holidays.

An ad from the September 16, 1936 Forverts wishing Jews shanah tova. Image by The Forward Archives/Chana Pollack

“We Wish All Jews A Happy New Year,” reads a Rosh Hashanah note from Chin Lee, the owner of Chin’s on Broadway and 44th Street placed in the Sept. 16, 1936 issue of the paper. That same year, Plaut told me, The East Side Chamber News reported the opening of 18 new Chinese tea gardens and chop suey restaurants within a few blocks of Ratner’s, at the time the most popular kosher dairy restaurant in Manhattan.

Part of the early appeal of Chinese restaurants lay in the fact that the eateries, unlike many Italian establishments, lacked Christian iconography in their decor. Chinese food itself was accepted because many Jews believed (or chose to believe) that egg rolls and their ilk were kosher.

“There are no Christian symbols on the walls,” Plaut said. “There’s no mixing of meat and dairy, and the pork that is evident is hidden. Hence the phrase ‘safe treyf.’ You can’t see it when you eat it so it’s OK. And the steamed pot sticker looks to be the equivalent of kreplach.”

Beyond seeming to keep kosher there were other considerations for newly arrived Jewish immigrants. Lee noted that three or four generations back, Jews were self-conscious about their standing in America. In Chinese restaurants they found a non-judgmental crowd happy for their patronage.

“Chinese people didn’t look down on Jews as being less American in terms of Westernness because Jews were a lot closer to being perceived that way than they were,” Lee said. “It was also very exotic and cosmopolitan and a way to impress girls when you go on dates. And it tastes good!”

A Forverts advertisement from Dec. 2, 1922 speaks to this social phenomenon. 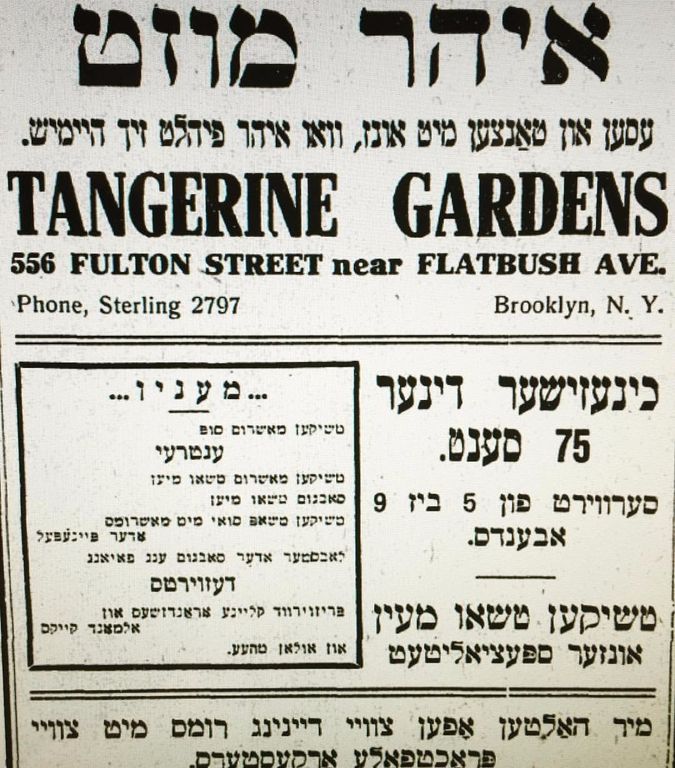 An ad that ran in a December 1922 issue of the Forverts. Image by The Forward Archives/Chana Pollack

“YOU MUST eat and dance with us, where you’ll feel at home,” reads an ad from Tangerine Gardens on Flatbush Avenue and Fulton Street. Another 1922 ad from the restaurant boasts of nightly entertainment from 5-9 PM, a huge dance floor and seating that banquet accommodations for up to 600 guests.

While many of today’s Chinese bistros are less extravagant, they still serve a festive function. Around Christmas, American Jews can feel alienated, and so the communal aspect of eating out proves essential to surviving the season.

“It’s the only national holiday that American Jews feel a certain discomfort with because of the religious underpinnings,” Plaut said. “That’s why people, rather than staying home and perhaps sulking or feeling idle, say ‘it’s a day off. Why not get together with family and friends?’”

Plaut said that Jews’ social calendars on Christmas are varied and have been for some time. Many tri-state area Jews in the ‘40s and ‘50s made an exodus to Grossinger’s to hear Borscht Belt legends (sorry “Mrs. Maisel” fans, Midge wasn’t on the bill). Contemporary Jews living in Boston may flock to a Klezmer concert. Some American Jews even make their way across the pond where Limmud, a worldwide network of Jewish study, holds Christmas-time conferences.

But for many American Jews who feel like staying local, Christmas means getting Chinese and maybe hitting up a Jewish deli on Christmas Day. Plaut believes that, strangely enough, the delis followed the lead of Chinese eateries in this tradition.

While the time-honored custom of wonton soup during yuletide has its origins in New York, it is now a national habit for American Jewry. As Jews spread throughout the country, Lee noted, Chinese restaurateurs followed some of their best patrons out to the suburbs.

But don’t just take the experts’ word for it, the data proves that search results for Chinese cuisine spike toward the end of December.

“The Chinese restaurant has become a place for us to announce our identity and a place where identity expresses itself in a Jewish way on Christmas Eve and Christmas Day,” Plaut said.