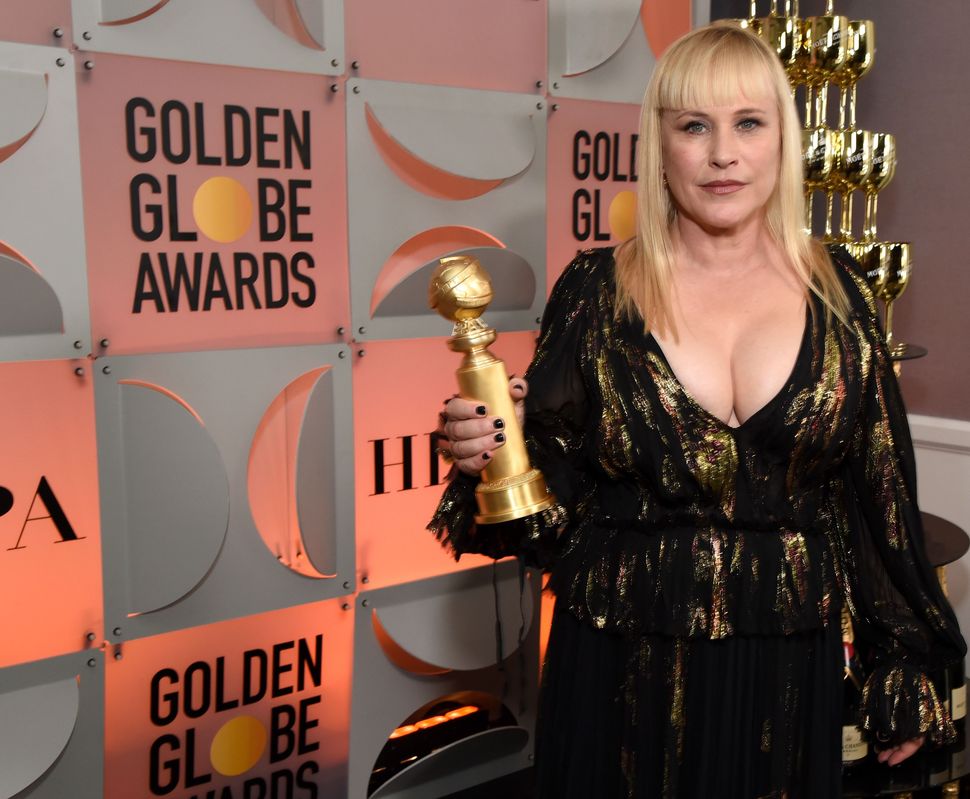 Ah, the Golden Globes. The Oscars’s boozy, antic European cousin. It seems like each year the Hollywood Foreign Press-hosted event reflects a larger conversation around race, gender and politics — but often with a lag. When Ricky Gervais hosts, there is, along with an air of celebrity ego-slashing, there’s often a literal delay to mute out any cursing. But this year it all felt like a dirge. And it didn’t help that everyone seemed to be wearing sunglasses.

Gervais, barely onstage and holding flashcards for most of that time, appeared resigned and comedically-neutralized as celebrities used their time at the mic to flout the complacency he accused them of and despair over the state of the world. He said upfront that the celebs were in “no position to lecture anyone” — an irony that went unremarked as the comedian proceeded to plug his Netflix show. Gervais even accused the A-listers present of being buddy-buddy with Jeffrey Epstein, who, the host claimed, offering a now thoroughly unshocking conspiracy theory, was murdered.

Rami Youssef, who accepted his award shortly after Gervais made a snide remark about people thanking God in their speeches, did just that. “I would like to thank my God,” Youssef, who is Muslim, said. “Allahu akbar.”

Yousef, who is the first person of Egyptian heritage to win a Golden Globe for Best Lead Actor in a Comedy Series for his show “Ramy,” admitted that his mom was rooting for another nominee, Michael Douglas for “The Kominsky Method.” “Egyptians love Michael Douglas,” Yousef said, “I don’t know if you know this.”

“The Kominsky Method,” which has won for Best TV series and Best Actor for Douglas last year, didn’t take home any awards. But another LA-based project,“Once Upon a Time… in Hollywood,” won for Best Screenplay. In his speech for the screenplay award, Tarantino tipped his hat to his Israeli wife, singer and model Daniella Pick, telling her “Toda giverat,” Hebrew for “Thanks, ma’am,” and paid homage to his Jewish screenwriting hero, John Milius.

Continuing one of the weirdest feuds in celebritydom was Sacha Baron Cohen, who, while not awarded for his role as Israeli agent Eli Cohen in “The Spy” took time in his presentation of “JoJo Rabbit,” a nominee for Best Picture – Musical or Comedy, to call out a certain tech CEO.

“The hero of this next movie is a naïve, misguided child who spreads Nazi propaganda and only has imaginary friends,” Baron Cohen read, from a paper he appeared to have brought himself. “His name is Mark Zuckerberg.”

Baron Cohen, who has been beefing with Zuck since his keynote at the ADL conference, was not the last Jew to get political in the ballroom.

Joaquin Phoenix, who won Best Actor in a Drama for “Joker,” touched on the climate change-influenced infernos in Australia, as did Russell Crowe, who won for his performance as Roger Ailes in “The Loudest Voice,” and was kept home by the brush fires. Most of Phoenix’s speech, which excoriated his peers in Hollywood for taking private jets, was muted by censors for his swearing. You could, however, hear him thanking “Joker” director Todd Phillips.

The fire in Australia wasn’t the only reminder of the horrors of the Anthropocene. We even got a throwback to another nightmare. Craig Mazin’s “Chernobyl,” about the infamous Ukrainian nuclear meltdown won for Best Limited Series, with Stellan Skarsgaard winning for Supporting Actor in a Limited Series for his role on the show.

If “Chernobyl” (somehow) convinced you that incompetent governments were a thing of the past, Patricia Arquette, made a case for the danger of the current moment. The Emmy- and Oscar- and former-Golden Globe-winner, who won Best Supporting Actress in a TV Series for her role in Hulu’s “The Act,” said that we were in a bleak moment in history with America “on the brink of war,” with “a President tweeting out a threat of 52 bombs including cultural sites. Young people risking their lives traveling across the world. People not knowing if bombs are going to drop on their kids’ heads and the continent of Australia on fire.” She ended by telling everyone to vote in November.

As if this weren’t already grim enough, the evening kept on rolling with little in the way of levity. Even Ellen DeGeneres and Tom Hanks winning special awards did little to brighten the festivities so dragged down by the mess of this not-even-a-week-old decade.

Best Comedy was awarded to “Once Upon a Time in… Hollywood,” a film that posits an alternate ending for the Sharon Tate murders. Funny? But the big winner of the night was Sam Mendes for his WWI film “1917.” Mendes, who grabbed a Tony just last year for his direction of “The Ferryman,” won for Best Director. (We should note here that no women were nominated for director this year, even though women-directed films were nominated in other categories, including Awkwafina’s historic win for Lead Actress in “The Farewell”).

Mendes thanked his grandfather Alfred Hubert Mendes, a veteran of The Great War.

Given Arquette’s warning of upcoming hostilities, let’s hope the film about a 103-year-old conflict ignited by a high-profile assassination isn’t prescient.