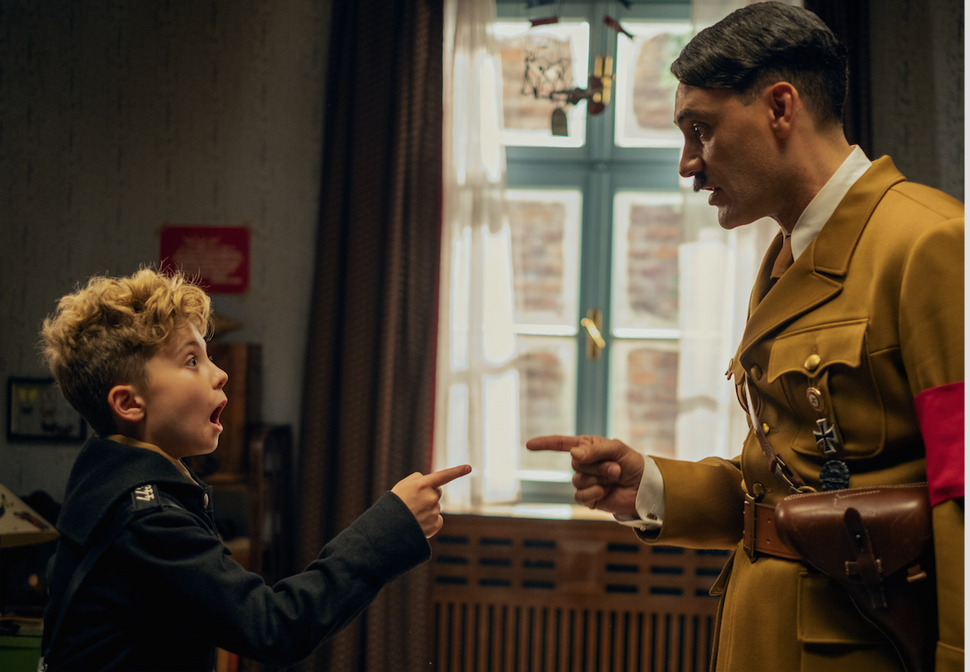 It’s the twilight of World War II and, from JoJo’s perspective, things are going most spiffingly. He lives in a tiny German town with buildings that look like iced buns, and spends his days running through verdant fields in short-shorts, flicking explosives at imaginary Jew-devils with other eager members of the Hitler Youth. His mother (Scarlett Johansson, successfully rebuking the slice of the world that doesn’t find Scarlett Johansson charming) is a perfect playmate, and his best friend Yorki (Archie Yates) is unthreatening and dependable.

He barely notices that his family has begun to starve, that there are bodies hanging in the town square, that his mother seems preoccupied with some mysterious project. Sure, JoJo (Roman Griffin Davis) can’t quite bear to wring the neck of the wild rabbit the older boys find and goad him to kill, but he’ll get the hang of the whole murder thing soon. And when he’s lonely or worried, his friend Hitler (Taika Waititi) always has a kind word to spare.

Yes, this is 1945 Germany as seen through the funhouse mirror in the mind of Jewish and Maori creative Taika Waititi. Waititi, an indie darling for his direction of the 2014 “What We Do In The Shadows,” made off with mainstream hearts when he directed the surprisingly delightful “Thor: Ragnarok,” the third “Thor” movie from Marvel, in 2017. He’s the director, screenwriter, and stumpy mustache-wearer behind “JoJo Rabbit,” which he adapted from Christine Leunens’ novel “Caging Skies.” This, his most ambitious entry, is billed in trailers as “A Satire That Goes To War On Hate.”

Waititi’s Hitler is Hobbes to our protagonist’s Calvin — a gleeful, erudite companion who only JoJo can see. Maori-Jewish jokester Hitler was the subversive selling point of “JoJo Rabbit”; in fact, Waititi’s charming, bug-eyed Hitler is a dullish sideshow, like watching the talented actor do a too-long imitation of Charlie Chaplin’s “Great Dictator.” Waititi joins a depressing tradition of recasting Nazis as spittle-flinging, manic comedy villains instead of a supremely organized genocidal army. If satire is meant to expose, we can barely see Hitler’s big toe here, and what we do see isn’t new. “The Producers” did it, the Three Stooges did it, the German movie “Look Who’s Back” did it this very decade. Waititi’s jokes aren’t as funny, and our expectations that a legendary hipster will better understand the machinations of evil than his predecessors makes this a little dreary. “JoJo Rabbit” starts getting good movie when Waititi/Hitler largely disappears from the screen. 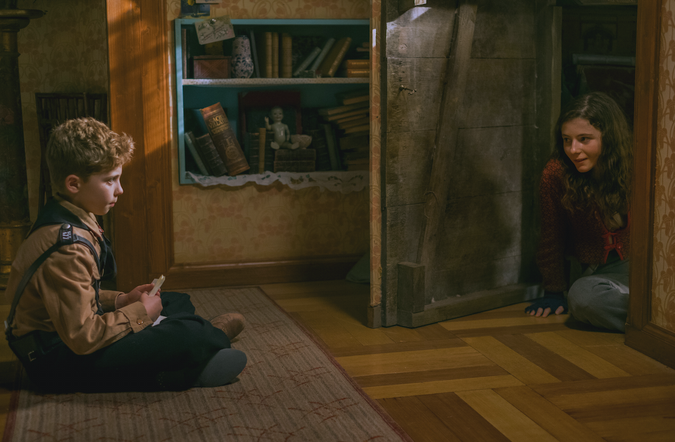 Finally, Waititi admits that for all the book burning gags, this is a story about world war and the Holocaust, and that means we’re not in a comedy at all, we’re in a horror movie. JoJo’s mother is working for the German resistance. She’s hidden a teenage girl, Elsa (Thomasin McKenzie) behind the walls in the bedroom of her dead daughter, who was in Elsa’s class. JoJo — who declares himself “massively into swastikas” — prepares to kill Elssa, but she pins him, and threatens that exposing her will endanger him and his mother. “You are weak, like an eyelash,” the shockingly good McKenzie tells JoJo, pinning him and siezing his knife. “We are descended from those who wrestle angels and kill giants. We are chosen.”

After becoming partially disabled in an accident at a Hitler Youth training, JoJo is consigned to the house, where he attempts to prod Jew-facts out of Elsa for a self-published propaganda book, demanding intel on the fact that rabbis use foreskins as earplugs. Instead, it becomes a crooked meet-cute — a starving, hunted orphan girl, and a lonely, injured, fatherless boy. This dynamic — beautiful girl teaches violent boy to love, earns right to live — could easily earn feminist criticism. But Waititi gives Elsa the fierce, funny humanity rarely granted to people society sees as victims, including Elsa’s obvious doppelgänger, Anne Frank. (Less successful is the cloying and Disney-ish Nazi captain, played by Sam Rockwell, who somehow goes from bloodthirsty Nazi to twinkly-eyed Raoul Wallenberg. In moments like these, Waititi seems willfully ignorant of how few people actually chose to defy Nazism.)

JoJo and Elsa bloom in tandem, until things go terribly wrong and the two children are alone in the house, and the Nazis are coming, and nothing is funny anymore (okay, Stephen Merchant playing a Gestapo leader is pretty funny, and scary.) Germany is surrounded, and in the cacophony of tanks and bombs as JoJo’s town falls, the movie strips away any notion (perpetuated in early scenes) that Hitler Youth were a cheery band of racist Boy Scouts — rather, they were child soldiers bathed in hate then used, in some cases, as human shields.

Do we need another Nazi movie? Do we ever need a Nazi comedy? We need this one. Waititi reels us in with the mildly subversive promise of a funny, brown, Jewish Hitler, then quietly pops us over the head with a fable on fanaticism, and how it can be redeemed. Instead of a reductionist holler of “things now are just like things back then,” Waititi uses the relationship between a Nazi child soldier and a fierce Jewish girl to show that fanaticism and extremism haven’t changed, and neither have their antidotes. The final shots of JoJo and Elsa, peeking into the sunny square, will slice open your heart like the dull blade of a fahrtenmesser (amazingly, the name of the knives used by Hitler Youth.)

Unless your social studies teacher did you really dirty, “JoJo Rabbit” won’t offer you anything too new, or nuanced. But bring your kids to “JoJo.” Bring your sons. The subject matter — a social movement imbues white boys with a sense of superiority and hands them weapons and a plan — is, sadly, child-friendly. The “Shitler” puns are just a bonus.