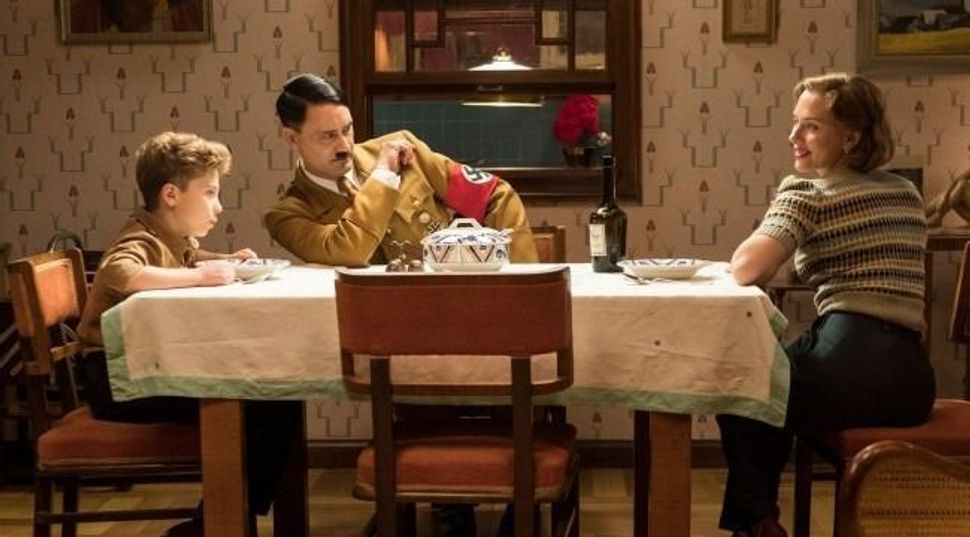 “It was very strange for me to have to put on the suit and put the mustache on or things like that,” Waititi said to a reporter at the Karlovy Vary International Film Festival, according to the Jeruaalem Post. “It’s quite confronting and I don’t necessarily like seeing myself like that.”

The half-Jewish and half-Maori Waititi cast himself as Hitler in “Jojo Rabbit,” which he is also writing and directing. The movie follows a German Nazi youth, Jojo (played by Roman Griffin Davis), who discovers his mother Rosie (Scarlet Johansson) is hiding a Jewish child in their house. Waititi’s Hitler serves as a more fictionalized imaginary friend for the confused Jojo.

“I play an imaginary friend who is sort of a kind of cross between Hitler and all this little boy’s heroes,” Waititi said, according to the Jerusalem Post. “So it’s all kind of combined into this weird version of… it’s not Hitler, I’m not trying to play that character, so I didn’t do much research since…I’m not trying to be authentic.”

Waititi has already proven himself as both an indie and blockbuster aficionado. Waititi directed the wildly popular “Thor: Ragnarok,” which grossed $854 million worldwide. He also voiced gentle rock revolutionary Korg in “Ragnarok.”

Waititi made a splash on the indie scene in 2014 with “What We Do In The Shadows,” which he co-directed, co-wrote, and starred in. The mockumentary horror comedy followed a group of vampire roommates trying their best to navigate modern life. It recently scored an American spin-off on FX.

Waititi’s propensity for kookier projects and roles, combined with the subject matter he’s tapped in “Jojo Rabbit,” will certainly result in a one-of-a-kind portrayal of Hitler. He’ll be starring alongside Sam Rockwell, who plays a Nazi captain, and Rebel Wilson, who plays a Nazi camp counselor.

While Waititi may be spending the next few months embodying his loose interpretation of the dictator, he’s been unflinching in sharing his thoughts on the man himself.

Week one down of our anti-fuckface satire, Jojo Rabbit. Can’t wait to share it with the world. Also, what better way to insult Hitler than having him portrayed by a Polynesian Jew?
? #FuckYouShitler @jojorabbitmovie @foxsearchlight pic.twitter.com/bNZ2YlDgaF