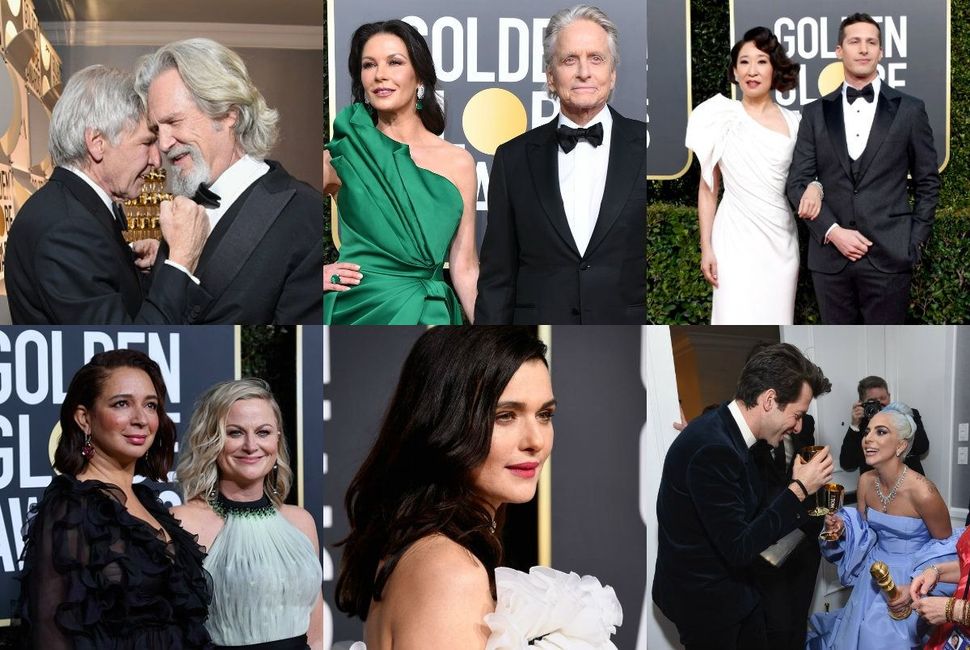 The 2019 Golden Globes began with a Jewish co-host examining the fine line between Jewish comedy and internalized anti-Semitism. Then, a Jewish Hollywood A-lister shouted the Yiddish phrase for “old s*****r.”

1.Andy Samberg represented our people alongside the godly Sandra Oh. Samberg snuck some of his typically understated pitch-black humor into the somewhat tepid awards, including this introduction for Bradley Cooper and Lady Gaga: “He discovered Ally, and she discovered him in the garage!” And this icy burn, for CBS stars: “Now here with a surprising unrehearsed takedown of Les Moonves, the cast of ‘The Big Bang Theory!’” His best line was a description of “The Marvelous Mrs. Maisel,” which he called, “The show that makes audiences sit up and say, ‘Wait, is this anti-Semitic?’”

2.The most unreservedly Jewish moment of the evening: Michael Douglas won for Chuck Lorre’s “The Kominsky Method,” beating Sacha Baron Cohen, thanking co-star Alan Alda, and dedicating it to his father Kirk Douglas, ending by roaring, “Alte Kakers rule!” Bialys raining from the ceiling would not have been out of place.

3.The adorkable boys behind the runaway hit “Spider-Man: Into the Spider-Verse” accepted a win, citing the message of their black Puerto Rican protagonist: “Anyone can be behind the mask. We’re counting on you.” Rodney Rothman, who co-wrote the movie, which briefly offers up a vision of a Jewish Spider-Man, is one of our own.

4.Rachel Weisz, nominated for her role in “The Favourite,” said “tongue-lashing” on television.

5.Creator and writer Joe Weisberg accepted the Globe for Best Television Drama for the final season of “The Americans.”

6.Alan Arkin and Henry Winkler were up for Best Supporting Actor in a television show but lost to Ben Wishaw. Nevertheless, Winkler looked indefatigably cheerful throughout, and Arkin looked unmistakably stormy.

7.Ben Stiller lauded a glowing Jamie Curtis for her record-breaking opening in “Halloween,” and admitted that last year he starred in “Nothing.” Ben Stiller is our nominee for the elusive award — white male actor who, against all odds, has grown more charming and mensch-y as he’s aged.

8.Patricia Arquette won Best Supporting Actress in a television show for “Escape at Dannemora,” delivering an exceptionally thoughtful speech, thanking her fellow nominees, the Hollywood Foreign Press Association, the show’s DP, hair and makeup department, the person who put in her contact lenses, the people who made her fake teeth, the crew, and the prison employees and formerly incarcerated people who helped the actors and creatives inform their work.

9.Sandberg and Oh invited a crew of white-coat-clad nurses to deliver flu shots to audience members. “If you’re an anti-vaxxer just put a napkin over your head and we’ll skip you,” he cheerfully said.

10.“La La Land” musician Justin Hurwitz nabbed another statue, this time for Best Original Score for “First Man.” Like Arquette, he gave impressively comprehensive thanks. At this time we feel comfortable giving him the designation “Nice Jewish Boy.” Wear it well, Hurwitz.

11.Now is the part of the list where we reveal that Timothee Chalamet was strapped into a bedazzled halter throughout the evening.

Is Chalamet skating his short or long program tonight

12.In a segment of the evening as emotionally riotous as a live circumcision, Mark Ronson and Lady Gaga accepted the award for Best Song for “Shallow,” the breakout hit from “A Star Is Born.”

13.Announcing their intention to show the most “inspiring” moments from Globes past, Sandra Oh and Andy Samberg played footage that just included each of them winning a Golden Globe. “What? We said they inspire us,” Oh said. A few minutes later, she tearfully accepted her second Globe, bowing low to her grinning parents in the audience, and thanking them in their native Korean.

14.Rachel Weisz lost Best Supporting Actress for “The Favourite” but looked like a goddess! In her acceptance speech, the radiant Regina King pledged to hold herself to a 50/50 gender breakdown in everything she produces, and challenged people in all industries to do the same.

15.During commercial break, a trailer for the Ruth Bader Ginsburg biopic “On The Basis Of Sex” played, augmenting the awkwardness that the buzzy drama was completely shut out of nominations. More’s the pity, because of attention for codifying women’s rights and such, and also because it robbed us of seeing what Armie Hammer would have looked like at the Golden Globes.

16.Maya Rudolph and Amy Poehler shared a hysterical bit about supporting actors, and then a just-okay bit mocking the surprise marriage proposal at the 2018 Emmy awards. The only thing that matters is that our girls were enjoying themselves.

17.Timothee Chalamet lost Best Supporting Actor in a movie drama to Mahershala Ali, but don’t we think a few hard knocks are probably good for this child sex-symbol’s ego?

18.Patricia Clarkson beat “Mrs Maisel” star Alex Borstein. Both women are queens! If I had a small gold statue with a purely symbolic value, I would let them share it.

19.Harrison Ford, looking haute-ly elderly, announced the Best Director of a movie category, graciously saying, “Look, I’ve been lucky enough to work with some of the best directors in our industry and anyone who’s in a film led by one of these fine people could say exactly the same thing.” Sweet. But it can’t hold a havdalah candle to Natalie Portman’s remark while announcing the same category last year — “Here are the all male nominees.” This year’s nominees were exactly as male as the last, FYI.

20.Rachel Brosnahan, looking like sunshine, grabbed yet another award for her delicious performance in “The Marvelous Mrs. Maisel.” The deceptively non-Jewish actress gave a moving tribute to the show’s Jewish creator, saying, “Thank you to our incredible village that it really takes to make this show, and our village is a matriarchy led by Amy Sherman Paladino.”

21.In a shocking upset, barely-known Chuck Lorre project “The Kominsky Method,” a cheerful study of aging Jewish men, clinched the award for Best Television Comedy over heavy hitters “Maisel” and “The Good Place.”

22.Another mammoth upset: “Bohemian Rhapsody” snatched Best Picture away from “A Star Is Born” and “BlackKklansman.” Producers skipped thanking Bryan Singer, who directed most of the movie but was replaced near the end of filming. Singer, who has been accused of assaulting minors, was conspicuously absent during an evening which also included a win for “Rhapsody” star Rami Malek.

23.The show, which included this riveting upset speech by Glenn Close (not one of ours, but still — some gal!) ended with credits that confirmed that the show was produced, written, and directed by Jews.