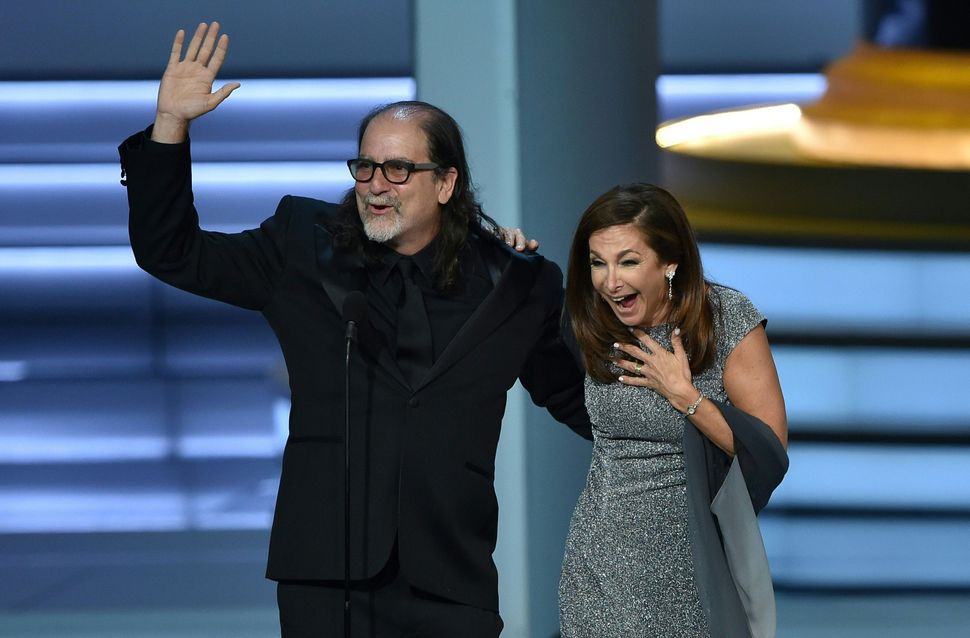 In a moment of live television that was somehow both shocking and predictable, an Emmy award winner used his 37 seconds of speech time to propose marriage.

Three-time director of the Academy Award ceremony Glenn Weiss paused the entire 2018 Emmy Award ceremony on Monday night when he took the stage to accept the award for Outstanding Directing for a Variety Special and took the opportunity to propose to his girlfriend.

Weiss, accepting his 12th Emmy award, is a veteran of live television, with three Academy Award ceremonies, 16 Tony Award ceremonies, as well as Kennedy Center Honors, BET Award shows, and Emmy Awards under his belt. When his name was called, he kissed his girlfriend, hugged Jimmy Kimmel, and strode onstage, mullet swinging — and who could ask for more? And yet, he delivered — Weiss accepted the award, saying, “I’m really grateful to be here but it’s bittersweet – the person most proud to be here would be my mom, and she passed away two weeks ago.”

And the award for first (and best) proposal at the #Emmys goes to! pic.twitter.com/SRXxlBpuoW

Weiss spoke candidly about the depth of his grief, turning from mourning his mother to recalling her instruction to him that one should find “sunshine” and not let it go. “You always wonder why I don’t like to call you my girlfriend — it’s because I want to call you my wife,” he said. As stars’ faces melted from carefully contoured and highlighted apprehension to carefully contoured and highlighted joy, Weiss’ girlfriend Jan (other details still unknown!) nodded violently and strode to the stage, shaking.

“This is the ring that my dad put on my mom’s finger, 67 years ago,” Weiss said, kneeling. “And to my sisters and brothers — I didn’t swipe it, Dad knows I have it, okay?” Telling his almost-fiancee that he was asking for her hand “in front of my mom and your parents watching from above,” Weiss slid the ring onto her finger. The crowd, it hardly needs to be said, went wild. Leslie Jones, specifically deserves a special Emmy for her overwhelming joy and shock in response to the proposal.